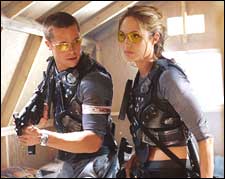 Himabindu Chitta / fullhyd.com
EDITOR RATING
7.0
Performances
Script
Music/Soundtrack
Visuals
NA
NA
NA
NA
Suggestions
Can watch again
NA
Good for kids
NA
Good for dates
NA
Wait to rent it
NA
Meet the Smith family. John Smith is an engineer by profession, a good golfer, impetuous and affable. Jane, his wife of six years, is a charming woman who stays at home and looks after the household. Together they make a normal couple leading a comfortable life in suburbia. As dull as rain on a wedding day.

Now meet the real Smith family. John is a paid assassin working for an agency named Atlanta. He has a boyish penchant for firearms, and is frighteningly brash while using them. Jane Smith is the CEO of I-Temp, a rival of Atlanta's. Beautiful and dangerous, she is a ruthless killer, and is particularly skilled at wielding knives.

The tempestuous Jane (Angelina Jolie) and the suave John (Brad Pitt) are unaware of each other's secret lives and professions. While their real-life marriage is on the rocks, an assignment to eliminate the same target leads to a head-on professional collision.

Very soon, John and Jane learn not only of each other's true identities, but also of their next mission - to kill each other within 48 hours. Time bombs tick and elevators explode as both assassins go all out to eliminate their respective targets. "Oh honey, it was just a little bomb," is all Jane has to say, when her efforts to wipe out her husband fail.

Somewhere down the line, however, the Smiths are forced to acknowledge that they do share some feelings for each other beyond the obvious antipathy. As they begin to build a new, more honest relationship, they discover the truth behind their professional spat, team up and pull off a nail-biting finish, complete with thrilling car chases, high-octane explosions and fire-spitting fancy guns.

The main thread of the story is that of a combative relationship between the two characters. You could view their parallel lives and identities as a massive allegory for lack of communication and honesty between couples. Or, you could simply go along with the premise of the story, which, though somewhat fantastic, is definitely fun to watch.

A natural actress, Angelina Jolie is in her element as the double-edged Jane Smith - dreary at home and fiery at work. Her every movement and facial expression is a treat to watch, and not just for the lecherous men. After Lara Croft Tomb Raider, and now Mr. And Mrs. Smith, there's no looking back for Jolie as far as action/adventure movies are concerned. Very few actresses could have pulled this one off, and fewer still could have done it better. It's no mean task, after all, to launch off the side of a building in a jump reminiscent of Spiderman, land safely on the sidewalk, and calmly ask for a taxi.

Brad Pitt as the swashbuckling John does not match up to expectations. Mr. And Mrs. Smith gives us a mere shadow of the Pitt we saw in Ocean's Eleven and Fight Club. His acting is ordinary in most places, and he lacks the charismatic screen presence that the role demands. This fact becomes painfully evident when he shares the frame with Jolie, who outshines him almost effortlessly. Despite the rumor mills being abuzz with stories, this pair does not sizzle on screen.

The movie is fast-paced, with racy dialogues and comic punchlines that will keep you engaged throughout. Though scripted somewhat like an adolescent version of Spy Kids, the constant undercurrent of marital discord and bitterness keeps the plot grounded in everyday realities.

On the whole, this two-hour flick has something for everyone: for those into love and relationships, the movie offers a large dose of bittersweet romance; and for those who like action, lots of James Bond effects and an array of hi-tech weapons. And who could ask for more than Angelina Jolie playing a bad girl?

This is definitely one worth your time. Best viewed with family or friends. Grandmothers are welcome.
Share. Save. Connect.
Tweet
MR & MRS SMITH SNAPSHOT

ADVERTISEMENT
This page was tagged for
Mr & Mrs Smith english movie
Mr & Mrs Smith reviews
release date
Angelina Jolie, Brad Pitt
theatres list
Follow @fullhyderabad
Follow fullhyd.com on
About Hyderabad
The Hyderabad Community
Improve fullhyd.com
More
Our Other Local Guides
Our other sites
© Copyright 1999-2009 LRR Technologies (Hyderabad), Pvt Ltd. All rights reserved. fullhyd, fullhyderabad, Welcome To The Neighbourhood are trademarks of LRR Technologies (Hyderabad) Pvt Ltd. The textual, graphic, audio and audiovisual material in this site is protected by copyright law. You may not copy, distribute, or use this material except as necessary for your personal, non-commercial use. Any trademarks are the properties of their respective owners. More on Hyderabad, India. Jobs in Hyderabad.