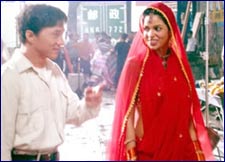 Samrat Sharma / fullhyd.com
EDITOR RATING
5.0
Performances
Script
Music/Soundtrack
Visuals
NA
NA
NA
NA
Suggestions
Can watch again
NA
Good for kids
NA
Good for dates
NA
Wait to rent it
NA
It all started with Crouching Tiger Hidden Dragon. It renewed international and domestic interest in Chinese epic cinema. The expansive film was followed by such period films as The Hero and House Of Flying Daggers. These films invented their own brand of action poetry, but borrowed liberally in presentation from the ambitious movies of old Hong Kong cinema.

Hong Kong cinema never has been one to sit back and see what's happening. Hence the renewed interest in filmmakers there to recapture the former glory of epic HK films. Stanley Tong flirts with classic Jackie Chan entertainment and epic historical storytelling in this multi-period film starring Chan as a contemporary archaeologist thwarting a plot to loot the Qin Dynasty treasure.

The film flits between modern day and ancient history, with liberal doses of action suiting both genres thrown in, but ends up feeling jarring and odd most of the times as the back and forth happens without segue. That said, this is still one of the better Chan-Tong partnerships (anyone remember Jackie Chan's Police Strike?). At the same time, the film falls prey to the risk of switching between multiple genres, letting the central point of the film be lost.

The film starts with Emperor Qin Shihuang's dauntless General Meng Yi (Jackie Chan) fending off a rebel force hell bent on nabbing princess Ok Soo (Kim Hee Seon, in her Chinese debut), who is supposed to be married to the emperor. These dynasty flashes come as a dream to modern day archaeologist Jack (also Chan), whose friend William (Tony Leung Ka Fai) wants to find a gemstone that Qin sent to India, which could possibly lead them to Qin's tomb, which is said to contain the secret for eternal life.

Jack and William plan a Tomb Raider style raid on a temple in India, where the attempt is botched, and Jack meets Samantha (Mallika Sherawat in an almost miniscule role), whose father helps him get his Meng Yi dreams in perspective, where Meng is assisting the princess as they get lost in the wilderness. They fall in love (surprise, surprise!), and are doomed to be separated in a bloody climax. This then, is the corny angle of Punarjanam being exploited, before the modern-day big fight against the baddies in the emperor's tomb.

The story's back and forth between the two periods feels oddly disconcerting, and hampers the flow of the narrative, rather than supplementing it, as might have been the intention. Tong is unable to make the past flow into the present, cinematically or thematically. He punctuates the modern day adventure with bravura action set pieces, though Jack's dreams continually obtrude on the action. The Qin dynasty story seems epic and grandiose, but the antics that cut on to their runtime feel not in sync.

Chan has enough star power to get audiences to come for this film, and as I said, this is one of the better Tong-Chan partnerships, and you can see that in the quality of the action, choreographed by Tong and Chan themselves, with long time collaborator Tak Yuen. The action in the modern day bits is impressive in parts, with trademark humor and self-deprecating laughs all along, and fans of Chan's brand of chop-socky will not be disappointed. It's just that the film wants to belong to two genres all at once, and both stories end up getting shortchanged for each other.

The Myth also is somewhat of an oddity, with Chan completely giving in to the epic mode, with lots of wire-fu incorporated into the action. There are trademark stunts and close-quarters fisticuffs, yes, but almost the entire climax is done in wire animatronics, much like the Chinese epics I mentioned. Tong et al are not at home using that, and it shows in the climactic action parts. Wire-fu is an acquired taste, so take that as you will.

In the end, the only fault that the film has, really, is the fact that it is terribly ambitious and falteringly delivers in its execution. The period drama seems constricted by the modern-day lensing, as well as the sandwich treatment it gets. The modern day Armour Of God style adventure keeps getting interrupted by, rather than augmented by, the period bits planted in between.

Let me just add that I have been a long time fan of both Jackie Chan HK-actioners and period epics, and seeing Chan tackle both as only Chan can, I was in awe of the man. Tong's halting narrative and the slightly frugal production values keep Chan from truly coming on to his own, and I will hold that against the film for some time. This is not the Jackie Chan movie you have been waiting for, but it will have to do for the moment.
Share. Save. Connect.
Tweet
THE MYTH - ADBHUTHA... SNAPSHOT
THE MYTH - ADBHUTHA VEERUDU ANDALA SUNDARI SNAPSHOT

ADVERTISEMENT
This page was tagged for
The Myth - Adbhutha Veerudu Andala Sundari telugu movie
The Myth - Adbhutha Veerudu Andala Sundari reviews
release date
Jackie Chan, Kim Hee Seon
theatres list
Follow @fullhyderabad
Follow fullhyd.com on
About Hyderabad
The Hyderabad Community
Improve fullhyd.com
More
Our Other Local Guides
Our other sites
© Copyright 1999-2009 LRR Technologies (Hyderabad), Pvt Ltd. All rights reserved. fullhyd, fullhyderabad, Welcome To The Neighbourhood are trademarks of LRR Technologies (Hyderabad) Pvt Ltd. The textual, graphic, audio and audiovisual material in this site is protected by copyright law. You may not copy, distribute, or use this material except as necessary for your personal, non-commercial use. Any trademarks are the properties of their respective owners. More on Hyderabad, India. Jobs in Hyderabad.