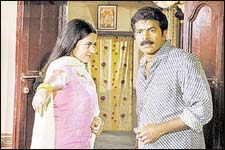 EDITOR RATING
1.0
Performances
Script
Music/Soundtrack
Visuals
NA
NA
NA
NA
Suggestions
Can watch again
NA
Good for kids
NA
Good for dates
NA
Wait for OTT
NA
Some of our readers tell us that we should try to highlight the good things even in lousy movies since so much effort goes into making them. Well, we decided to put that into practice - here are the good things we see in Gana:

1. It ends
2. There's a high probability the director of this one features nowhere in your family tree
3. The theater's so empty, you can do a lot of things you can later proudly claim you once did in a movie hall
4. To make up numbers, probably some of the actors are also around in the theater (and are probably doing the same things, so be careful before meeting them)
5. Within just 48 hours of watching the film, it's possible to recover enough to write a review

Okay, now that our conscience is clear, let us move on with finding the flaws. Gana (Brahmaji) should have died in a poisoning when he was 6 years old, but survives. This is the first mistake the movie makes - there would have been no reason to make this film if the script were written so that Gana died then itself.

Gana grows up as a faithful henchman of his boss Raghunath (Nagababu), the sarpanch of the village. His enemies, led by Telangana Sakuntala, are languishing in jails after the poisoning incident, but are trying to kill Raghunath nevertheless. Their efforts are constantly thwarted by Gana, who can beat them all up faster than he can even count them. It's not that he's fast at beating up - he's slow at counting. Kinda thick up there, you know. That hurts the enemies' motivation too - he's so dumb, he takes a half hour to even realize that he's hurting. Goons thrive on instant gratification, and he thus hits them where it hurts most.

Anyway, Raghunath's daughter Priya (Suhasini), studying in a city, returns to the village, and falls in love with Gana, just because he saves her life by beating up 362 armed goons once. I mean, whatever happened to all the standard female requirements like sense of humor, sensitivity, being a homosexual (or is that metrosexual), clean fingernails, being able to cry and all? She is clearly not reading the right pages of her daily newspaper. There's also a word which starts with "uber" and contains a "cool" in it too, though we can't recollect it now. Obviously she could not either.

Gana falls in love with her, too, but it is not clear to him - he just thinks it is indigestion or something. Just then, however, it transpires that Priya is about to die from a fatal heart condition. Most members of the audience can understand that, since they are feeling like that themselves. How the movie successfully ends from here forms the rest of the story.

Oh well, this film was obviously made to launch Brahmaji as a Srihari type of hero. They just didn't have enough money or time. The plot is confused, slow or absent depending on your preference, and there are exactly 3 faces you can recognize. Brahmaji has potential - or rather, he had potential before this film. After this, everyone will remember this everytime they see him, or even hear him. The performances are all fine, though.

If you like the music or the visuals, don't tell anyone. And if you have decided to watch this movie anyway, just call the producers - they'll perhaps arrange a personal screening at home for the same premium that EasyMovies charges.
Share. Save. Connect.
Tweet
GANA SNAPSHOT

ADVERTISEMENT
This page was tagged for
Gana telugu movie
Gana reviews
release date
Brahmaji, Nagababu
theatres list
Follow @fullhyderabad
Follow fullhyd.com on
About Hyderabad
The Hyderabad Community
Improve fullhyd.com
More
Our Other Local Guides
Our other sites
© Copyright 1999-2009 LRR Technologies (Hyderabad), Pvt Ltd. All rights reserved. fullhyd, fullhyderabad, Welcome To The Neighbourhood are trademarks of LRR Technologies (Hyderabad) Pvt Ltd. The textual, graphic, audio and audiovisual material in this site is protected by copyright law. You may not copy, distribute, or use this material except as necessary for your personal, non-commercial use. Any trademarks are the properties of their respective owners. More on Hyderabad, India. Jobs in Hyderabad.