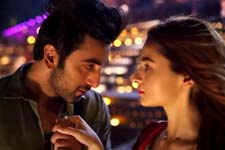 Punarvasu Pendse / fullhyd.com
EDITOR RATING
6.0
Performances
Script
Music/Soundtrack
Visuals
6.0
5.0
6.0
8.0
Suggestions
Can watch again
No
Good for kids
Yes
Good for dates
Yes
Wait for OTT
No
Brahmastra, and the Astraverse it belongs to, are the brainchild of director Ayan Mukherji, who claims to have dedicated over ten years of his life to it. The concept was born out of his love for mythology, even before he began working on Yeh Jawaani Hai Deewani in 2013 - but it took him more than a decade to realise his grand ambition on the big screen.

There is an unsaid expectation from both the film's makers as well as its fans for the franchise to become the Indian equivalent of the MCU - longform storytelling spanning several years and several movies, with an established central story linking them all. And we get it - Brahmastra is the kind of spectacle that has been hitherto unseen in Bollywood, and the most expensive Hindi film ever made.

Brahmastra is the story of Shiva (Ranbir Kapoor), a DJ who has a strange connection with fire. Chance encounters with Isha (Alia Bhatt), whose family organises the festival Shiva is a part of, lead to attraction between the duo, until their lives are turned upside down when Shiva becomes embroiled in a conflict that is much larger than anything he could have envisaged.

Secrets get revealed, familial connections get made, and Shiva gets introduced to the Astras - powerful artifacts protected by a special group of people over the ages. The fate of the Brahmastra, a weapon capable of destroying everything, hangs in the balance - and it is upto Shiva and Isha to make sure it doesn't fall into the wrong hands.

We walked into the theatre with a healthy level of tempered expectations, and that proved really helpful when the film began with a generous dose of exposition via a voiceover narrative complete with illustrations. Ironically, the film started peaking right afterwards with a fantastic cameo appearance really setting the bar high - but one that the film struggled to match afterwards. Brahmastra is a hectic movie, and has a lot to explain, which it does with liberal amounts of exposition - which in turn creates the problem of having far too much telling, and not enough showing.

The real villains in Brahmastra, however, are its weak characters and their even weaker dialogues. When you have people like Ranbir Kapoor, Alia Bhatt, Amitabh Bachchan, Nagarjuna Akkineni and Mouni Roy at your disposal, not to mention a plethora of cameos from veteran actors and introductions of promising new faces alike, it is unforgivable to saddle them with mediocre dialogue writing. A friend who accompanied yours truly remarked about one line ("Isha main aag se jalta nahi, aag mujhe jalati nahi"): "This reminds me of writing B. Com. exams, repeating things in both active and passive voices to bring up the word count."

Despite everything, though, Brahmastra manages to be entertaining despite its 160-minute running time (okay, maybe that is being too generous, it could have been at least 30 minutes shorter). The sheer scope of the film, and its usage of mythological symbolism, give it a unique Indian flavour - of course, if Hindu mythology is the only one we're speaking about. No expense has been spared - it features superstars from Bollywood and South India, it has special effects that have been touted to be at par with those in Western movies, it boasts of a five-man cinematography team to ensure every single frame is perfect, and it aims to combine modern superhero fiction with ancient mysticism while adding a distinct desi feel to it to create a product suitable for pretty much everyone in this country (and outside!).

Ranbir Kapoor and Alia Bhatt have an easy chemistry they bring to the table from their real-life relationship, and that coupled with the fact that they're always in the frame makes for very comfortable watching. We just wish Alia had a meatier role than being the enabler for Ranbir's character. Amitabh Bachchan plays the mentor role he has played countless times earlier, and does it effortlessly. Nagarjuna Akkineni has a small but pivotal role, and is great despite the seemingly reluctant dialogue delivery in Hindi.

But while everyone mentioned above has to deal with stiff characters and poor dialogues, nobody suffers worse than Mouni Roy. Roy's character is the primary antagonist, but we struggle to understand the character's motivations, and the horrible dialogues she has to spout make it an entirely unremarkable villain performance.

Pritam's songs are more hit than miss, with some numbers including Kesariya already being chart-toppers. Simon Franglen's score is interesting, but gets repetitive soon. More than the quality of the sound, it is the incredibly loud volume of everything that stands out, and not in a good way - our ears were ringing by the time we left.

Watch Brahmastra for its grand ambition, its fantastic visuals and its top-notch cinematography, along with the immense care that has gone into making the film. For all its faults, this one shows promise - and we look forward (with some hesitation, admittedly) to Part Two.
Share. Save. Connect.
Tweet
BRAHMASTRA: PART ONE -... SNAPSHOT
BRAHMASTRA: PART ONE - SHIVA SNAPSHOT 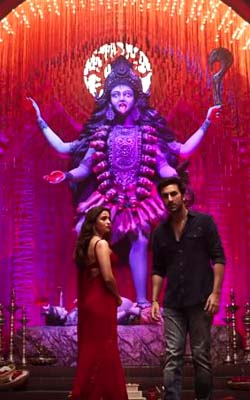 ADVERTISEMENT
This page was tagged for
Brahmastra: Part One - Shiva hindi movie
Brahmastra: Part One - Shiva reviews
release date
Ranbir Kapoor, Alia Bhatt
theatres list
Follow @fullhyderabad
Follow fullhyd.com on
About Hyderabad
The Hyderabad Community
Improve fullhyd.com
More
Our Other Local Guides
Our other sites
© Copyright 1999-2009 LRR Technologies (Hyderabad), Pvt Ltd. All rights reserved. fullhyd, fullhyderabad, Welcome To The Neighbourhood are trademarks of LRR Technologies (Hyderabad) Pvt Ltd. The textual, graphic, audio and audiovisual material in this site is protected by copyright law. You may not copy, distribute, or use this material except as necessary for your personal, non-commercial use. Any trademarks are the properties of their respective owners. More on Hyderabad, India. Jobs in Hyderabad.