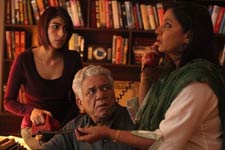 Nupur Barua / fullhyd.com
EDITOR RATING
7.0
Performances
Script
Music/Soundtrack
Visuals
8.0
7.0
8.0
7.0
Suggestions
Can watch again
Yes
Good for kids
No
Good for dates
Yes
Wait to rent it
No
The tone of The Reluctant Fundamentalist, the book, is such that retaining it for a film is near impossible. For those who are fans of the book, prepare to be disappointed if you are a stickler for such details. Mohsin Hamid apparently wrote the screen story, so much of the original flavour is retained, but given time constraints, plot points are placed more according to convenience than literature.

The premise is the same. A young Pakistani man named Changez (Riz Ahmed) sits in a tea shop and recalls his time in the United States of America. Unlike the book, where the other person is an unidentified American, the person listening to Changez is an American journalist named Bobby (Liv Schreiber). Changez is at present a lecturer in the Lahore University, and one of his senior colleagues, an American citizen (Gary Richardson), has been kidnapped by terrorists.

Bobby wants to find out if Changez knows the whereabouts of the missing professor. Changez, however, wants to begin at the beginning. A decade ago, he (Changez) was a promising financial analyst with reputed company Underwood Samson. Fresh out of Princeton, Changez thinks he has arrived, and the future looks bright.

He meets Erica (Kate Hudson), a photographer, in New York. He is smitten by her almost immediately, but she is still getting over the death of her first boyfriend Chris. Changez is hopeful, however, that their love will overcome all odds.

It is while he is on a company trip to Philippines that the World Trade Centre in New York is blown up. Changez does not realise the implications that this incident will have on his personal space and life, as well as his career. Back in the present, there is unrest on the streets of Lahore as student unions protest against the treatment meted out to them in their own country, following the abduction of the professor.

The script, shuttling between the past and the present, is effective as a narration. The writers have simplified the novel, and also taken creative liberties with characters and their fates. Erica, for example, does not disappear like she does in the book. Bobby, of course, is not the unidentified, shady character that the book describes. Changez himself is not the ambiguous, confused youth from the book, but a self-assured young man, with righteous indignation and sudden sense of patriotism.

Locations have been changed, too, and the visuals of Istanbul (and not Chile) contribute to the indecisive restlessness that the protagonist experiences with regard to the way his life is headed.

The dialogues are not too philosophical either, although there is enough shair-o-shairi to keep the intellectual viewer satisfied. Humour and wit are liberally incorporated in the screenplay.

Changez's relationships with parents, relatives, colleagues and girlfriend are believable, but his last scene with Erica borders on the surreal.

In an unintentionally emotional sequence, Changez asks his students what the Pakistani Dream is, and there is no answer. The movie makes a statement on the frustration of the average, urban, educated citizen of a developing nation, when his/her country becomes a pawn in the hands of those in power. The protagonist's transition from the wannabe Pakistani-American to the patriotic Muslim Pakistani could have been more profound, though.

Riz Ahmed is easily the star of the movie, despite the presence of some of Hollywood's best actors. He falters as a local Lahore boy, especially when his diction is so distinctly Westernised, but he manages to rope you into his life and emotions with natural ease.

Kate Hudson looks puffy and not so interested, and ditto for Liv Schreiber. Kiefer Sutherland is sincere as Changez's boss, and becomes the only other character whose pathos and disappointment you feel as his vicarious ambitions for his prodigy crumbles.

Om Puri and Shabana Azmi are more like supporting actors in the movie. They play the parents of Changez Khan, and both manage, effortlessly, to bring in the self-indulgence exhibited by aristocratic families with no money to retain the royal lifestyle of the past.

Michael Carlin's transformation of Old Delhi into Lahore is so authentic that you can easily overlook some of the little errors like the make of the cars on the streets. Arjun Bhasin has done a commendable job with the costume design, but Kate Hudson needed some more attention. Notably, he has adapted the Mira Nair look for Shabana Azmi.

The cinematography by Declan Quinn is eye-catching, especially because of the distinctive colour tones he uses to distinguish between the two countries. There is one very unique top angle of New York, with Central Park as the focus, that will linger in your mind for a while. Editing is crisp.

The music, by Michael Andrews, is the highlight of the film. The opening credit song, "Kangna", performed on camera by Fareed Ayaz and Abu Muhammad is a classic.

The story of The Reluctant Fundamentalist may be set in Pakistan, but it could have been India, or any other Asian country. It has a strong social message, and Mira Nair very clearly does not get into issues of religion or caste. A must-watch for those deprived of food for thought.
Share. Save. Connect.
Tweet
THE RELUCTANT FUNDAMENTALIST SNAPSHOT 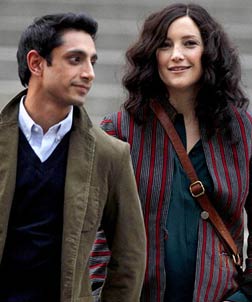 ADVERTISEMENT
This page was tagged for
The Reluctant Fundamentalist english movie
The Reluctant Fundamentalist reviews
release date
Riz Ahmed, Kate Hudson
theatres list
Follow @fullhyderabad
Follow fullhyd.com on
About Hyderabad
The Hyderabad Community
Improve fullhyd.com
More
Our Other Local Guides
Our other sites
© Copyright 1999-2009 LRR Technologies (Hyderabad), Pvt Ltd. All rights reserved. fullhyd, fullhyderabad, Welcome To The Neighbourhood are trademarks of LRR Technologies (Hyderabad) Pvt Ltd. The textual, graphic, audio and audiovisual material in this site is protected by copyright law. You may not copy, distribute, or use this material except as necessary for your personal, non-commercial use. Any trademarks are the properties of their respective owners. More on Hyderabad, India. Jobs in Hyderabad.