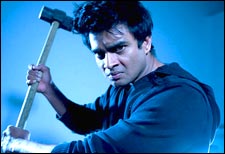 Priyanka Pulla / fullhyd.com
EDITOR RATING
3.5
Performances
Script
Music/Soundtrack
Visuals
4.0
4.5
4.0
4.0
Suggestions
Can watch again
No
Good for kids
No
Good for dates
No
Wait to rent it
Yes
To find oneself caught in a dim-witted saas-bahu soap is bone-chilling enough a premise for a Hindi horror film. Imagine Tulsi, Baa, the bejewelled daughters-in-law, the incurably obedient sons, and their saccharine cherubs coming alive and dragging you into the depths of their horrifically cheesy existences. Director Vikram Chandra was right if he thought K-soap characters crawling out of a TV set could scare the bejeezus out of most Indians better than The Ring's Samara. Full marks in Round 1!

13B is about ghosts possessing a television, specifically a soap opera, and communicating to a human family through it. Manohar (Madhavan), his wife Priya (Neetu Chandra), his mom (Poonam Dhillon) and his brother's family move into a new apartment, the home-loan for which they are going to be paying off for approximately the rest of their lives. The warm new home, obviously, is being co-habited by ghosts, and they make their presence felt in various unkind ways.

While 13B it is not brilliant or original fare, what makes it passable is that it doesn't try to be one. Like the Evil Dead series, it becomes aware at some point that it cannot ever hope to be truly horrific, and starts cracking away itty-bitty jokes at itself in a nice, un-selfconscious way. Nobody can miss the rather disarming halfway admission that a ghost in a family soap is actually a bit of a joke.

Once Manohar discovers how strategic the melodrama is to their lives, he starts calling his wife from work every day, wanting to know what happens next. Priya is thrilled with her husband sharing her most exhilarating avocation. The sneering husband is thus conquered by the gharelu past-time. So much for ghosts and their unintended consequences.

The net result of this batty plot is that 13B is less scary and more (intentionally) funny. The story just about hangs together and isn't entirely suspenseful. Even if you don't know whodunnit for sure, you aren't exactly surprised when the truth is out. It is pretty much a multiple choice that gets narrower as the movie develops.

Of course, the Goofs page on IMDB would run into hundreds of points. The absurdities in the movie keep up with the tradition of the Ramsay brothers. For example, Manohar is the only guy in the family who gets that the TV soap is relevant to their lives, even if that is a screaming conclusion for anyone to draw. The three women who watch Sab Khairiyat, the melodrama that crystal balls the future into their drawing room, are somehow immunised to this realization. Then again, a loss of reasoning capacity is not too uncommon an outcome of watching too many soaps.

In between all this, is a funny blind man with a black dog who comes and goes on random cues. At one point he spooks the pants off Manohar by dropping his sunglasses. Underneath are the pinpoint pupils of an opium addict. Okay. And?

Anyway, funny blind man is mostly dispensable to the plot. His dog, however, is the regulation ominous-signal detecting animal that horror movies are obliged to feature. As a decoy, though, FMB fails miserably.

All in all, 13B has a disconnected, unfocussed feel, and ends up a cross between a soap, horror and a low budget tele-shopping advertisement. Madhavan is cute at best, but the role is hardly demanding. Neetu Chandra could be anyone else, and it would make no difference to the movie. Ditto for Poonam Dhillon. Ditto for the ghosts. Really more Bah than Boo. Or should we say Baa?
Share. Save. Connect.
Tweet
13 B SNAPSHOT


Pros: Madhavan
Cons: Plot is kind of hard to digest

ADVERTISEMENT
This page was tagged for
13 b hindi movie age rating
13 B hindi movie
13 B reviews
release date
Madhavan, Neetu Chandra
Follow @fullhyderabad
Follow fullhyd.com on
About Hyderabad
The Hyderabad Community
Improve fullhyd.com
More
Our Other Local Guides
Our other sites
© Copyright 1999-2009 LRR Technologies (Hyderabad), Pvt Ltd. All rights reserved. fullhyd, fullhyderabad, Welcome To The Neighbourhood are trademarks of LRR Technologies (Hyderabad) Pvt Ltd. The textual, graphic, audio and audiovisual material in this site is protected by copyright law. You may not copy, distribute, or use this material except as necessary for your personal, non-commercial use. Any trademarks are the properties of their respective owners. More on Hyderabad, India. Jobs in Hyderabad.