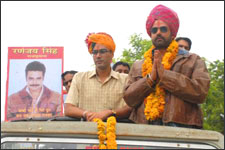 Deepa Garimella / fullhyd.com
EDITOR RATING
5.0
Performances
Script
Music/Soundtrack
Visuals
6.0
5.0
5.5
6.5
Suggestions
Can watch again
No
Good for kids
No
Good for dates
No
Wait for OTT
Yes
Anurag Kashyap's Gulaal is a hard-hitting, realistic look at campus politics and associated topics, like male aggression and the hunger for power.

Gulaal is set in a university in Rajasthan, where students could be stripped naked, beaten up and brainwashed with their heads down a toilet. Into this nightmarish environment enters the lily-livered bespectacled Dileep Singh (Raj Singh Chaudhary), a law student. He moves in with the dashing and daring Ransa (Abhimanyu Singh), the rebel son of a royal family.

Ransa catches the eye of Duki Bana (Kay Kay Menon), a local politician, who fields Ransa in the university elections so that he can realize his ulterior political motives. Things take an ugly turn, however. The rival candidate is Kiran (Ayesha Mohan), an illegitimate daughter of Ransa's father, whose brother kills Ransa, resulting in a reluctant Dileep being forced to contest the elections. Duki Bana rigs the vote count, and Dileep becomes General Secretary.

Power changes Dileep in many ways - he falls in love with Kiran, works lesser and lesser in the office, gets slapped by Duki Bana for disrespecting him, and chucks his blinkers for a pair of contact lenses. After several distressing incidents, Kiran succeeds in getting what she wanted - the General Secretary's chair.

Now, Dileep has several questions. What is Duki Bana doing with all the sponsorship money? Is Duki Bana sleeping with Kiran now? Why are people telling him that Kiran is a dangerous woman after so much she's done for him? Is it time for Dileep to start using another expression? The proceedings get more and more sombre and red-coloured as the finale approaches.

Gulaal is very cryptic most of the time. It sure is interesting to see where the story is going, and, more importantly, how the director is telling his story. There is dry humour, Kay Kay Menon's passion, and the whole realism bit - all factors that keep you hooked. However, in some places, Gulaal feels merely like a collage of various incidents - you want to enjoy the film, you put it together.

The political restlessness is also dealt with by using stupefying symbols like Duki Bana's elder brother (Piyush Mishra), an eccentric doubling up as a helpless moral commentator. And it isn't that the film is dealing with the finer nuances of each character, either - Duki Bana is single-mindedly drunk on his revolutionary ideas, Dileep is unidimensionally spineless, Duki Bana's mistress (played by Mahi Gill) is puzzlingly air-headed, and Kiran and her brother are just plain greedy.

Then, the conversation stoppers - the guns. The film is a string of sequences wherein characters who find it inconvenient to conduct intelligent conversations among themselves shoot away remorselessly, every time leaving the opponent dead. This is not entirely what we go to Hindi movies for.

The only character who is pleasant to have around, and who has a semblance of believable depth, is Ransa. Abhimanyu Singh makes himself instantly likable, but doing away with him so soon into the film is a bad, bad idea.

Kay Kay Menon steals the show with his usual unbelievable talent. Deepak Dobriyal as Bhati, Duki Bana's aide, is also impressive. The rest of the cast are quite forgettable, and not least because their characters were so.

The neon-hued visuals are in line with the intent and feel of the film.The songs have some interesting and satirical lyrics, but aren't anything you'd want to listen to a second time.

In all, this is a good film for those who like to have a good time at the movies by having to work hard at having an okay time.
Share. Save. Connect.
Tweet
GULAAL SNAPSHOT

This is not entirely what we go to Hindi movies for."

The reviewer is assuming a LOT and giving a review. She is deciding on what we go to movies for!!! If that was known, the dudes doing research in Film Studies could abandon their work!

It is sorry to see such statements in fullhyd.

aakash on 16th Mar 2009, 7:59pm | Permalink
its pathetic to see the tone of this review.Its a fantastic movie unparalleled in its execution of a hard hitting realism sprewn contemporary idea.This movie is a saving grace of hindi cinema. There are umpteen metaphors on the various cross-section slices of our own lives. "Hello there" is a bar's title..and in the night when the neon lights malfunction, ..it reads "Hell...here".And thats just one of numerous creative warheads anurag shoots and you instantly surrender lovingly to the artistic explosions saga. Gulaal is a must watch.Be it for its tyranny on showing life exactly as it is sans the icing on the hope-cake, or its relentless pursuit of the story's uncompromisingly random path, or it's acidic taste on relationships,or its wicked marriage of blood with every colour in the rainbow(life), or for its razor sharp depiction of our own glimpses through the screen's mirror

ADVERTISEMENT
This page was tagged for
Gulaal hindi movie
Gulaal reviews
release date
Kay Kay Menon, Mahi Gill
theatres list
Follow @fullhyderabad
Follow fullhyd.com on
About Hyderabad
The Hyderabad Community
Improve fullhyd.com
More
Our Other Local Guides
Our other sites
© Copyright 1999-2009 LRR Technologies (Hyderabad), Pvt Ltd. All rights reserved. fullhyd, fullhyderabad, Welcome To The Neighbourhood are trademarks of LRR Technologies (Hyderabad) Pvt Ltd. The textual, graphic, audio and audiovisual material in this site is protected by copyright law. You may not copy, distribute, or use this material except as necessary for your personal, non-commercial use. Any trademarks are the properties of their respective owners. More on Hyderabad, India. Jobs in Hyderabad.