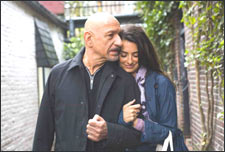 Samrat Sharma / fullhyd.com
EDITOR RATING
7.0
Performances
Script
Music/Soundtrack
Visuals
8.5
7.5
6.0
7.0
Suggestions
Can watch again
Yes
Good for kids
No
Good for dates
Yes
Wait for OTT
No
Philip Roth's searing look into the American morality and psyche in his body of work has usually gotten a raw deal when it comes to cinematic interpretations. Imagine my relief when I saw Elegy then, based on his Novella "The Dying Animal", when not only does it correct past transgressions by being intelligent, it also stands on itself as a well-crafted film.

Elegy takes Roth's brutally honest look into lust and our own mortality, and translates the whole thing without trying to change the tone of the source, or to re-interpret it as a less sexist or an apologetic work of fiction. Isabel Coixet directs the film with a restraint and an honest world view found possible only in the dying breed of American cinema - the indie.

Ben Kingsley plays David Kepesh, a learned and erudite literature professor in his 60s who lives his own debauched yet accomplished life of writing for The New Yorker, writing books, and sleeping with his students. When he meets another one in a long line of such conquests, Consuela (PenÃ©lope Cruz), a student from Cuba, for him she starts off as yet another trophy, another conquest.

Then unexpectedly, he falls in love with her. This would not have been as devastating as it is when the beautiful, shy and intelligent Consuela seems equally besotted with him. He is consumed by the utter insecurities that a man such as him will have, and they come crashing down on his well-constructed psychological walls. While he hides it from another one his ex-students Carolyn (Patricia Clarkson), who is now a regular sex buddy, he does confide in his Pulitzer Prize winner poet friend, George (Dennis Hopper).

Despite George telling him that he needs to "stop worrying about growing old and think about growing up", David is too mired in his own ways of keeping his thoughts to himself, only revealing the made-up suave exterior to completely give in to the relationship. And when he begins to, even a little bit, panic sets in swiftly and brutally. The more the affair intensifies, the more nervous he becomes, leaving him feeling inadequate and deformed, and yet too stubborn to offer Consuela a future, which is what she really wants.

The conflict that he faces this time is as internal as it gets - that of a man completely in love with the control he has had, unable to relinquish it, and at the same time keep it. It's not all about David, though, because if it was, this would be a sexist story that never amounted much else than a character study. What makes this story heartbreaking is Consuela.

The film is male voice dominated: right from David's neurotic narration, to his scholarly friend, to his relationship with his son. Even so, it is Consuela's constant humanity and the masterful work PenÃ©lope Cruz puts in to bring out her vulnerability that makes us starkly judge the veneer that she is surrounded by. The third act is as emotionally charged and complex as the rest of the film, and yet it is satisfying because of her.

Ben Kingsley, of course, is acting masterclass 101 from the moment the camera fades in, but it is Cruz that keep the film humane and a touch relatable. Both are joined by Clarkson and Hopper giving credible and real performances, making this movie an utter pleasure to watch. The film, however, truly belongs to Isabel Coixet, who along with directing also takes camera-operator and music supervisor credits, completely absorbing herself in the filmmaking process, making this a singular vision.

Despite some irregular pacing and at least three very odd music choices, this is a penetrating exploration of love and its opposite - self-worth - and how trust changes everything in between. Not your regular Sunday afternoon fare, but go with a hunger to watch a better film, and you shall be rewarded.
Share. Save. Connect.
Tweet
ELEGY SNAPSHOT

ADVERTISEMENT
This page was tagged for
Elegy english movie
Elegy reviews
release date
Ben Kingsley, Dennis Hopper
theatres list
Follow @fullhyderabad
Follow fullhyd.com on
About Hyderabad
The Hyderabad Community
Improve fullhyd.com
More
Our Other Local Guides
Our other sites
© Copyright 1999-2009 LRR Technologies (Hyderabad), Pvt Ltd. All rights reserved. fullhyd, fullhyderabad, Welcome To The Neighbourhood are trademarks of LRR Technologies (Hyderabad) Pvt Ltd. The textual, graphic, audio and audiovisual material in this site is protected by copyright law. You may not copy, distribute, or use this material except as necessary for your personal, non-commercial use. Any trademarks are the properties of their respective owners. More on Hyderabad, India. Jobs in Hyderabad.