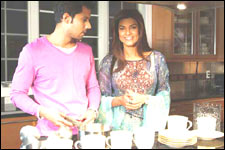 Deepa Garimella / fullhyd.com
EDITOR RATING
2.0
Performances
Script
Music/Soundtrack
Visuals
6.5
2.0
4.0
2.0
Suggestions
Can watch again
No
Good for kids
No
Good for dates
No
Wait to rent it
No
We're not saying it's stupid to throw parties. We're just saying it's stupid to throw one when you have a terribly empty feeling - like when you're struggling to have a baby, or when your publisher husband is struggling to keep his newspaper alive. However, you can make up for it by inviting other people with terribly empty feelings too - in their skulls. And maybe some of them will even buy tickets and watch your party.

So there is this bunch of NRIs. They get together at a party at the house of couple Meera (Sushmita Sen) and Dev (Randeep Hooda). Most of them got there because their cages were left open.

Among them is Meera's sister, Vani (Rati Agnihotri), who is an orthodox woman and who is always fussing over her bespectacled adolescent son, Vikram. Then, there is an MCP who arrives with his wife (the pretty but daft-looking Suchitra Krishnamoorthi) and her bare-backed, handycam-toting Indian-settled sister, Preeti (Deepal Shaw).

Among the various sullen events that occur, Meera busts a business deal that Dev just cracked, because the business partner brings a hooker to the party. Next, Vani urges Meera to be jealous of Dev's secretary, but Meera pooh-poohs her.

Meanwhile, Dev's computer and his camera have caught Vikram's fancy, thanks to the smut on them. He now badly needs a sexual outlet, and kisses Preeti, who helps boost his confidence by pulling down his pants.

Vani walks into the scene, and thinks her son is getting raped. The others try to tell her that "they're just kids", but nothing can change Vani's mood. Then the guests, who now give a whole new meaning to the term 'party-poopers', suggest that there be a game of truth or dare, so that people can make confessions, which will surely un-embarrass Vani.

Everyone agrees that this is the best idea ever, despite no one possessing a license to be that stupid. The party turns positively sour now. This takes care of the last segment of the movie.

Karma Aur Holi is as much fun as a Sunday afternoon spent at the morgue - but without all the emotion. A gathering of neurotics with emotional problems probably sounded like a great concept. However, no one we know wants to watch a loused-up party, even if the execution makes it look dramatic.

Sushmita Sen is the only one who seems to have believed in this film, going by her earnestness. Randeep Hooda is good as the cool, sensitive husband, and Rati Agnihotri is natural until the last few scenes. Naomi Campbell deserves an apology for being cast in a tiny, pointless role. The rest are just about okay.

In all, Karma Aur Holi is about as deep as keyhole, and something we'd not want in the hands of our enemies.
Share. Save. Connect.
Tweet
KARMA AUR HOLI SNAPSHOT

ADVERTISEMENT
This page was tagged for
Karma Aur Holi english movie
Karma Aur Holi reviews
release date
Sushmita Sen, Randeep Hooda
theatres list
Follow @fullhyderabad
Follow fullhyd.com on
About Hyderabad
The Hyderabad Community
Improve fullhyd.com
More
Our Other Local Guides
Our other sites
© Copyright 1999-2009 LRR Technologies (Hyderabad), Pvt Ltd. All rights reserved. fullhyd, fullhyderabad, Welcome To The Neighbourhood are trademarks of LRR Technologies (Hyderabad) Pvt Ltd. The textual, graphic, audio and audiovisual material in this site is protected by copyright law. You may not copy, distribute, or use this material except as necessary for your personal, non-commercial use. Any trademarks are the properties of their respective owners. More on Hyderabad, India. Jobs in Hyderabad.