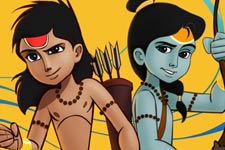 Kritika Deval / fullhyd.com
EDITOR RATING
7.0
Performances
Script
Music/Soundtrack
Visuals
7.0
6.0
7.0
6.0
Suggestions
Can watch again
Yes
Good for kids
Yes
Good for dates
No
Wait for OTT
No
Two of India's ultimate storytellers, Amar Chitra Katha and Cartoon Network, have come together to retell a story for the ages, and we're listening. India is big on mythology as a medium of instruction - not the academic kind but the moral kind. Nearly all of us have grown up listening to stories told by our grand-mothers, the story of Ramayana and the Mahabharata, and all the myriad little stories that happen within these great epics.

Today, when most kids don't live with their grandmothers, and hence don't know much of these tales beyond their bare bones, we turn to cinema and TV to do the job. This has so far been a frustrating effort, to accomplish as well as to behold. Until Sons Of Ram.

Beginning at a time when Lord Rama is struggling with a failing kingdom, while unbeknownst to him his two sons Luv and Kush are growing into strong, intelligent, and troublesome boys, Sons Of Ram tells you the story of Rama post Ravana's execution and Sita's banishment.

Luv and Kush are smart, thoughtful, and strong, but they're boys and, just like all boys that age, draw trouble like magnets draw metal. Their mother Sita is now vanadevi under the aegis of sage Valmiki. The boys have friends who are the most engaging bunch of scams, as well as the most loyal. Soon, all of them have the adventure of a lifetime to contend with, whether or not they're ready.

The best part of this movie is a refreshing lack of eulogizing and preening of the kind that you've seen in nearly all animated epics so far. At the end of it all, it is the quality of being human - powerful, gifted, but human - that stands out the most in all the pivotal characters. Sita is a woman who had to lead a difficult life, but knows she can't take it for much longer. Rama is a great man who's made mistakes, and has to live with them for the rest of his life. All of these are characters that could be you or you or you, but with super-human powers.

Another thing that strikes you is how the scriptwriter decided to forgo awkward references to pop culture in the favor of a contemporization of spirit and emotion. And all of this has been expertly supported by an excellent voice cast. Sunidhi Chauhan's mellifluous voice conveys the nuances of Sita's emotions every bit as well as it twists and turns through unbelievable musical feats.

The animation, while not of the most advanced kind ever, somehow fits, and is definitely pleasing to behold. It is supported by a background score that has been skillfully executed to sinuously meld to the screenplay. The songs, though not the epitome of poetry, are actually quite innovative in the way they are used as a plot device to tell whole chunks of the story, like flashbacks and nostalgic fantasies.

All in all, Sons Of Ram is a surprisingly pleasant and not boring watch. For all the parents who have lost touch with their own childhood stash of folklore and mythology, here's a version that speaks to kids today in their very own language.
Share. Save. Connect.
Tweet
SONS OF RAM SNAPSHOT 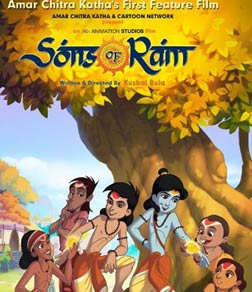 ADVERTISEMENT
This page was tagged for
Sons Of Ram hindi movie
Sons Of Ram reviews
release date
Aditya Kapadia, Sunidhi Chauhan (Animation)
theatres list
Follow @fullhyderabad
Follow fullhyd.com on
About Hyderabad
The Hyderabad Community
Improve fullhyd.com
More
Our Other Local Guides
Our other sites
© Copyright 1999-2009 LRR Technologies (Hyderabad), Pvt Ltd. All rights reserved. fullhyd, fullhyderabad, Welcome To The Neighbourhood are trademarks of LRR Technologies (Hyderabad) Pvt Ltd. The textual, graphic, audio and audiovisual material in this site is protected by copyright law. You may not copy, distribute, or use this material except as necessary for your personal, non-commercial use. Any trademarks are the properties of their respective owners. More on Hyderabad, India. Jobs in Hyderabad.