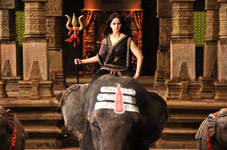 Ravi Kandala / fullhyd.com
EDITOR RATING
4.0
Performances
Script
Music/Soundtrack
Visuals
6.5
4.0
5.0
5.0
Suggestions
Can watch again
No
Good for kids
No
Good for dates
No
Wait for OTT
No
Consider this scenario - an entire kingdom is praying for a male child to be born to the king. A girl is instead born, and the king and the minister decide to conceal this fact from the general populace. They announce that a boy was indeed born, and bring up the child in a forest training camp as a boy for 14 years. Once the prince/princess returns, it does not take long for her to realise that she's a she and not a he.

How momentous should that discovery be? In Rudrama Devi, it is passed off in a jiffy. The princess decides that she will continue acting as a prince until the Kakatiya dynasty's supremacy is established, and that's that.

A few years later, the princess gets "married" to another princess, and a few scenes later the secret is revealed. How momentous should that discovery be? This, too, is passed off with barely any emotion.

A few scenes later, it is announced in the full royal court that the "prince" that the kingdom has revered so far is in fact a princess, and except for people standing up and murmuring agitatedly, the scene barely registers.

And when the princess is to be anointed queen, the general public revolt and say that they do not want a woman as their ruler. The princess remains seated in her throne while the minister speaks for a good five minutes. Even when it is her turn to talk, there is no rousing speech.

You are there sitting for the momentous reveals in all these situations, and you are left cold. You see that the director is concentrating more on his sets and his visualization rather than letting the emotions take over.

That, dear readers, is the tragedy of Rudrama Devi, the latest big budget production from Tollywood.

The film chooses to focus instead on the trivial snippets of the history and brushes away the important parts in a voiceover. And it decides to invest in sets rather than in character-building. Gunasekhar erects four sets - a palace hall, a stadium, a village square and a jungle - and shoots the entire movie in these. He dreams up big war sequences, and uses CGI to show impregnable fortresses with imposing walls, but utterly fails to interest you in the fate of any of the characters. The proceedings feel dragged, and the highs in the narration never come.

Anushka and Allu Arjun put in stellar performances, and keep the film from sinking altogether. Allu Arjun modifies his diction and brings some positive energy to the film's lax proceedings, and injects some humor into the proceedings. Anushka manages yet another difficult role, but there is no denying a sense of déjà vu. Rana speaks like he would in 2015 rather than centuries back - there is absolutely no modulation. His role is not significant, either. The person who speaks the most in the film is actually Prakash Raj. The other seniors do their bit, but the parts are hardly significant.

The music is not upto Ilayaraja standards, and the songs also break the flow - whatever little there flow is in the first place (thank God they decided to cut out the hideous item song with Baba Sehgal and Hamsa Nandini). All the money seems to have been spent on the CGI - like we mentioned there are exactly four sets in which the entire movie is set. And the graphics, in case you've missed the trailers, add seriously to the film's woes.

Rudrama Devi gets an A+ for intent but a B- for execution. As much as we'd have loved to tell you to go watch it and support Gunasekhar's passionate project, we'd be lying if we said you wouldn't be disappointed.
Share. Save. Connect.
Tweet
RUDHRAMADEVI SNAPSHOT 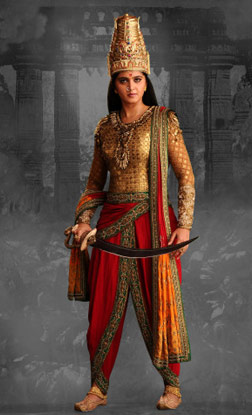 ADVERTISEMENT
This page was tagged for
rudramadevi telugu movie 14
Rudhramadevi telugu movie
Rudhramadevi reviews
release date
Anushka Shetty, Allu Arjun
Follow @fullhyderabad
Follow fullhyd.com on
About Hyderabad
The Hyderabad Community
Improve fullhyd.com
More
Our Other Local Guides
Our other sites
© Copyright 1999-2009 LRR Technologies (Hyderabad), Pvt Ltd. All rights reserved. fullhyd, fullhyderabad, Welcome To The Neighbourhood are trademarks of LRR Technologies (Hyderabad) Pvt Ltd. The textual, graphic, audio and audiovisual material in this site is protected by copyright law. You may not copy, distribute, or use this material except as necessary for your personal, non-commercial use. Any trademarks are the properties of their respective owners. More on Hyderabad, India. Jobs in Hyderabad.