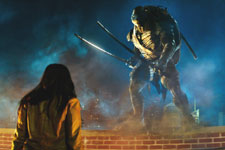 Kritika Deval / fullhyd.com
EDITOR RATING
4.0
Performances
Script
Music/Soundtrack
Visuals
6.0
3.0
5.5
6.0
Suggestions
Can watch again
No
Good for kids
Yes
Good for dates
No
Wait to rent it
Yes
The '80s and the early '90s were so full of utterly insane ideas conceptualized on an improbably large scale - and we loved that these ideas were so insane. We got existential crises alongside massive amounts of destruction. We got alien tree people, bits of swamp that take on human identities, time travel, explorations of consciousness, and so much more - and all of it done with a straight face.

Then came the 21st century, and the same people who gave us all this uncontrolled awesomeness now seem to have collectively assumed that now that we're all grown up, we've probably decided that it's the explosions that kept us hooked rather than absolutely any of that other stuff.

So, in the new millennium, we have Teenage Mutant Ninja Turtles corporatized into submission until that normally unlikely combination of words would seem right at home on a company group-activity T-shirt, but with Michael Bay Michael Bay-ing all over the place to keep us distracted. Because, you know, we have collectively decided to treat cinema like all the stuff we use to stop babies from crying: "Ooh! Shiny!"

All right, basically, this here is a reboot, which means this movie is the dreaded "origin" story. Channel 6 reporter April 'O' Neil (Megan Fox - why?) has been tailing the notorious Foot Clan along with her smitten photographer Vernon Fenwick (Will Arnett), when she finds evidence of strange creatures carrying out vigilante justice in the dark. Turns out it's the Teenage Mutant Ninja Turtles, who are exactly what they sound like - i. e. 4 turtles who have mutated into humanoid forms, have been trained in martial arts by Sensei Splinter (Tony Shalhoub), and are teenagers.

They are also named after Renaissance painters Raphael (Alan Ritchson), Michelangelo (Noel Fisher), Donatello (Jeremy Howard) and Leonardo (Johnny Knoxville), which is a fact that has more to do with April than any of them knows at that point.

It is now up to April and the Turtles to defend the city from the Foot Clan, and find out the Turtles' origins. It is also upto them to keep the Turtles out of the Clan's hands, because nefarious purposes are always under, ahem, Foot.

If the latest part of the Transformers series heralded a horrific future where movies would be nothing more than 2-hour-long billboards that people would pay to watch, TMNT takes that one step further by taking "product placement" to mean "mini-commercial", aka little bits in the film where the story grinds to a halt so the makers can push a product. We would certainly welcome this trend if it meant that, like those poor app developers on the Play market, this ad-mongering makes our content less expensive.

Also, Jonathan Liebesman might be the director, but that only means that you recognize Michael Bay as having something to do with TMNT, but in a more boring way. Basically, you get all the cardboard cutout characters, the uninspired "jokes", the ads, the barely-there plots, and the explosions, but without the overwhelming assault on your senses, which in turn allows you space to think. Never a good idea.

Megan Fox turns one of the most awesome female characters in comic book history into something revoltingly sub-human. The voice cast is all great, but it doesn't matter all that much because they rarely get to say anything worth saying. Whoopi Goldberg is in here for some reason, and so is something that looks vaguely like a Transformer.

The graphics are polished enough, but pretty much constantly underwhelming, as is the soundtrack. All of the semi-human characters are rendered too clumsily to justify the film's budget, as well as the money pouring in through the plot holes cut out to fill with product placement.

In all, Teenage Mutant Ninja Turtles is a shameless attempt at cashing in on our desire to see our favorite childhood stories rendered on film, by a person so clinical about the process that by now he has the formula down: 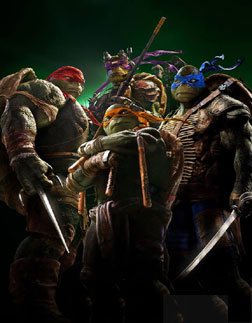