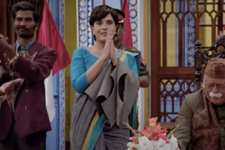 Anil Bandhakavi / fullhyd.com
EDITOR RATING
4.0
Performances
Script
Music/Soundtrack
Visuals
4.0
3.0
4.0
5.0
Suggestions
Can watch again
No
Good for kids
No
Good for dates
No
Wait to rent it
No
The cadence in Madam Chief Minister repetitively reiterates the adage that absolute power corrupts absolutely. The storyline ebbs and flows with the idea that politics is a dirty business in which, upon entry, one invariably becomes dirty in their ways. The story, written and directed by Subhash Kapoor, shows us this complicated world through the journey of a woman who's fighting for power in one of the most ego-driven professions known to man.

The film begins with a Dalit wedding procession being stopped for causing disturbance, as it heads through an area owned by Thakurs. The lead man of the procession pleads for them to be able to peacefully pass by, which has him shot and killed. In the meantime, the same man's wife gives birth to his fourth daughter, who's bemoaned as a curse by the matriarch of the home for being born a girl and also bringing about her father's death.

It is in these circumstances that Tara (Richa Chadha) enters the world. She grows up to be strong and independent, but is once again reminded of a woman's status in India when an affair gone sour leads to her being attacked and assaulted for being pregnant with the man's child. The man is Indramani Tripathi (Akshay Oberoi), who is just making his entry into politics and is advised to carefully handle the potential illegitimate child situation.

Tara is determined to fight, and goes to Master Suraj Bhan (Saurabh Shukhla), a wise and upright leader of a local party that represents the interests of the Dalit people. Master Bhan asserts that he will join Tara's fight only if she's fighting for the people and not for herself. Tara enters the world of politics and quickly rises in the ranks as she becomes a popular figure with the masses.

With the support of Master Bhan, she becomes the lead figure of the party, which is not fully favoured by some of the other members who want the power for themselves. Once in the fray, Tara is faced with political dilemmas that lead her to predicaments which even she might not have foreseen.

Madam Chief Minister fails to impress. The plot is okay but the execution is stale. The film brashly mixes up elements that have been played out many times of late in films and TV series that depict the convoluted world of affairs in rural India - some of which have greatly succeeded for their novelty, screenplay and production. As a result, the twists are clichéd.

Although the movie sets itself up as though it is addressing some heavyweight social issues, it really is just a drama that attempts to entertain by going for a combination of mystery, action and suspense. You would think that a film attempting to show society's attitudes would have more of society in the storyline, instead of just the main characters chasing each other around in scenes required to string a plot together. And the underlying transitions in the story have been carried out just like routine exercises, failing to evoke any excitement.

Saurabh Shukhla shines in spite of all the stated weaknesses. Richa Chadha's performance has its brief moments but is insipid. It is tough to tell whether she is putting on a stoic exterior to portray the personality of her character or whether she is simply failing to add any emotion to Tara's circumstances.

Madam Chief Minister warrants being called a made-for-TV, one-time flick, at best. Unless you're looking to satiate a popcorn craving, or need a place for a quick afternoon nap, a trip to the theatre for this film is overkill. You don't come out of this one experiencing anything new, and that is its biggest weakness in one line. Give it a shot when it's out on one of the OTT platforms, or don't give it a shot at all - you're not missing out.
Share. Save. Connect.
Tweet
MADAM CHIEF MINISTER SNAPSHOT 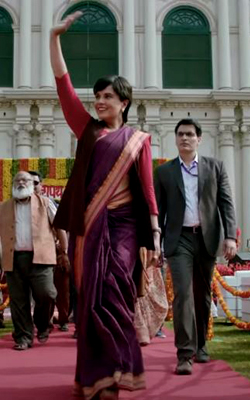 ADVERTISEMENT
This page was tagged for
Madam Chief Minister hindi movie
Madam Chief Minister reviews
release date
Richa Chadha, Manav Kaul
theatres list
Follow @fullhyderabad
Follow fullhyd.com on
About Hyderabad
The Hyderabad Community
Improve fullhyd.com
More
Our Other Local Guides
Our other sites
© Copyright 1999-2009 LRR Technologies (Hyderabad), Pvt Ltd. All rights reserved. fullhyd, fullhyderabad, Welcome To The Neighbourhood are trademarks of LRR Technologies (Hyderabad) Pvt Ltd. The textual, graphic, audio and audiovisual material in this site is protected by copyright law. You may not copy, distribute, or use this material except as necessary for your personal, non-commercial use. Any trademarks are the properties of their respective owners. More on Hyderabad, India. Jobs in Hyderabad.