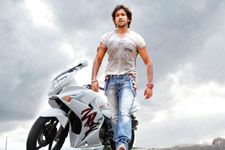 Ravi Kandala / fullhyd.com
EDITOR RATING
5.5
Performances
Script
Music/Soundtrack
Visuals
5.0
3.0
5.0
5.0
Suggestions
Can watch again
No
Good for kids
No
Good for dates
No
Wait for OTT
No
We said this a year ago when Denikaina Ready released and we could say it all over again. The Manchu family is to Tollywood what the Bhatt family is to Bollywood. After seeing Doosukeltha, we can now safely say that they are also completely addicted to recycling. The family recycles actors, locations, plots, directors and everything else that can be recycled in a film, just like the Bhatts do up North.

Doosukeltha, then, stars Manchu Vishnu Babu and is directed by Veeru Potla, who had earlier directed Manchu Manoj Babu in Bindaas. The plot, not surprisingly then, is a mishmash of Vishnu's last hit Denikaina Ready and Manoj's Bindaas. The locations in the film range from the MB Corp office in Madhapur to the Tirupati Railway Station and (yawn) the proprietary Gandharva Mahal set.

The film is produced by Mohan Babu and is presented by Vishnu's daughters - Arianna and Viviana. And lest the sister feels left out, Manchu Lakshmi has a cameo in the film lasting exactly 30 seconds (which the makers claimed was directed by two veterans - Dasari Narayana Rao and Raghavendra Rao). Now can all those who want to still watch the movie raise their hands please!

The plot is about Chinna alias Venkateswara Rao (Vishnu), a street-smart guy (in Telugu movie parlance, street smart = jobless jack). Chinna tries his hand at becoming an investigative reporter and the trail leads to him being hit by a truck and thrown in a field. He wakes up in a hospital and finds that he was brought there by a kind-hearted girl who even gave her gold chain to pay for his fees.

Being the hero, he promptly proceeds to steal the chain from the doctor in the hospital and runs to the girl, Alekhya (Lavanya Tripathi), to return it to her. He also starts stalking her and promises to help her in all her troubles (in spite of the girl insisting that she does not have any problems).

The problems sure come tumbling in, and the girl finds out that her extended family is trying to kill her. How Vishnu enters the family mansion along with the girl, transforms the entire family from cold-blooded murderers to peace-loving people listening to MS Rama Rao's Sundarakanda, and unites the heroine with her family, form the rest of the (extremely predictable) plot.

Doosukeltha is filled with an entire line-up of comedians including Brahmanandam, Raghu Babu, Master Bharat, Ali and Ananth along with several other one-scene characters. Veeru Potla, who showed a modicum of intelligence in scripting Bindaas and Ragada, lets his brain rest this time around and tries to carry the movie through with non-stop comic sequences. Some work, some don't, but you at least will not end up yawning non-stop.

The lead actors perform well enough within their limitations (or like Vishnu says in his intro song, Conditions Apply). Vishnu has worked on his body and his dances and his diction, but the ease is still missing. Lavanya Tripathi mistakes glamour for a caked look and strives to put on more and more in each ensuing scene, almost like she's compensating for wearing minimal make-up in her debut. The other actors all fit their roles.

The music by Mani Sharma has some spark, but is hardly going to be remembered later. The production values are less than lavish, but the director does a good job in utilizing the resources on hand. There are some glaring production errors, though - two women (one of them being the heroine) are prisoners in the villain's house, but roam around wearing the choicest of clothes all the time. The editor could have chopped off a lot more scenes from the movie which would certainly have made it crisper.

Doosukeltha is less than offensive. If you have absolutely nothing better to do, this could prove to be a half-decent way of killing time.
Share. Save. Connect.
Tweet
DOOSUKELTHA SNAPSHOT 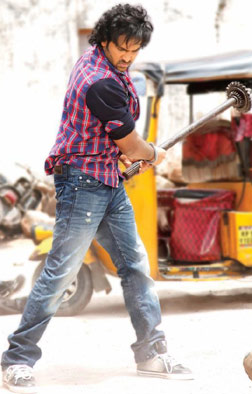 ADVERTISEMENT
This page was tagged for
Doosukeltha telugu movie
Doosukeltha reviews
release date
Vishnu Manchu, Lavanya Tripathi
theatres list
Follow @fullhyderabad
Follow fullhyd.com on
About Hyderabad
The Hyderabad Community
Improve fullhyd.com
More
Our Other Local Guides
Our other sites
© Copyright 1999-2009 LRR Technologies (Hyderabad), Pvt Ltd. All rights reserved. fullhyd, fullhyderabad, Welcome To The Neighbourhood are trademarks of LRR Technologies (Hyderabad) Pvt Ltd. The textual, graphic, audio and audiovisual material in this site is protected by copyright law. You may not copy, distribute, or use this material except as necessary for your personal, non-commercial use. Any trademarks are the properties of their respective owners. More on Hyderabad, India. Jobs in Hyderabad.