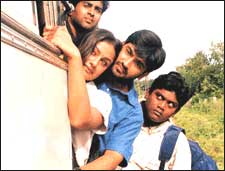 Deepa Menon / fullhyd.com
EDITOR RATING
3.0
Performances
Script
Music/Soundtrack
Visuals
NA
NA
NA
NA
Suggestions
Can watch again
NA
Good for kids
NA
Good for dates
NA
Wait for OTT
NA
Blame it on Bollywood. For happy endings, for heroes who can dance, for the brazen glamorizing of silly love stories. Now, thanks to the happy brigade, we watch movies floating smugly on a cushion of clichés. Every time we sit through an unpleasant scene, we expect to be instantly placated. Surely the hero won't die. Surely he won't let them get away with that. Surely the pace will pick up once the Obstacles To Love show up…won't it? Nope, not with 7/G, a film that laughs in the face of convention. But it laughs alone.

The objective here was undoubtedly to shake you up some, leave you uncomfortable, deny you that airbag of comforting saves. Here's a film with a hero who is hopeless, awkward and downright repulsive at times. A love story that doesn't really get going till way after the intermission. And a plot that states gleefully that basic fact of life - shit happens.

Shit has been happening to Ravi (Ravi Krishna) for many years now. Fortunately he takes everything light. Despite constant thrashings from his father and sundry insults, he goes through life drinking with his hilarious cronies and failing impartially in all his college subjects. But everything changes when Anita (Sonia Agarwal) walks into his neighbourhood and straight into his heart. And the portrayal of this love is just as hammy as that last sentence.

Being a clueless roadside Romeo type, Ravi presses his suit through the routine methods: he engraves her name on his hand, he beats up other boys who look at his "figure", and he slips his hand into her dress. This last transgression just about does it for Anita and she gives him a solid piece of her mind, stressing to him in no uncertain terms that if he were the last cockroach on earth, she'd mate with a guy. Something to that effect.

To be fair to Ravi, he never meant to slip his hand into her dress. All he was trying to do was manhandle her gently in the bus. Is it his fault if the driver stepped on the brakes at that very second? Sadly, Ravi is used to being misunderstood. Now that the heroine hates his guts, we all know what's coming next. But who knew it would take this long?

Stuff happens and happens and, slowly, Anita realizes that Ravi really does love her and that, she, in turn, loves him back. We could have informed her of this and saved everyone a lot of time, but it's all over now. Their friendship is strange, but also kind of sweet, as Anita tries to find that scared little boy inside Ravi and give him the confidence he never had.

Obstacles To Love come in the form of Anita's militant parents and there's the usual slapping around and threatening business. We can't tell you what happens next because it's a big fat surprise. A surprise that is so not worth the wait and the sitting still for two-and-a-half hours, that you won't know whether to laugh or cry. There was a mixed reaction from the audience. Give us candy love stories any day. If we have to die, it might as well be at the hands of a familiar evil. Unpredictable death's the worst.

RATING
10
Raghu on 30th Jun 2007, 11:55pm | Permalink
this reviewer seems to have lost his brain.. We need a change in reviewer. Just writing a few tough words by referring the dic does not make a good reviewer.
RATING
10
Bobby Pearce on 19th Dec 2006, 1:57pm | Permalink
second bad review after kushi.ur rewiews accuracy being lost

RATING
10
Aruna Veeraghanta on 2nd Aug 2006, 2:40am | Permalink
Mr. baji mohan, i totally disagree with yoru view. sorry. this is a true story. as per the version of girl life it did happen in her real life. its wonderful movie.
RATING
10
Baji Mohan on 16th Mar 2006, 12:27pm | Permalink
they say this is a true story...as per the version of girl life i dont think that happens in real life...this is just a movie...but makes you sick with no confidence in life and un-realistic emotions...
RATING
10
Vinay Kumar on 7th Aug 2005, 7:07pm | Permalink
i really appcerate hero and heroine accting
RATING
10
Mohan Rao on 26th Mar 2005, 7:46am | Permalink
This is undoubtedly the most amazing movie I have seen since a long time. The characterization of the boy is absolutely what we expect it to be and nothing less. Any girl would at some point want to turn off the movie and go do something else. That is what the director intended: to make him as repulsive as possible to all the decent souls on the earth. He is downright offensive to the core and you would never want to acquaint with such a guy until you know him how beautiful he can ge at his heart to the ones he loves.

The girl plays a complex role with aplomb. She is made to speak a lot with her expressions which keeps most guys guessing what she is thinking. Especially, when she gives a look to the hero when she is on the scooter and he is in the bus stand. Most of his friends (all guys) would think that she fell for him but a girl would know how she feels even if she did not see the movie to that point.

The movie is aptly named as it reflects the psychology of people growing up in such localities (No offense here, I grew up in such locality as well). Many scenes in the movie rankle my memory in a way that was never done before.

The movie has sufficient twists and turns to make it acceptable to masala movie crowd. The movie sufficiently shows that love inspires, hurts, changes you all around.

RATING
10
Ram Prasad on 24th Mar 2005, 3:02am | Permalink
This is amazing...i never saw a movie more than once but i saw this movie 5 times already...the back ground music, songs and situations are unbelievable, this is best flick for those who hate formula movies..and if u gonna watch it , dont miss the begining...and iam sure u will fall in love with 7G, i appriciate AM Rathnam and especially the director raghava and my special thanks to ravi and Anita (sonia agarwal can be best named as Anita) and all the characters! and man if u have not watched this movie...then certainly u lost something in your era!
RATING
10
Srinu K on 15th Dec 2004, 1:35am | Permalink
This movie is damn good yaar...Never watched any movie like this before. Heroine should get a national award for her acting. I wish i would get a girl friend like her in real life.
RATING
10
LEAVE A COMMENT
fullhyd.com has 700,000+ monthly visits. Tell Hyderabad what you feel about 7 G Brindavan Colony!
MORE MOVIES
Latest Reviews
Don't Worry Darling
Vikram Vedha
Ponniyin Selvan - 1
Naane Varuvean
Nene Vasthunna
more
Krishna Vrinda Vihari
Saakini Daakini
Where the Crawdads Sing
Everything Everywhere All At...
Aa Ammayi Gurinchi Meeku Che...
Brahmastra: Part One - Shiva
Oke Oka Jeevitham
Brahmastra: Part One - Shiva
Ranga Ranga Vaibhavanga
First Day, First Show
Contemporary Reviews
Chingari
Okkade
Premisthe...
Viruddh
Robotrix
more
My Wife's Murder
Parineeta
Sahara (English)
Dosti
War Of The Worlds (English)
Sri Ram
Nazar
Gulabilu
Sahara - Saahasame Vijayam
Random Reviews
Badri
Orey Pandu
Adbhutam
Apocalypto
Transporter 3
more
Atithi Tum Kab Jaoge?
Chalo Dilli
The Hunger Games
Scary Movie 5
Present Love
Roy
Jason Bourne
Murder On The Orient Express
Annabelle Comes Home (Telugu...
My Dear Bootham
SEARCH MOVIES
Dissatisfied with the results? Report a problem or error, or add a listing.
ADVERTISEMENT
SHOUTBOX!
{{todo.name}}
{{todo.date}}
[
ip{{todo.ip}}
]
{{ todo.summary }}... expand »
{{ todo.text }} « collapse
First  |  Prev  |   1   2  3  {{current_page-1}}  {{current_page}}  {{current_page+1}}  {{last_page-2}}  {{last_page-1}}  {{last_page}}   |  Next  |  Last
{{todos[0].name}}

ADVERTISEMENT
This page was tagged for
7G Brindavanam college
7g brindavan colony review
7/g brindawan colony : suicide scene
Brindavan colony Telugu movie
7g brindavan colony telugu rating
Follow @fullhyderabad
Follow fullhyd.com on
About Hyderabad
The Hyderabad Community
Improve fullhyd.com
More
Our Other Local Guides
Our other sites
© Copyright 1999-2009 LRR Technologies (Hyderabad), Pvt Ltd. All rights reserved. fullhyd, fullhyderabad, Welcome To The Neighbourhood are trademarks of LRR Technologies (Hyderabad) Pvt Ltd. The textual, graphic, audio and audiovisual material in this site is protected by copyright law. You may not copy, distribute, or use this material except as necessary for your personal, non-commercial use. Any trademarks are the properties of their respective owners. More on Hyderabad, India. Jobs in Hyderabad.