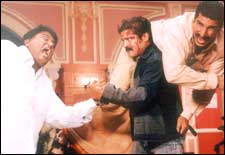 Prasheel Anand / fullhyd.com
EDITOR RATING
5.0
Performances
Script
Music/Soundtrack
Visuals
NA
NA
NA
NA
Suggestions
Can watch again
NA
Good for kids
NA
Good for dates
NA
Wait for OTT
NA
As the title blatantly suggests, Okkade is a one-man show. With “real star” Sri Hari in the lead role, it’s hard to expect anything else. And that's exactly what the crowds are here for, anyway - watch the protagonist smash the thugs around like squash balls, inspire other resupinate cops to be fearless officers, do justice to the femme doodlebugs and seemingly helpless junta, and make scheduled love to his sati-savitri wife. There's a lot more elementary stuff to the movie that I'll conjure up for you.

The region is the faction-smeared Rayalaseema. Raidu (Mukesh Rishi), the monolith behind the topsy-turvy law and order situation in the region, is looking to expand his enterprise, and has just managed to grab the government land alloted to poor, landless farmers. He’s got control over the entire district too, thanks to his elder brother, who is a cabinet minister.

The cops of the region, as expected, are played down with the power brandished by these goons in white. Not that the men in khaki put up a resistance either - they are actually waiting for a 'sincere' officer with ‘nads of steel to come and rescue them from this misery. You know who enters next.

Yugendra (Srihari) is a dutiful cop, and as it goes with all diligent cops, he's subjected to ...thirteen transfers, I guess. He's just nabbed a underworld don, and is basking in the limelight. Once you're in the limelight, it's tough not to catch the attention of “honest” ministers. The stage, therefore, is set. Yugendhra is transferred to the region which makes police officers stain their pants - the dreaded Rayalaseema. But our dude is THE man for the job. So, off he goes with shades to cool his eyes and a wife to heat his sides.

The cops in this region, as I said earlier, are at the receiving end first. A couple of wisecracks, a few blows, heart-wrenching philosophy about what it takes to be a cop, and the Allen Solly shirts worn by our man are just enough for the uniformed elements of the police station to realize their duty. And now it's no more a one-man struggle, it's one army against the other.

It's good to watch this kind of films - you don't have to expect award-winning performances from the cast nor do you have to strain your grey matter to decipher the visuals. This one, too, is simply an outright entertainer. Unfortunately for the viewers, unlike other Srihari flicks that have atleast two well-intentoned item numbers, there are no raunchy songs here (except for one unnecessary number featuring Abhinayasri), and not even any sexually loaded dialogues.

The humor, though, does invoke a smile here and a laugh there. But it's Srihari's lines that can be appreciated. Not because they are innovative or new, but that it'll be pathetic to watch such a huge, ultra-macho cop utter juvenile dialogues.

Towards the end, the cops win the match by eight wickets, with just a head constable and a sub-inspector clean bowled, and the region is now free of land-grabbers and evil-doers.

The director's blending job is really appreciable – he doesn’t beat around the bush, and directly takes the audience to what they were expecting. Well-choreographed action sequences and powerful, ear-bleeding dialogues are what hang in your mind after the film.

On the whole, a movie that can be watched by all Srihari and action movie fans. It’s a must-watch for cops too. With all the philosophy disseminated by the hero, even I wanted to don those khakis. Thankfully, though, I've never been a good listener.
Share. Save. Connect.
Tweet
OKKADE SNAPSHOT

Hey prasheel (Reviewer) read above sentence again... Is there any mistake...??? please keep ur body with you while writing reviews on fullhyd.

ADVERTISEMENT
This page was tagged for
Okkade telugu movie
Okkade reviews
release date
Sri Hari, Santoshini
theatres list
Follow @fullhyderabad
Follow fullhyd.com on
About Hyderabad
The Hyderabad Community
Improve fullhyd.com
More
Our Other Local Guides
Our other sites
© Copyright 1999-2009 LRR Technologies (Hyderabad), Pvt Ltd. All rights reserved. fullhyd, fullhyderabad, Welcome To The Neighbourhood are trademarks of LRR Technologies (Hyderabad) Pvt Ltd. The textual, graphic, audio and audiovisual material in this site is protected by copyright law. You may not copy, distribute, or use this material except as necessary for your personal, non-commercial use. Any trademarks are the properties of their respective owners. More on Hyderabad, India. Jobs in Hyderabad.