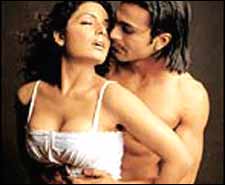 EDITOR RATING
5.0
Performances
Script
Music/Soundtrack
Visuals
NA
NA
NA
NA
Suggestions
Can watch again
NA
Good for kids
NA
Good for dates
NA
Wait to rent it
NA
It took Sony Razdan all of three months to prepare for Nazar - and it shows. The film encompasses a range of emotions including pained grimaces, wooden looks and taxed IQs. After directing a short film on child labor called Girvhi, Sony decided to try her hand at other, smaller labors, like making a half-baked film which tethers on the border of being a horror or a thriller, and falls in neither category.

At best, Nazar is an unhinged and hasty remake of Mahesh Manjrekar's Rakht, which had some solid performances by Sanjay Dutt and Bipasha Basu to add concrete to the realm of ESP and deep mind psychology. Nazar, instead, resorts to cheap gimmicks like creaking doors, eerie soundtracks, the dead coming undead and some power shrieks.

A self-professed deep respect for bar-dancers led the filmmakers into some extensive field research, which however was restricted to visiting the bars. With all the documentation, they managed to inculcate cheapness about the mannerism, clothing and looks of Meera, forgetting that their lead actress, being a pop singer, was at least a notch above the bar dancers.

Nazar is the story is about Divya (Meera) who is a famous singer and has a vision in life. In fact she has several visions. A chance encounter with a dead bar dancer triggers off some lesser-known electrical processes in her brain, leading her to acquire a live-telecast of scenes from the future.

Her doctor, Tarun (Alay Khan), thinks that it is her eyes playing tricks on her - then, that perhaps it is her brain. But the doctor-patient privilege breaks down before he can proceed with other parts of her body - with an abrupt entry by ACP Rohan Sethi (Ashmit Patel). Rohan is a seasoned crime-buster who once lost his wife to his tenacity, while Ashmit is someone who can spend his life walking the ramps. Together, they made a crap of the role. Ashmit has fortunately inherited his sister's looks, if also her asthmatic diction.

The most vocal part, apart from that of the shrieking Meera, is enacted by inspector Sujatha (Koel Puri), who finds solace in harassing Rohan and Divya. She does more damage than even the Pakistani media and Ulema could do, by willing away the controversial kissing scenes - as her raucous banter takes center-stage. Koel appears like a fresh-out-of-college grad, ill-fitting in her cop's boots.

In the meantime, there are a couple of murders more, interspaced by scantily-clad dance numbers which highlight Meera's assets and give a rationale to her being in the profession without knowing her act. The music is all on one note - a loud and disconnected stream of numbers, even if by Anu Malik.

Inspite of the psuedo controversy, or because of it, Nazar is a patched-up affair, taking no steps to resolve the plot, and ends on the tangential plane of psycho-socio-pathological reasoning. With less than average performances by everyone, the movie has missed the bigger vision - that it is all set to spook the audience out of the theater.
Share. Save. Connect.
Tweet
NAZAR SNAPSHOT

ADVERTISEMENT
This page was tagged for
Nazar hindi movie
Nazar reviews
release date
Meera, Ashmit Patel
theatres list
Follow @fullhyderabad
Follow fullhyd.com on
About Hyderabad
The Hyderabad Community
Improve fullhyd.com
More
Our Other Local Guides
Our other sites
© Copyright 1999-2009 LRR Technologies (Hyderabad), Pvt Ltd. All rights reserved. fullhyd, fullhyderabad, Welcome To The Neighbourhood are trademarks of LRR Technologies (Hyderabad) Pvt Ltd. The textual, graphic, audio and audiovisual material in this site is protected by copyright law. You may not copy, distribute, or use this material except as necessary for your personal, non-commercial use. Any trademarks are the properties of their respective owners. More on Hyderabad, India. Jobs in Hyderabad.