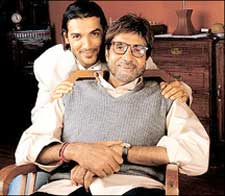 Priyanka Pulla / fullhyd.com
EDITOR RATING
6.0
Performances
Script
Music/Soundtrack
Visuals
NA
NA
NA
NA
Suggestions
Can watch again
NA
Good for kids
NA
Good for dates
NA
Wait for OTT
NA
Finally, after a long time, here comes a genre-defying movie. Not formula, not art, nor the golden mean between the two. Viruddh, instead, is a poetic little movie with a prosodic rhythm and pace. Throughout the unexpected and rather cranky twists in the film, the sonnet-like touch redeems it. A simple story evocatively told, it plays gently on your heart's strings, without once being overbearing - and like a sanitized, children's version of a fairy tale, it underplays the tragedy, while relating the enviably beautiful parts with ease.

Sexagenarian Vidyadhar Patwardhan (Amitabh Bachchan) is a retired ground officer of Air India. He lives with his wife Sumitra (Sharmila Tagore). Their closely bonded family includes their only son Amar (John Abraham) who has to be in London, away from home, to study.

The reflective first half of the movie is narrated in flashback, related by a white-clad John Abraham. The portrayal of the empty nest of a sexagenarian couple, their daily affairs, their mature bonding and their childlike need for each other is smooth and authentic. It is easy to relate to the little squabbles, the moments of re-realized love, and the old age predilection for stability and security.

Sharmila Tagore, as the retired school principal, plays her part with the same ease she displayed in her movies of the yesteryears. And Amitabh Bachchan, while being predictably good, is helped greatly by a smartly scripted role. Technical superiority apart, the movie holds together, gestalt.

Halfway through what is so far a quiet twilight movie, Amar comes home, bringing along his English live-in girlfriend who his parents don't know about. Jenny (Anusha Dandekar) has a rather proppish role to play as a previously roisterous English girl who is cloyingly overeager to become the Indian bahu.

This part, still, is peppered with delicate hilarity. The jokes are extremely laughable at, yet believable and lacking any artistic exaggeration whatsoever. The screenplay seems to have been written at a languid pace, constructing the details with the luxury of a lot of editing. No compromises are made in the story to titivate it or notch up its watchability.

To extrapolate wildly, the movie could have ended right here. A new genre of cinema with real-life reminiscent descriptiveness as its USP. A la a Malgudi days. However, being a theater-goers' film that it is, the next turn it takes is inevitable for the semblance of a script. From here on, the movie gets a tad hammy and affected, the whole pace goes up by a multiple, and the story comes closer to the pop genre.

The personality it tries to take on in this coming half is incompletely delineated, given that only half the film is remaining. So the maudlinness chirrups in and out, and thankfully for the movie, doesn't make an impact.

What happens is this: Amar, who is away with his friends while his family is planning a secret birthday party for him, gets into a fight with Harsh (Amitabh Dayal), a home minister's son, who has murdered a girl in front of everyone. In the fight, the gun accidentally blows off at Amar. Amar is rushed to the hospital, and a shocked and horrified Vidya reaches there when he hears the news.

A particularly heartbreaking scene where a dying Amar stares at his father as he is being operated on, while the white-clad Amar (his soul) speaks on, is a subtle departure from how such pathos is usually depicted. The characters stare on wordlessly while the soul reminisces on about the last time he looked onto his father and waited for a miracle to stop his imminent death. Though this scene is a discontinuity in the feel of the movie, with its raw and bare-boned evocativeness, it does not tear the fabric of the movie.

The rest is about the fight against the system to bring justice for the dead Amar. He is unfairly accused of drug-dealing to extradite his killer from the charges and his wife is taken into custody for questioning.

Vidya's stoic approach to bringing his son justice, and an old couple's vulnerability and strength in sticking up for a son are elements that keep the story going.

The movie ends beyond the flashback point where it starts. Amar looks on contented at a haloed, Jesus-manger-scene like image of his father playing with his grandson, his mother and wife alongside. And disappears for heaven.

The movie might not make gold at the box office, for lack of a conventional sound track (no songs here), a love story or glamorous get-ups, but those who do come will have nothing to crib about. It is an unpretentious movie that makes its mark simply by not infringing upon any other genre. While a little weighty and tiresome at the extreme, it remains composed enough to make a cogent impact.
Share. Save. Connect.
Tweet
VIRUDDH SNAPSHOT

ADVERTISEMENT
This page was tagged for
Viruddh hindi movie
Viruddh reviews
release date
Amitabh Bachchan, Sharmila Tagore
theatres list
Follow @fullhyderabad
Follow fullhyd.com on
About Hyderabad
The Hyderabad Community
Improve fullhyd.com
More
Our Other Local Guides
Our other sites
© Copyright 1999-2009 LRR Technologies (Hyderabad), Pvt Ltd. All rights reserved. fullhyd, fullhyderabad, Welcome To The Neighbourhood are trademarks of LRR Technologies (Hyderabad) Pvt Ltd. The textual, graphic, audio and audiovisual material in this site is protected by copyright law. You may not copy, distribute, or use this material except as necessary for your personal, non-commercial use. Any trademarks are the properties of their respective owners. More on Hyderabad, India. Jobs in Hyderabad.