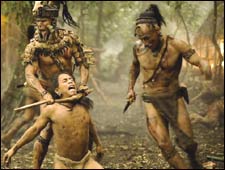 Samrat Sharma / fullhyd.com
EDITOR RATING
6.0
Performances
Script
Music/Soundtrack
Visuals
NA
NA
NA
NA
Suggestions
Can watch again
NA
Good for kids
NA
Good for dates
NA
Wait for OTT
NA
Much has been said of Mel Gibson and his latent craziness over the past year or so. Having watched Apocalypto, the new film by the oft-misguided filmmaker, I can confidently report that he's not gone totally nuts - yet. Instead, if his latest film is anything to judge him by - and it should be, as talented filmmakers leave a little of them in their films always - he is just afraid that you will think he's lost it, and he ends up serving his version of a standard Hollywood action flick.

This is a film that could have been a rumination on a civilization lost, a study of a culture at the peak of its evolution, or stark commentary on the rural versus the urban. It could have been a veiled attack on the US war - and I'm not just saying that, there are so many points in the film where all of this could have been possible - but Gibson chooses to ignore it completely, and gives us Rambo First Blood without the post-war stress and commentary.

The film begins with such promise, really - an ancient culture, its unique people. It's the tiring first half that holds the most promise and under-delivers at almost every score, trying hard but never achieving the somber intelligence it wants to. We meet Jaguar Paw (Rudy Youngblood), and his tribe of hunter-gatherers, living an idyllic life. This is all thrown asunder when another Mayan tribe attacks them and ravages their village. The able-bodied are bundled and taken to the city, where Mayan people revel in their own excesses and chop off heads of sacrificial warriors, lobbing them down a pyramid staircase.

This is where Gibson's pretentiousness falls through. You realize he is not showing you anything about the culture save the things that serve his gory tale - the viciousness of men. This is not the Mayan culture that invented their own mathematics, had a written language or charted stars. They are presented as people who are superstitiously waiting for a sign from the gods to end their plague.

Anyway, in a very literal translation of a prophecy, Jaguar Paw escapes decapitation when an eclipse happens. He makes a break for it and runs to his village. The bad guys are following, the jungle is full of dangers, and Paw must get back to his wife and son in the village. His hunter instincts take over, and he cunningly dispatches of all the villains. Hou! Hou!

That's it really - that's the whole story. Gibson sets you up during the whole film for this one large action set-piece and chase in the jungle. He abandons all seriousness and it becomes a comic book sequence of ultra gore, high adrenaline moments pumping with bravado and guts. This is also what works best in the film. The chase is exhilarating and you can't keep your eyes off the screen during all the action.

Once you realize that Gibson has no interest in presenting anything - subtext, commentary, pathos, character arcs, story - that would help you understand the Mayans better, you feel two things at the same time. One, you feel cheated as this could have been just about any setting. Two, you feel intense relief, as now you can stop worrying and learn to love the bomb. You can now enjoy the over-the-top action and liberal gore in all its resplendent and unabashed glory.

The violence here is excessive, yes, but you don't mind that in the slightest. What you do mind is that the violence is not here to present you a unique viewpoint. The violence is the ends and the means all by itself, and that worries you about Mel Gibson the filmmaker. Having decided that he will march a huge cast of talented first-timers in the middle of a South American jungle, and shoot a film entirely in Yucatec (the ancient Mayan language), he decides he doesn't want to take any more risks and presents a standard template of a jungle brawl, stamped with his own brand of violence.

He mixes his photography with digital and cinematic at times, he goes all out to present you smashed skulls, open arterial wounds, disembowelments and decapitations. He just doesn't give you enough content to chew over, setting the whole film up for a last scene trick that is cunning, but also does a great disservice to the film.

This is far from the masterpiece that people would have you believe. Don't buy into the hype about the film exploring a now-dead culture, and presenting a unique viewpoint. Ignore all the Christ imagery he sneaks in. Sit through the first hour or so, and you can have a lot of fun in the jungle action romp. Word to the wise, though - be prepared for disturbing levels of brutality and sadism.
Share. Save. Connect.
Tweet
APOCALYPTO SNAPSHOT

ADVERTISEMENT
This page was tagged for
Apocalypto full movie
apocalypto video
apolocalypto movie in hindi
apocalypto full movie in telugu
Apocalypto english movie
Follow @fullhyderabad
Follow fullhyd.com on
About Hyderabad
The Hyderabad Community
Improve fullhyd.com
More
Our Other Local Guides
Our other sites
© Copyright 1999-2009 LRR Technologies (Hyderabad), Pvt Ltd. All rights reserved. fullhyd, fullhyderabad, Welcome To The Neighbourhood are trademarks of LRR Technologies (Hyderabad) Pvt Ltd. The textual, graphic, audio and audiovisual material in this site is protected by copyright law. You may not copy, distribute, or use this material except as necessary for your personal, non-commercial use. Any trademarks are the properties of their respective owners. More on Hyderabad, India. Jobs in Hyderabad.