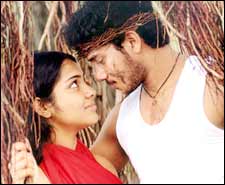 EDITOR RATING
5.0
Performances
Script
Music/Soundtrack
Visuals
NA
NA
NA
NA
Suggestions
Can watch again
NA
Good for kids
NA
Good for dates
NA
Wait for OTT
NA
Premiste is a dubbed version of Kadhal, a supposed Tamil blockbuster. We looked up the definition of blockbuster finally, and it is “an unusually successful hit with widespread popularity and huge sales, especially a movie or play or recording or novel.” You could never be sure, the way most journos use it whenever they cannot think of another adjective.

It’s hard to see a film like Premiste being a blockbuster. It’s nothing to do with the filmmaking itself – this is a Shankar (Aparichitudu, Bharateeyudu, Boys) presentation, and has the stamp all over. It’s the theme itself.

Premiste is the story of a teen couple who run away and get married, with a disastrous outcome. There is an ominous foreboding all through the film, and you are never quite at ease, even in the movie’s lighter moments. It is exactly what you do not go to a film for – to get all wound up and trepid. There is usually a very small segment of audiences who want to see real life inside a movie hall too – these people are the connoisseurs of good cinema, or, to put it less sophisticatedly, the arty crowd. The rest of us want to see the good guys win. There’s a whole world outside to see them lose – you do not have to pay and sit in a theater.

Yes, it’s surprising the masses would go to a film like this in droves to make it a “blockbuster”. What its makers expect of this flick’s one fortnight out at the theaters – yes, that’s all we think it’ll last – is evident in how much of Tamil there is all over the film too; if they expected this to be big, they’d have reshot all that stuff.

Aishwarya (Sandhya) is a 12th standard girl in Madurai, and a run-in with a 2-wheeler mechanic Murali (Bharat) outside her school causes her to fall in love with him. She makes moves on him, and soon they are quite the lovey-dovey couple. And when Aishwarya’s roughneck parents decide to get her married to someone else, they elope and get married.

They are tracked down in just a day, and Murali is brutally beaten up – yes, this is about real life, not what happens in Teja movies. He is spared alive only when Aishwarya promises to give him up and marry someone else. And he is chased out of Madurai.

Two years later, a married Aishwarya spots him as a raving lunatic on the streets of Madurai, and is wildly distraught. Especially since Murali is completely over the deep end and cannot even recognize her. She blames herself for his misery and is inconsolable, and her compassionate husband then adopts Murali, putting him in a mental health institute and taking care of him.

The film is apparently a real story, and director Sakthivel says at the end that a chance encounter with Aishwarya’s husband in a train made him realize that this was a saint of a man, and he decided to make a movie about him. Well and good. Except that, with the possible exception of God, nobody can be unmoved by tragedies like this, and we do not want to know that they happen.

Every one-paragraph report of a suicide in the daily newspaper has a potential movie’s script in it. Every day women and men get hacked in villages over issues of love. 99% of humans are victims of unrequited love. We don’t have to sit in a theater and live these truths.

The film’s first half shows the budding romance, and has very good screenplay and editing, as also some good humor and emoting by the lead couple. Sandhya is brilliant as a teen schoolgirl who is going out to get her guy and who knows how to handle his overtures. Bharat is pretty good too. However, you know right from the beginning that the kids are being hunted, and so you are never at ease all through the film. The second half has the hunt in full swing, and you looking at your watch.

The songs are good, and the visuals what you’d expect in a Shankar film. However, this one is a stressful tear-jerker, and you should watch it only if you enjoy misery.
Share. Save. Connect.
Tweet
PREMISTHE... SNAPSHOT

its a nice movie,when i see premiste movie, the story to good,and AISHWARYA is perfomance is very good,iam really crying when i see the movie,because the real love story the

climax of the film it is great wonderful, i thank to shankar sir,if it possible plz give me sandhya e_mail id or conctact no i tell to her she became big actress wish u all the best of luck u r good perfomance in future

ADVERTISEMENT
This page was tagged for
premisthe inthena movie story
premisthe inthena movie review
Premisthe Inthena dubbed
premisthe inthena telugu movie
premisthe inthena retings
Follow @fullhyderabad
Follow fullhyd.com on
About Hyderabad
The Hyderabad Community
Improve fullhyd.com
More
Our Other Local Guides
Our other sites
© Copyright 1999-2009 LRR Technologies (Hyderabad), Pvt Ltd. All rights reserved. fullhyd, fullhyderabad, Welcome To The Neighbourhood are trademarks of LRR Technologies (Hyderabad) Pvt Ltd. The textual, graphic, audio and audiovisual material in this site is protected by copyright law. You may not copy, distribute, or use this material except as necessary for your personal, non-commercial use. Any trademarks are the properties of their respective owners. More on Hyderabad, India. Jobs in Hyderabad.