Once bitten, twice shy, they say. Obviously whoever coined this brilliant phrase didn't meet us folks at fullhyd.com. We are more the try-and-try-till-you-succeed King Bruce and the spider types. And since we had no intention of playing the long- suffering, if-life-is-a-bowl-of-cherries-what-am-I-doing-with-the-pits Ally McBeal types, we made up our mind that if we have to go through another Uday Kiran starrer, we might as well have fun.

Sriram is essentially a payback-tale minced with brief but hilarious interludes, where wannabe policeman Sriram (Uday Kiran) ravaged by a shady already-policeman Shankar (Ashish Vidhyarthi), decides to get back.

Sriram is an eligible young man aspiring to become a police officer. When I say eligible, I mean that he has in him all the ingredients to become a competent police officer: patriotism, restlessness, combat skills and smoking (oops! okay, we didn't say that!).

Thereon, it's a long entertaining duel between Sriram and Shankar's brain-n-muscle powers. Obviously, the good guy wins and gets the girl (country cow would be a befitting word for Anita), and the bad guy gets dead. The end.

We at fullhyd.com are heartbroken that our favorite tomato-man's post stands vacated! No more a Neanderthal doing the jingalala on the silver screen, it's a 100% new-fangled Uday Kiran introduced in Sriram, grown up from that "me the

caveman... me think you like caveman, too" phase. So if you want to enjoy a little cave play by Uday Kiran, well, this movie's not for you. Uday Kiran must have put in Herculean effort to at least come closer to what we call acting.

Sunil is in his elements in the movie with his customary West Godavari accent. And award winning Ashish Vidhyarthi unquestionably lives up to expectations - he has commendably rendered the negative role as a corrupted police officer. And as far as Anita is concerned, we have one role in mind made just for her - that of a cute-white pregnant Neanderthal cave girl... Jingalalahu Jingalalahu Khurr Khurr! 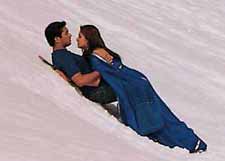 Director Aditya is successful in keeping up constant pace with lots of light suspense, right till the end. As usual there was excellent music from our veteran music director R P Patnaik. The music will grow on you, and is not the instant-ear-candy types.

Sriram will appeal strongly to Uday Kiran's fans, die-hard fans of Sunil and average cine-goers. And perhaps even to die-hard fans of fullhyd.com. Jingalalahu Jingalalahu Khurr Khurr!
Share. Save. Connect.
Tweet
SRI RAM SNAPSHOT
See Sri Ram full details
SRI RAM USER REVIEWS
1 - 11 OF 11 COMMENTS
POSITIVE  |  NEGATIVE |  NEWEST  |  OLDEST  |  MOST HELPFUL  |  LEAST HELPFUL
USER RATING
6.8
16 USERS
Performances
Script
Music/Soundtrack
Visuals
NA
NA
NA
NA
Can watch again - NA
Good for kids - NA
Good for dates - NA
Wait to rent it - NA
hemanth on 7th Apr 2014, 1:24am | Permalink
can anyone plz post the movie download link plzz
RATING
7
Padma on 18th Sep 2002, 6:16am | Permalink
Hi,
I am just another desi in videsh( USA)- who would go to any lengths to feel as close to India as possible- and the best way I do it is watch desi movies.
I simply love all the movies of Uday Kiran- or in other words I am a great admirer of him. He is such a talented actor. Recently I was watching Kalusukovalani and chitram. I could not believe the amount of effort he actually put in to improve his persona. In Chitram he looked like a typical boy in any Indian college, but in Kalusukovalani he really turned into this macho, sexy stud.

And I cant say any less about Sunil. I watch these movies atleast twice a week, and there is'nt a a moment when i did'nt laugh at his jokes( eventhough I know them by heart). He is just too cute and adorable. The chemistry between Uday Kiran and Sunil is just to good to be true. They both have such an amazing star presence that a movie would definitely become a hit if they're starring in it- irrespective of the story. Many people pick on Uday Kiran's voice- but I hear very few actually appreciating his hard work.

It would be a dream come true for me to actually meet them atleast once in my life. Well, it definitely is something to look forward to. :-)))
Jai Hind.
Padma.

ADVERTISEMENT
This page was tagged for
sreeram telugu movie review
Sri Ram Telugu movie download
sreeram (2002 full movie download)
sriram telugu full movie download
Sri Ram Telugu movie
Follow @fullhyderabad
Follow fullhyd.com on
About Hyderabad
The Hyderabad Community
Improve fullhyd.com
More
Our Other Local Guides
Our other sites
© Copyright 1999-2009 LRR Technologies (Hyderabad), Pvt Ltd. All rights reserved. fullhyd, fullhyderabad, Welcome To The Neighbourhood are trademarks of LRR Technologies (Hyderabad) Pvt Ltd. The textual, graphic, audio and audiovisual material in this site is protected by copyright law. You may not copy, distribute, or use this material except as necessary for your personal, non-commercial use. Any trademarks are the properties of their respective owners. More on Hyderabad, India. Jobs in Hyderabad.