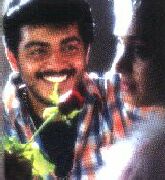 Anon / fullhyd.com
EDITOR RATING
7.0
Performances
Script
Music/Soundtrack
Visuals
NA
NA
NA
NA
Suggestions
Can watch again
NA
Good for kids
NA
Good for dates
NA
Wait for OTT
NA
When you achieve star status, you don't decide your films, your fans do. Irrespective of which hero it is and what sort of an image he has. And Ajit is no exception. Ajit, who has carefully cultivated the image of a dashing, daring and dynamic hero among his fans, pulls off yet another film on the same lines to satiate their hunger.

In the image-building exercise, the director weaves a wafer-thin plot that perfectly fits the bill. Raghuvaran, an inter-State smuggler, who comes to the place of his friend, Police Commissioner Nasser, for dinner, is handed over to the police. Away from his pregnant wife for 20 years, he bides his time in Tihar jail swearing vengeance on Nasser. Out at last, he encounters Ajit, a I'll-do-anything-for-money kind of guy, and ropes him in to love the Commissioner's daughter. The expected happens, there is heartache, and a lot of ill-feelings flow between Raghuvaran and Nasser, and, consequently, between the young lovers. Blah, blah, blah.

Ajit is good as a goon. He seems to have mastered the art of bashing up guys, and his physique and looks suit him perfectly. Shalini, the cynosure of the family, looks good and performs well. For Raghuvaran it is the same old role, while Nasser is a soft Police Commissioner for a change. If you are a diehard fan of the Ajit-Shalini duo, this film is definitely worth it. Even otherwise, college kids out there who want to while away their time away from the maddening world of academia can definitely have a look.
Share. Save. Connect.
Tweet
ADBHUTAM SNAPSHOT

ADVERTISEMENT
This page was tagged for
Adbutham movie imdb rating
adbhutam imdb
adbutham
Adbhutam movie release year wiki
adbhutam telugu movie
Follow @fullhyderabad
Follow fullhyd.com on
About Hyderabad
The Hyderabad Community
Improve fullhyd.com
More
Our Other Local Guides
Our other sites
© Copyright 1999-2009 LRR Technologies (Hyderabad), Pvt Ltd. All rights reserved. fullhyd, fullhyderabad, Welcome To The Neighbourhood are trademarks of LRR Technologies (Hyderabad) Pvt Ltd. The textual, graphic, audio and audiovisual material in this site is protected by copyright law. You may not copy, distribute, or use this material except as necessary for your personal, non-commercial use. Any trademarks are the properties of their respective owners. More on Hyderabad, India. Jobs in Hyderabad.