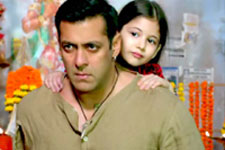 Josh / fullhyd.com
EDITOR RATING
7.0
Performances
Script
Music/Soundtrack
Visuals
7.0
7.0
5.0
7.0
Suggestions
Can watch again
Yes
Good for kids
Yes
Good for dates
Yes
Wait for OTT
No
You know by now. Bajrangi Bhaijaan tells the story of a Pakistani six-year-old called Shaheeda (a brilliant Harshali Malhotra), an angelic imp who may be described as the embodiment of everything that's cute and beautiful. She grows up near silent snow-capped hills under the loving care of her pastoral parents, showering her own love on snow white lambs. There's a problem in paradise, though - the child is mute.

For various reasons, Shaheeda's gutsy mother decides to take her daughter to New Delhi to restore her voice to her. But during the return journey, the little devil lands herself in trouble by alighting the train when mumma's gone to sleep and manages to board another train which promptly drops her off at Kurukshetra in Haryana instead of Lahore in Pakistan as she hoped. It is there that the lost child bumps into Bhai.

Bhai alias Pavan Kumar Chaturvedi alias Bajrangi alias... (you get the drift) is a well-meaning brahmin who's a die-hard devotee of Lord Hanuman. He's a "dull at mind, bull at physique" sort of a guy who is trying to make a living and get hitched to Rasika (a charming and beautifully costumed Kareena Kapoor Khan). He takes pity on the lost mute child and one thing leads to another causing him to vow that he'll return the child to her parents in Pakistan, regardless of any hurdles.

The juicy plot is thanks to V Vijayendra Prasad whose progeny is currently busy making Telugu people across the globe proud with an epic. The potential of this plot is fully realised by a focused, yet commercially viable, screenplay by Kabir Khan (also the director) and Parvez Shaikh. There's a light and convincing romance between Rasika and Bajrangi. There's complete hilarity in the scenes where Bajrangi tries to narrow down where the little kid is from. There's a warm emotionality in the bonding between Munni (as Bajrangi calls her) and Bajrangi. There's a high-voltage Bhai stretch before the intermission, which is completely paisa vasool for the fans and anyone who likes a good hero. And there's a compelling message of love which comes as a part of the story rather than dull preaching.

What makes Bajrangi Bhaijaan important is that very aspect - the expression of a message without suffocating preachiness. Quite a few films have attempted to promote the oneness of humanity and, in particular, Indo-Pakistan friendship. But many of these movies suffer from incompetent filmmaking or become so serious that they forget to entertain. Bajrangi Bhaijaan strikes a balance quite well and speaks to the heart all the while entertaining you in full measure. It also brings a twist on Salman Khan himself.

This is the most unconventional Salman Khan film in a long while. Check out these tropes - the hero is expected to save the day. He does, too. But there's no villain or intricately orchestrated action choreography. What he fights are the hurdles and not people. The hero is very likeable. But he's not the the one-liner cracking impish hunk we're used to. Bajrangi is straight as an arrow, doesn't indulge in sarcasm, and is supremely respectful to practically everyone (there's a lovely moment where his questioning arms express disappointment at a guy who breaks his trust followed by Bhai breaking his bones). He goes shirtless, of course. But he isn't beating anyone up. He's tied up and getting beaten in prison (gasp!).

Kabir Khan gives us a Salman Khan we are not used to, and the best part is Salman Khan acquits himself amazingly well. The man rarely indulges in an actual performance, but he goes all the way in Bajrangi Bhaijaan. It's quite a joy to watch a full-blown star doing a good job at acting, too.

The supporting cast, too, does a great job. Nawazuddin Siddiqui and Om Puri both sail easily through broadly sketched but significant roles. Sharat Saxena flexes wondrous muscles on screen giving Salman Khan a run for his money. The lady playing Shaheeda's mother evokes deep sympathy. Everybody else fits pretty well in their role.

There are the usual quibbles about lack of logic, unimportant role for the heroine (we'd however like to argue that Shaheeda is the lady lead this movie), everything working out a bit too conveniently, utter implausibility of some events and so on and so forth. The film indeed requires a good bit of suspension of disbelief, but you can be charitable, because the final product is pretty good.

Yes, everything about Bajrangi Bhaijaan is pretty good - the cinematography, the editing, the songs, the score et al. However, nothing is superlative. Except, maybe, Salman Khan and the delightful Harshali Malhotra. They give great performances individually, and together concoct a warmth that you have to care about. Kabir Khan ought to take a bow for putting it all together and making it work.
Share. Save. Connect.
Tweet
BAJRANGI BHAIJAAN SNAPSHOT 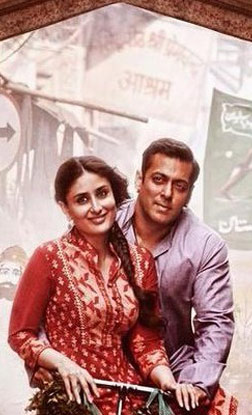 See Bajrangi Bhaijaan full details
BAJRANGI BHAIJAAN USER REVIEWS
1 - 5 OF 5 COMMENTS
POSITIVE  |  NEGATIVE |  NEWEST  |  OLDEST  |  MOST HELPFUL  |  LEAST HELPFUL
USER RATING
6.5
2 USERS
Performances
Script
Music/Soundtrack
Visuals
NA
NA
NA
NA
Can watch again - NA
Good for kids - NA
Good for dates - NA
Wait for OTT - NA
Sai charan on 5th Nov 2015, 3:50pm | Permalink
After watching bajrangi bhaijaan i became the biggest fan of my brother salman khan....at present it is not in theatres as on 5th november but on the occasion of maha shivaratri again fans of brother salman khan are willing to watch this movie in the theatre so my request to my brother salman khan is to again release this movie on maha shivaratri occasion for the sake of his fans for one day..thankyou
Booyakasha on 10th Aug 2015, 6:54am | Permalink
My mother shedding a tear while watching a Sallu flick?...haha...never thought I'd see this day. Nice, clean and entertaining, this one's for the whole family.
RATING
7
test11 on 23rd Jul 2015, 9:46pm | Permalink
Now a days, I have been observing 3Ks are more into making movies on neighboring country. When people in here are not interested not sure what makes them enforce stories, characters and screen play pertaining to them. Im shocked when one of the K whom I had respect for made PK and mocking majorities so hard, that he made a fool of people by masking the actual intention with comedy. I tried watching 'Bharagi Bhaijaan' but after watching the first 20mins till salman enters could see the way Darga was show and again mocking hanuman Idol. Where in the world does some one rallys hanuman IDOL? how often you see people dressed like hanuman. If I want to make a movie on different 'Rel' , I'll get the facts right before being derogatory. I wish they realize the fact and stop promoting 'R' and disrespectful towards other.
test on 23rd Jul 2015, 9:37pm | Permalink
test
Movie Man on 20th Jul 2015, 2:35am | Permalink
Just returned BB. One of the cleanest flicks from Bollywood in a while, and specially the one which has Salman Khan in it. Emotional roller coaster. Makes you wet eyed easily. Clean fun. Goodness portrayed on both sides of the border. Little girl (Harshali Malhotra) acted really well without even saying a word. Salman Khan was really sober and has done well. Pretty much everyone in movie acted well. Though move is 160 minutes, there was hardly a dull moment. Recommended for entire family. Jai Sri Ram :-)
LEAVE A COMMENT
fullhyd.com has 700,000+ monthly visits. Tell Hyderabad what you feel about Bajrangi Bhaijaan!
MORE MOVIES
Latest Reviews
Elvis
Sammathame
Jugjugg Jeeyo
Godse
Nikamma
more
Virata Parvam
Ante Sundaraniki
Janhit Mein Jaari
Jurassic World: Dominion
Jurassic World: Dominion (Te...
Jurassic World: Dominion (Hi...
Vikram
MAJOR
MAJOR (Hindi)
F3: Fun and Frustration
Contemporary Reviews
James Bond (Telugu)
Masaan
Ant-Man (3D)
Ant-Man
Minions (3D)
more
Mantra 2
Mirchilaanti Kurradu
Baahubali
Max
Terminator Genisys
Superstar Kidnap
Second Hand Husband
Guddu Rangeela
Basthi
Random Reviews
Political Rowdy
Police Story 2
Anita And Me
Kuch Naa Kaho
Main Hoon Na
more
Ghost Rider (Hindi)
Woh Lamhe
Takkari
Transformers - Revenge Of Th...
Lafangey Parindey
Friends With Benefits
Dredd (3D)
Luckunnodu
Kaala
Mathu Vadalara
SEARCH MOVIES
Dissatisfied with the results? Report a problem or error, or add a listing.
ADVERTISEMENT
SHOUTBOX!
{{todo.name}}
{{todo.date}}
[
ip{{todo.ip}}
]
{{ todo.summary }}... expand »
{{ todo.text }} « collapse
First  |  Prev  |   1   2  3  {{current_page-1}}  {{current_page}}  {{current_page+1}}  {{last_page-2}}  {{last_page-1}}  {{last_page}}   |  Next  |  Last
{{todos[0].name}}

ADVERTISEMENT
This page was tagged for
Bajrangi Bhaijaan hindi movie
Bajrangi Bhaijaan reviews
release date
Salman Khan, Kareena Kapoor Khan
theatres list
Follow @fullhyderabad
Follow fullhyd.com on
About Hyderabad
The Hyderabad Community
Improve fullhyd.com
More
Our Other Local Guides
Our other sites
© Copyright 1999-2009 LRR Technologies (Hyderabad), Pvt Ltd. All rights reserved. fullhyd, fullhyderabad, Welcome To The Neighbourhood are trademarks of LRR Technologies (Hyderabad) Pvt Ltd. The textual, graphic, audio and audiovisual material in this site is protected by copyright law. You may not copy, distribute, or use this material except as necessary for your personal, non-commercial use. Any trademarks are the properties of their respective owners. More on Hyderabad, India. Jobs in Hyderabad.