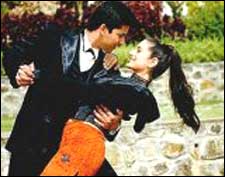 Ghazala Rizvi / fullhyd.com
EDITOR RATING
3.0
Performances
Script
Music/Soundtrack
Visuals
NA
NA
NA
NA
Suggestions
Can watch again
NA
Good for kids
NA
Good for dates
NA
Wait for OTT
NA
Suno Sasurjee was promoted as a comedy that doesn't resort to crude story-telling and inane subplots to get to its point. This is certainly true, as there is no story to get crude about and no point to get at. The movie is non-stop crap, frilled unsuccessfully with Amisha and Aftab.

Aided by some para-psychological phenomenon, and sometimes by absolute illogic, the movie gathers mud as it unscrolls. The story is about a horde of dumb-witted characters playing oaf - there is a faded out Asrani who never got past his yesteryears cracks, and a Kader Khan, appearing almost a relic of his stints with Govinda. Together they make many loud noises and jabber out some bull-talk.

We'll get to the story as soon as we trace it, but for the time being let's talk about more visible things - like Amisha's scantily-clad and shapely legs, and Aftaab's power smile. And we choose to ignore certain facts like Miss Patel still not having learnt to stop appearing asthmatic, and Aftab mastering the art of signing on trash projects.

Here's the story - R K Saxena (Kader Khan) is a greedy banker; he banks on the hope that his ancient creditors will be eager to die, leaving their money unclaimed. When Raj (Aftab Shivdasani) lands at his doorstep to claim his grandfather's savings, Saxena double-crosses him.

From now on, the story goes on a roller-coaster ride - it is all bumpy, patchy and hard to catch upon. Kiran (Amisha Patel) and Raj dance a couple of jigs, Kunika Desai and Shakti Kapoor try to create a diversion, and Kader Khan makes some obnoxious faces. If by now you are thinking that we are surely missing the story, believe us, this is the story.

Bollywood-can't-do-without bravo bad men now make an appearance out of completely thin air. We see Gulshan Grover doing a cameo stint of an extortionist, Shera. After some unnecessary confusion necessarily created to cover the mandatory hours, things get amazingly well-settled. At least for us, who can now finally vent our woes back home.

Suno Sasurjee makes us wonder that they still make films with the perspective that Indian moviegoers haven't evolved beyond the Flintstone era. Are Aftaab and Amisha in such desperate situations financially, or is it only mental deprivation to have done the flick? Was Sanjeev Darshan unpaid, and settled a score with Vimal Kumar, or is he so unmusical compulsorily? And above all, were you in an equally desperate condition to have watched the movie?
Share. Save. Connect.
Tweet
SUNO SASURJEE SNAPSHOT

ADVERTISEMENT
This page was tagged for
Suno sasurjee hindi picture
suno sasurjee Hindi movie
suno sasurjee hindi movie
suno sasurjee movie hindi
Suno Sasurjee hindi movie
Follow @fullhyderabad
Follow fullhyd.com on
About Hyderabad
The Hyderabad Community
Improve fullhyd.com
More
Our Other Local Guides
Our other sites
© Copyright 1999-2009 LRR Technologies (Hyderabad), Pvt Ltd. All rights reserved. fullhyd, fullhyderabad, Welcome To The Neighbourhood are trademarks of LRR Technologies (Hyderabad) Pvt Ltd. The textual, graphic, audio and audiovisual material in this site is protected by copyright law. You may not copy, distribute, or use this material except as necessary for your personal, non-commercial use. Any trademarks are the properties of their respective owners. More on Hyderabad, India. Jobs in Hyderabad.