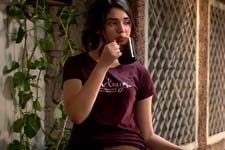 Sai Tulasi Neppali / fullhyd.com
EDITOR RATING
6.5
Performances
Script
Music/Soundtrack
Visuals
6.5
6.5
7.0
7.5
Suggestions
Can watch again
No
Good for kids
No
Good for dates
Yes
Wait for OTT
Yes
Just before the interval, there is a big twist in Aa Ammayi Gurinchi Meeku Cheppali that sharply changes the tone and mood of the movie - turning it from a jog along a beach road to a slow crawl down a dark alley. This is the moment that marks the movie's slide towards mediocrity, where it sadly remains until the end.

Aa Ammayi... starts as a meta-commentary on Telugu cinema. Naveen (Sudheer Babu) is a hotshot Tollywood director with a string of mindless commercial hits with names like "Kasak" and "Missile". His intellectual writer-friend (Rahul Ramakrishna) teases him for being a sellout, but Naveen has no regrets. "Nothing succeeds like success," he says. And now he can finally afford to take risks and tell the stories he truly wants.

That very night, serendipity strikes. He comes into possession of the audition reel of an as-yet-unknown actress. From the very first instant that Naveen sees her on tape, with her longing glances at the camera, he is smitten. He decides that this mystery woman will be his next heroine, and he tracks her down. She is an ophthalmologist named Alekhya (Krithi Shetty), but to Naveen's dismay, she and her parents hate all things cinema. In the pre-interval reveal, we learn about the tragic family incident that led to their aversion. But Naveen's ambition and desire are tangled up in their trauma, and so he helps them realize that the best way out (of their misery) is always through.

Not many writer-directors would venture near stories set within the world of cinema, perhaps out of fear of being self-indulgent. But Mohana Krishna Indraganti returns to this locale for the second time with Aa Ammayi..., after his 2019 film Sammohanam. He shows the film industry as a microcosm of the real world in all its tragedies and comedies - a place not just for pomp and glamour but also jealousy, nepotism and cut-throat competition, a place of doom but also of redemption.

In Aa Ammayi.., we see references to the industry's open secrets like casting couches, and we get a glimpse of the hard choices that filmmakers face. But the more Mohan elevates the role of cinema and acting, the slacker the story gets. "If I kill my dreams, I might as well kill myself," an aspiring actor says, and this dialog sets the sombre tone for the second half of the movie which ends in a treacly ode to the Big Screen and its redemptive powers.

To Mohan's credit, the writing is mature and his characters are fully fleshed. Naveen, for example, is uber successful, but he still has to deal with snooty producers and appease his money-grubbing family. Alekhya's parents show extreme disgust for the sensual aspects of filmmaking, which reminds us of the hypocrisy of most real-world parents who will happily watch a romantic movie but would never allow their daughters to act in one.

The script works best when it leaves things to the imagination. Naveen and Alekhya's romance is sweet and understated, and therefore delightful to watch. It's when the script gets heavy-handed with its themes of trauma and closure, that the movie drags with monotony. You can draw a straight line from the pre-interval twist all the way to the teary climax, and watch with agonizing boredom as the story slowly and surely hits all your predicted beats.

Aa Ammayi... should have been Krithi Shetty's moment to shine, given the considerable screen time she gets. But she seems to equate stiffness with gravitas, and so her Alekhya moves in a deliberate, sterile manner that further dulls the pace of the story. A better actor may have done wonders to the overall vibe of the movie.

Srikanth Iyengar and Kalyani N as Alekhya's stubborn parents are aptly cast. Vennela Kishore and Rahul Ramakrishna as Naveen's film crewmates are such great foils that their presence is sorely missed in the second half. But the brightest spot in the cast is the lead actor Sudheer Babu, who is able to act anywhere on the spectrum from sassy to serious with a natural charisma.

The movie starts off on a quirky note - like a musical. Naveen is at a press meet where the Q&As with journalists take the form of a song introducing him to us. If filmmaker Mohan Indraganti had kept this risk-taking spirit alive till the end, Aa Ammayi... might not have ended up being a slow drama brought down by clichés. 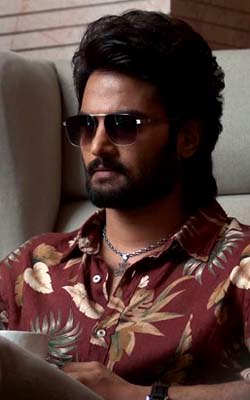 ADVERTISEMENT
This page was tagged for
Aa Ammayi Gurinchi Meeku Cheppali telugu movie
Aa Ammayi Gurinchi Meeku Cheppali reviews
release date
Sudheer Babu, Krithi Shetty
theatres list
Follow @fullhyderabad
Follow fullhyd.com on
About Hyderabad
The Hyderabad Community
Improve fullhyd.com
More
Our Other Local Guides
Our other sites
© Copyright 1999-2009 LRR Technologies (Hyderabad), Pvt Ltd. All rights reserved. fullhyd, fullhyderabad, Welcome To The Neighbourhood are trademarks of LRR Technologies (Hyderabad) Pvt Ltd. The textual, graphic, audio and audiovisual material in this site is protected by copyright law. You may not copy, distribute, or use this material except as necessary for your personal, non-commercial use. Any trademarks are the properties of their respective owners. More on Hyderabad, India. Jobs in Hyderabad.