Everything Everywhere All At Once Review 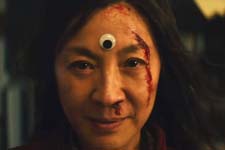 Punarvasu Pendse / fullhyd.com
EDITOR RATING
9.0
Performances
Script
Music/Soundtrack
Visuals
9.0
9.0
9.0
9.0
Suggestions
Can watch again
Yes
Good for kids
No
Good for dates
Yes
Wait for OTT
No
Everything Everywhere All At Once was a recommendation from a lot of my Indie film-watching friends, and some of the content creators I watch, which led to me having a certain expectation - not of the story per se, but of the overall direction I expected the movie to go. And boy, was I wrong! I was not just wrong - I was completely floored for a good ten minutes quite early on in the movie, as it took me to the most ridiculous places on this wild journey. Damn!

The Russo brothers always seem to be wanting in on the action when it comes to multi-universes, having been mainstays in the MCU juggernaut - and they are on board as producers. The power of twos continues, with the "Daniels" - Daniel Kwan and Daniel Scheinert - directing this film. Everything Everywhere All At Once is their second movie after the whimsical 2016 absurdist comedy Swiss Army Man - and the absurdist element carries over with renewed conviction.

Evelyn Wang (Michelle Yeoh) is floundering in life's relentless pursuit. Her husband Waymond Wang (Ke Huy Quan) seems to be distant, and their source of livelihood - a laundromat - is being audited by the IRS with allegations of mismanagement and fraud. Her traditional and demanding father Gong Gong (James Hong) has arrived in Hong Kong placing his health as an additional burden on the already overloaded Evelyn, and her daughter Joy (Stephanie Hsu) wants to invite her girlfriend Becky (Tallie Medel) to their Chinese New Year celebrations right in front of her traditional grandfather.

What begins as a slow march towards impending doom to the auditor's office turns into a complete smorgasbord of adventure as we, the audience, are thrust headfirst into this colourful and animated multiverse where anything can (and will) happen. Evelyn now must escape from the dangerous time-jumping supervillain, Jobu Tupaki, who wants to destroy everything - including Evelyn and her loved ones.

To the average moviegoer, Everything Everywhere All At Once - true to its title - could be overwhelming initially. You get hit with this information overload - from crumbling relationships and impending loss of livelihood turning into slow acceptance of defeat, to a multiverse with infinite possibilities where one can harness the strengths of any alter ego one chooses, to the realisation that everything and nothing matters, to the ultimate realisation that people matter, and emotions matter, and that the destruction of your relationships with your loved ones is metaphorically the end of the world. But at its heart, Everything Everywhere All At Once is a quiet study of humanity, despite the not-quite-so-quiet chaotic entanglements that take place simultaneously.

It is a sensitive portrayal of the modern human tale (with references to Wong Kar-wai), it is an immigrant drama, it is an action-packed adventure with sequences that could rival Tarantino's finest, it is an absurdist madcap comedy that could hang up there with the likes of Rick And Morty (we have a universe where humans are controlled by raccoons à la Ratatouille, alongside a universe where people have hot dogs for fingers, because why not?), and it is also a moving tale of what it means to be family. We implore you to stay in your seat and give this one a fair go, and we promise you will end up being dazzled by the maddening brilliance of this absurdist concoction.

The only (minor) complaint we have with this movie is that it gets too much at points, and some elaborately set-up gags fail to land. This is a film that is not just a yes to the "can watch again" section, we would almost go to the extent of insisting on a second watch. By this point, however, it is just us nitpicking - everything is worthwhile by the end, and the underlying tale is a much simpler one despite all the chaos preceding it.

Michelle Yeoh is amazing, to nobody's surprise - but so is everyone else. It is very cool to see Ke Huy Quan back, after his memorable roles as a child actor - Short Round in Indiana Jones And The Temple of Doom, and Data in The Goonies. For once, we are going to say that the casting is perfect, and stop at it.

American experimental post-rock band Son Lux provides the music for Everything Everywhere All At Once - and in a unique way due to the approach the Daniels made. The band's members - Ryan Lott, Rafiq Bhatia and Ian Chang - were encouraged to individually approach the film's soundtrack, with their solo projects being mentioned during the initial talks. The band members simultaneously worked together and separately on the music, collaborating with several artists of differing styles such as Mitski, David Byrne, André 3000, Randy Newman, Moses Sumney and yMusic; Rob Moose; and the film's actors Stephanie Hsu and Harry Shum Jr. (who plays Chad, a teppanyaki chef). The soundtrack features traditional instruments from several countries, Matrix references and Claude Debussy's Clair de Lune - fitting perfectly into the "everything, everywhere, all at once". 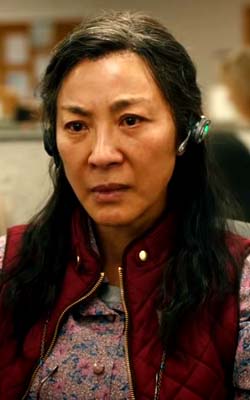 ADVERTISEMENT
This page was tagged for
Everything Everywhere All At Once english movie
Everything Everywhere All At Once reviews
release date
Michelle Yeoh, Stephanie Hsu
theatres list
Follow @fullhyderabad
Follow fullhyd.com on
About Hyderabad
The Hyderabad Community
Improve fullhyd.com
More
Our Other Local Guides
Our other sites
© Copyright 1999-2009 LRR Technologies (Hyderabad), Pvt Ltd. All rights reserved. fullhyd, fullhyderabad, Welcome To The Neighbourhood are trademarks of LRR Technologies (Hyderabad) Pvt Ltd. The textual, graphic, audio and audiovisual material in this site is protected by copyright law. You may not copy, distribute, or use this material except as necessary for your personal, non-commercial use. Any trademarks are the properties of their respective owners. More on Hyderabad, India. Jobs in Hyderabad.