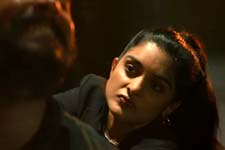 Sai Tulasi Neppali / fullhyd.com
EDITOR RATING
6.0
Performances
Script
Music/Soundtrack
Visuals
6.0
6.5
7.5
7.5
Suggestions
Can watch again
No
Good for kids
No
Good for dates
No
Wait for OTT
Yes
Saakini Daakini is the Telugu remake of a Korean action-comedy Midnight Runners, about two police academy trainees who witness a crime and embark on an amateur investigation to catch the culprits. Unlike the original, Saakini Daakini has an all-female lead cast. With the right pairing and dialog the movie may have set off fireworks, but instead it is a dull affair, with only occasional jolts of energy - not the electrifying girl-power cinema I was hoping for.

Shalini (Nivetha Thomas) and Damini (Regina Cassandra), two police academy students, meet on the first day of training, and immediately get off on the wrong foot. Damini is the rich, haughty, recommendation-quota kid, and Shalini is the uncouth, middle-class Telangana bidda who grew up playing Kabaddi. They are at each other's throats, like the demons Saakini and Daakini of Telugu horror lore. Their rivalry spirals out of control until one day they are threatened with expulsion. Begrudgingly, they become friends. And then when they witness a kidnapping and uncover an organized crime ring, they decide to work together to catch the thugs.

To create a buddy-cop comedy, director Sudheer Varma had a mountain of inspiration to draw from - movies such as "21 Jump Street" or "The Heat" which rode high on the sizzling chemistry between the leads. Channing Tatum and Jonah Hill; Sandra Bullock and Melissa McCarthy - they were like discordant twins, sharing a strong rapport, never missing a beat. But here, Shalini and Damini are mismatched, and not in a good way. Apart from Shalini's love of food and Damini's love of sanitizer spray, there is little to learn about these ladies. We get only a brief look into their ambitions and desires, but not enough to make us care about them or their high-minded rescue efforts.

Rather than create a playful dynamic between Shalini and Damini, Varma makes use of one-off comedy gags to bring in the fun element of the movie. So there are a bunch of pot-bellied clowns for policemen, and absolutely none of them does his actual job. The plot flits between serious and jokey in the blink of an eye with only the background score for you to take your cues from. Scenes that should have been impactful, such as when Shalini carries a hurt Damini on her shoulders and runs to the finish line of a mission, barely leave you roused.

What keep the movie watchable are its exquisitely choreographed fight sequences. Shalini and Damini thwack, punch and out-manoeuvre the bad guys with an intense physicality and vigour that we've not seen heroines in Telugu cinema imbibe till now. The finale face-off is especially satisfying to watch, not least for its exhilarating background music of a remixed "Aiygiri Nandini" stotra.

Saakini Daakini's fate, though, ultimately falls in the hands of its leads, and that is where it fails to impress. Regina and Nivetha lack chemistry, each too caught in her own gig to form a cohesive team. Therefore their bickering roles in the first half of the movie have more kick than their sterile friendship in the second. Nivetha attempts to be spirited, but opposite the staid and awkward Regina, it is like watching slime get thrown against a wall - plop, not pop. A series of cameos by funny men Satya and Prudhvi Raj do little to uplift the script.

In terms of style and story, Saakini Daakini breaks the norm of the typical Telugu action movie - two female leads, no hero. But mere experimentation does not a hit make. Director Varma sits atop a goldmine of potential that may have been fully realized with a few script revisions or a better cast. For now, we can only lament the wow movie this one could have been, instead of the meh movie it is.
Share. Save. Connect.
Tweet
SAAKINI DAAKINI SNAPSHOT 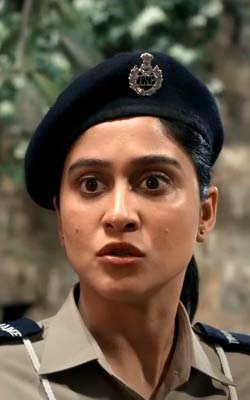 ADVERTISEMENT
This page was tagged for
Saakini Daakini telugu movie
Saakini Daakini reviews
release date
Regina Cassandra, Nivetha Thomas
theatres list
Follow @fullhyderabad
Follow fullhyd.com on
About Hyderabad
The Hyderabad Community
Improve fullhyd.com
More
Our Other Local Guides
Our other sites
© Copyright 1999-2009 LRR Technologies (Hyderabad), Pvt Ltd. All rights reserved. fullhyd, fullhyderabad, Welcome To The Neighbourhood are trademarks of LRR Technologies (Hyderabad) Pvt Ltd. The textual, graphic, audio and audiovisual material in this site is protected by copyright law. You may not copy, distribute, or use this material except as necessary for your personal, non-commercial use. Any trademarks are the properties of their respective owners. More on Hyderabad, India. Jobs in Hyderabad.