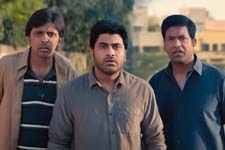 Sai Tulasi Neppali / fullhyd.com
EDITOR RATING
7.5
Performances
Script
Music/Soundtrack
Visuals
7.5
6.5
7.0
7.5
Suggestions
Can watch again
No
Good for kids
Yes
Good for dates
Yes
Wait for OTT
Yes
Best friends Aadhi, Seenu, and Chaitu are stuck in the misery of their own making. Aadhi (Sharwanand) is a musician crippled by stage fear. His biggest confidence-booster, his mother, has been dead for twenty years, but Aadhi has still not moved past the loss, despite the love he receives from his girlfriend (Ritu Varma). Seenu (Vennela Kishore) is a real estate broker with an inferiority complex about his lack of education and poor English-speaking skills. Chaitu (Priyadarshi) can't land himself a girl because of his sky-high expectations. It will take a good wake-up call for these men to revamp their lives. And it arrives in the form of a time machine, and a mad scientist named Paul (Nasser).

Oke Oka Jeevitham - you only live once - seems like a contradictory title for a movie about time travel and second chances. After all, its main characters, literally revisit their past and live in it for an entire month in an attempt to change their trajectories. But as these movies typically go, Aadhi, Seenu, and Chaitu end up right back where they started, their fates unchanged, but their attitudes towards the present completely transformed. In this manner, writer-director Shree Karthick successfully conveys the YOLO message of the movie.

To ponder the movie's logic or structure is to miss its larger goal. How would a lone scientist create a device as complicated as a time machine? And why are his time-travel rules so arbitrary? Such incongruencies snag at the script, but thankfully don't take away from its heart. The time machine is only a convenient storytelling tool to transport these men into their past. And when the adult Adhi, Seenu, and Chaitu use it to go twenty years into the past, to 1998, to try to change their fates, the result is quite magical. While most time travel movies warn against past and present avatars ever meeting each other, in this movie, the confrontation is essential and entertaining.

The film makes a good example of the importance of character development. Seenu and Chaitu may be sidekicks to Adhi's main act, but their personas and goals are just as fleshed out and meaningful. Played by comedy actors Priyadarshi and Vennela Kishore, the funny pair makes the perfect counterweight to Sharwanand's morose and serious Adhi. And they give us many moments of laugh-out-loud fun without ever resorting to buffoonery.

Karthick's screenplay has a strong sense of time and place, which combined with Sujith Sarang's cinematography and Jakes Bejoy's music, creates moments of sublime storytelling. The friends' dingy bachelor-pad dwelling is introduced to us by a cockroach! Like a tour guide, it takes us around the empty beer bottles, the uncovered plates of food, and the dust-laden tchotchkes. There is no mistaking the kind of place it is. Later, when Adhi, Seenu and Chaitu step back into the Hyderabad of the 1990s and breathe in its pollution-free air, you too will feel deep nostalgia for that era.

Crucial moments of the story are supported by neat visual effects. Time-jumping is depicted as akin to standing in the vortex of a mini-hurricane. It's not entirely inventive, but the CGI is at least done tastefully.

After a fast-paced and engrossing first half, the second half gets a bit lost in the weeds of time-travel logic and therefore falters. There are a few too many improbable coincidences involving the scientist and his friend, and an unnecessary car chase scene that ropes in comedian Ali. But in the end, it does come back to its main themes of loss and regret to leave us with a satisfying ending.

Amala Akkineni as Aadhi's mother is absolutely scintillating. Whether she is feeding the street dogs, playing her Veena, comforting her son, or worrying about him, she is the very embodiment of motherhood.

Lead actors Sharwanand and Ritu Varma deliver strong performances but with such impactful acting from Vennela Kishore, Darshi, Amala, and the child actors who play younger versions of the besties, they take a back seat, perhaps rightfully so. The weakest actor and role is that of Nasser as Physicist Paul. He talks in that mystical, threatening whisper of a mad scientist, which is cumbersome to heed.

At first, Oke Oka Jeevitham seems like a mishmash of tropes and coincidences: a time machine to change the past; a wayward musician who finally finds his voice; a mother sentiment angle. But with a well-paced script and carefully crafted characters, it just works - it makes us laugh and cry, and moves us in all the ways good cinema is supposed to.
Share. Save. Connect.
Tweet
OKE OKA JEEVITHAM SNAPSHOT 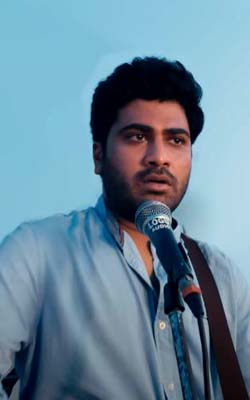 ADVERTISEMENT
This page was tagged for
Oke Oka Jeevitham telugu movie
Oke Oka Jeevitham reviews
release date
Sharwanand, Ritu Varma
theatres list
Follow @fullhyderabad
Follow fullhyd.com on
About Hyderabad
The Hyderabad Community
Improve fullhyd.com
More
Our Other Local Guides
Our other sites
© Copyright 1999-2009 LRR Technologies (Hyderabad), Pvt Ltd. All rights reserved. fullhyd, fullhyderabad, Welcome To The Neighbourhood are trademarks of LRR Technologies (Hyderabad) Pvt Ltd. The textual, graphic, audio and audiovisual material in this site is protected by copyright law. You may not copy, distribute, or use this material except as necessary for your personal, non-commercial use. Any trademarks are the properties of their respective owners. More on Hyderabad, India. Jobs in Hyderabad.