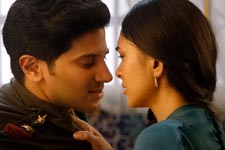 Aditya Devulapally / fullhyd.com
EDITOR RATING
7.5
Performances
Script
Music/Soundtrack
Visuals
7.0
7.0
7.0
8.0
Suggestions
Can watch again
Yes
Good for kids
Yes
Good for dates
Yes
Wait for OTT
No
The epic Ramayana has an interesting ability to find its way into every third Indian film. And whenever I now feel that a new film has symbolism from the epic, I make sure to chant the Hanuman Chalisa 50 times before the film praying that there be at least an iota of novelty in it.

Now, out of all the movies cooked with the Ramayana's symbolisms, Mani Ratnam's adaptations had unique takes. His works like Villain and Cheliyaa, although they didn't fare well at the box office, had a poignant quality to their inspirations. In Mani Ratnam's adaptations, the variations from the epic don't happen in a rush but are told with visual flair and in an unforgettably delicate manner. Does Sita Ramam live up to the same standards?

It's 1984, and Afreen (Rashmika Mandanna) is a fiery Pakistani youth studying in London. She is filled with angst against her neighbouring country and feels Pakistan has been given unfair treatment. To gain her deceased grandfather's property, she is tasked with handing over a letter to a Sita Mahalakshmi (Mrunal Thakur) written by a Lieutenant Ram (Dulquer Salman) 20 years ago. What she discovers in this journey of truth-seeking changes her forever.

Hanu Raghavapudi's Sita Ramam is an adaptation born out of the Mani Ratnam school of cinema. It has a sophisticated love story, nuanced plot twists, a charming hero, a daisy-like mature heroine, the grandeur, the dramatic music, the rich cinematography and the seamless editing. His previous outings like Andala Rakshasi and Padi Padi Leche Manasu had the same cosmetic quality. But where the film turns you off frequently is in the dialogue department.

The dialogues are exposition's exposition. Characters don't just say what they need to, they say what they are thinking, and what they will do, in a poetic rhythm accompanied by a dramatic background score. The film has a lot of such tongue-in-cheek moments. When Vennela Kishore is confronted with Afreen's dilemma that she doesn't even know how Sita looks, he immediately utters, "Oh wait, when Ram was with me there was a camera, the photo he took of Sita might be with me." And he brings a properly decorated, neatly framed album.

Characters suddenly become dumb to spoon-feed audiences with unknown information. As if the entire purpose of their existence until that point was only to tell the story of Sita and Ram. Terrorists are caricatures and Army Officers are more animated than they are in usual Telugu films. Yet, the film comes incredibly close to hitting the target.

The reason? The endless charisma of Dulquer Salman as Ram, and the bright elegance of Mrunal Thakur and the captivating voice of Chinmayi Sriprada combined as Sita. Love happens between the hero and heroine in most of our films merely because they are the main characters. But Sita Ramam takes up the mighty toil of building the story of love. How does love brew between an upright, cheerful soldier in Kashmir and a mysterious woman who expresses her love through correspondence? There is so much sensitivity given to their love story that you can't help but care for their motivations. Ram steals your heart with his sincere yearning for Sita, and Sita wins your empathy with this mysteriously great problem that's keeping her from being one with Ram.

Oftentimes, the elders in any country filled with passions such as India try to convey to the younger lot the sacrifices made for their freedom. Yet, most of such preaching fails to do the job because of the desperate and privileged tone with which the message is told. The theme of Sita Ramam is not peace, being anti-war or political consciousness. It is simply about the sacrifice that lovers like Ram and Sita had to make for the freedom and rights of the likes of Afreen and us. And probably that's why we need to love more today.

At any given period in the rich history of India, love had to suffer at the hands of bigotry, divisions, hate and honour. And today life has changed a lot. Love has evolved a lot. And somewhere thanks go to the likes of Ram and Sita. Yet, the film never delivers this message from a tall moral standpoint - instead, it's warm, subtle and caring, like a friend's advice or a mom's hug. Afreen is never belittled for her angst. Instead, she is treated with respect in every confrontation. How often do we get to see a female protagonist with Pakistani origins in Indian films?

Ramayana is about a million things but the idea of Ram is the most important one. Irrespective of today's social climate and diverse opinions, Ram has always been the patient one. And this film doesn't see him as a macho duty-bound god that the right makes him or the sexist rock that the left interprets him to be. It sees Ram as a mother-like figure. His love is infinite and his forgiveness touches everyone, and when he makes a sacrifice for someone, he doesn't wear it on his sleeve. He doesn't go about demanding attention or applause for his bravery. He will go to great lengths to meet his Sita, and yet wouldn't force her to answer just because he thinks he deserves it.

Meanwhile, Sita isn't purely defined by her love for Ram. Although her character starts like that, we get to know her identity is much more complicated than meets the eye. Her love isn't just endless, it's also in pain. Despite her hurdles, she fights her way to own her love. She chases the guy with the most graciousness you can see on screen. Her courage fills Ram with the energy he needs to go through war. And simultaneously, makes sure, she does justice to her main identity.

Rashmika's Afreen is a portrayal that doesn't start on a great note. It takes the whole movie's duration to hit the right note. Her dubbing feels awkward and her angst feels forced. But as the film grows on you, her character will, too. Afreen is the core of this story, and by the end, you are content with her realisations.

The second most bothersome part of this film is Tharun Bhascker's Balaji. He is supposed to be the Telangana-speaking comic relief in this film, but never does he bring the energy and mischief needed to pull off such a role. There's not a single supposedly funny scene that tickles your bones. Why, is the only word that lingers on your mind. Why not bring someone truly funny and make the comic act work?

Sumanth's Major Vishnu Sharma is a forgettable and anxious act. His act is never stable. He is supposed to be the only human character with tangible flaws. But he never brings in the finesse to pull off such a dimensional character. However, there is an interesting piece of trivia for people who watched Sumanth's movie Yuvakudu that also saw him play an Army man. You'd understand the casting choice because Sumanth's Army officer in Yuvakudu is a fond memory for people born in the late '90s. In addition to him, the rest of the mandatory Telugu artists like Murali Sharma, Vennela Kishore, Prakash Raj, Anish Kuruvilla and Priyadarshi come and go, doing more or less the dramatics. But please, Vennela Kishore stopped being funny like two years ago.

The music by Vishal Chandrashekhar hits the chord in most places, but at times tries too hard to dramatize the scene. The songs have the magical quality to become that low-key favourite album you will share with your loved one a few years later. Gladly, the film doesn't have many lip-sync songs. Characters exist in the poetic space that each track builds, and they never break the story continuum. The cinematography by P S Vinod and Shreyaas Krishna elevates the film to a place even a few European films fail to reach. The icy terrain of Russia is finely blended into your visual syntax without your ever having to suspend disbelief that it's Kashmir.

I had completely low expectations of this film, convinced it was going to be another one of those saagatheesina romantic sagas. Oh boy, how wrong was I. When you sit to review a film, especially one that is evidently author-backed, you are extra careful. You make sure you focus on the silver lining more than the cloud. But I didn't have to apply that effort with Sita Ramam - this film is, hands down, a winner.
Share. Save. Connect.
Tweet
SITA RAMAM (HINDI) SNAPSHOT 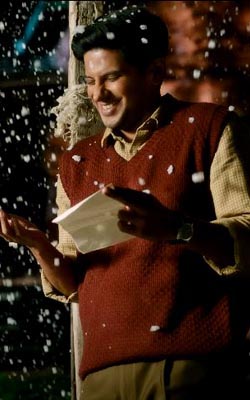 ADVERTISEMENT
This page was tagged for
Sita Ramam (Hindi) hindi movie
Sita Ramam (Hindi) reviews
release date
Dulquer Salmaan, Mrunal Thakur
theatres list
Follow @fullhyderabad
Follow fullhyd.com on
About Hyderabad
The Hyderabad Community
Improve fullhyd.com
More
Our Other Local Guides
Our other sites
© Copyright 1999-2009 LRR Technologies (Hyderabad), Pvt Ltd. All rights reserved. fullhyd, fullhyderabad, Welcome To The Neighbourhood are trademarks of LRR Technologies (Hyderabad) Pvt Ltd. The textual, graphic, audio and audiovisual material in this site is protected by copyright law. You may not copy, distribute, or use this material except as necessary for your personal, non-commercial use. Any trademarks are the properties of their respective owners. More on Hyderabad, India. Jobs in Hyderabad.