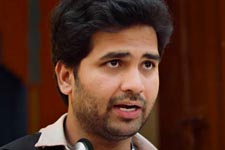 Sai Tulasi Neppali / fullhyd.com
EDITOR RATING
7.5
Performances
Script
Music/Soundtrack
Visuals
6.5
7.5
7.5
6.0
Suggestions
Can watch again
Yes
Good for kids
No
Good for dates
Yes
Wait for OTT
Yes
The barefooted prince of contemporary Telugu comedy, Anudeep K V (he famously doesn't wear shoes in public), is back with another laugh riot. Anudeep's previous movie, Jathi Rathnalu, paved the way for a new kind of comedic storytelling in Tollywood - one that makes heavy use of witty dialogue and screwball situations, rather than slapstick gags, to get us LOL-ing. First Day, First Show, too, has this distinctive brand of humour. Written by Anudeep, and directed by newcomers Vamshidhar Goud and Lakshmi Narayana Puttamchetty, FDFS is a hundred and twenty minutes of pure fun.

It is February 2003 in Narayankhed, Telangana, and a college kid named Seenu (K Srikanth Reddy), a die-hard Pawan Kalyan (PK) fan, moves heaven and earth to procure the "first day, first show" tickets of Khushi for him and his crush, Laya (Sanchitha Bashu). That's it. That's the entirety of the movie's premise. Seenu lands himself in absurd situations - a caper involving a dead body, a stint in jail, and an encounter with a faltu don called Ravanna (Vennela Kishore) - to get his hands on those coveted pink slips of paper.

Not everyone understands Seenu's mad pursuit. His own father (played by Tanikella Bharani) thinks it's a massive waste of time and energy. But for Seenu and other ardent fans of the FDFS cult, it is life and death. Their entire identity is crafted around their heroes. Seenu styles his hair like PK, carries a Khushi-style crossbody bag, and decorates his walls, even his ceiling fan, with PK posters.

Depending on your appreciation of the Tollywood fan culture, the premise may seem either trivial or worthwhile for a full-length movie. The focus is certainly on eliciting the maximum laughter from the audience, and in that sense it can feel like a two-hour TikTok. But the plot has enough meat on it, enough twists and turns, to keep you engaged.

Some of the funniest bits of the script are when elements of "serious" storytelling are used during low-stakes situations. When Seenu is frustrated, he dramatically drinks Coke - instead of the PK-sponsored Pepsi - as if he is downing a bottle of poison. In another memorable scene, Seenu answers obscure trivia questions about PK in order to win two seats, with a background score that builds tension as if he were on Kaun Banega Crorepathi. By the climax, Seenu is like Gollum with his ring - ready to kill or be killed for those darn tickets.

A lot of the movie's charm comes from its snappy, witty, colloquial dialogues, oozing with Telangana slang. The joke density is absurdly high - nearly every line of every character is written to sound funny. And the script is heavy on nostalgia and small-town humour: a paan-chewing barber spewing flecks of red on his clients as he talks to them; a nosey uncle ratting on Seenu for eating Cool Cakes, as though he were snorting lines of cocaine; and a guy mournfully singing "Aye Chikitha" at the funeral of a PK fan.

Most of the actors in the movie are first-timers, including the hero and heroine, Srikanth and Sanchitha. Srikanth takes time to settle into Seenu's skin - his acting gets better as the story progresses. He is a bit off-kilter and subdued in the intro scenes, but by the end, when he emotes anger and frustration, he really comes alive. Sanchitha has only to smile and blush for her short role, and yes, she smiles and blushes... alright. Some of the best acting comes from one-off characters like shopkeepers and old mourning ladies.

Tanikella Bharani as Seenu's father nails the Telangana accent, and it's a joy to watch him in his element, speaking with a natural cadence. Vennela Kishore, yet again, steals the show as Ravanna - a guy who is a lion in public and a mouse at home.

Director Vamshi plays a recurring character as Ravanna's loafer brother, and his comedic chops are evident. I can't imagine it was a mere coincidence that he plays a character that turns up at the wrong place at the wrong time, and thus changes Seenu's luck - just as Khushi director Suryah did in his movie.

Music director Radhan excels at capturing the rhythms of rural Telangana, and gives us some upbeat songs.

FDFS may not meet everyone's humour sensibilities. If your brand of jokes involves watching comedians get slapped across the face, or launched from a cannon, then FDFS won't cut it. And it isn't for those looking for elaborate high-stakes plots. But if you want to pass the time roaming the streets of Narayankhed with a fanboy, eavesdropping on crackling dialogue, then First Day, First Show is your game.
Share. Save. Connect.
Tweet
FIRST DAY, FIRST SHOW SNAPSHOT 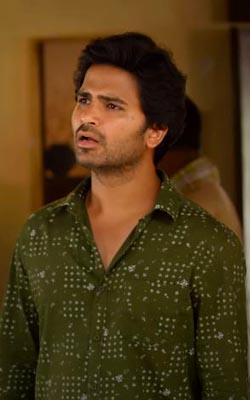 ADVERTISEMENT
This page was tagged for
First Day, First Show telugu movie
First Day, First Show reviews
release date
Srikanth Reddy, Sanchitha Bashu
theatres list
Follow @fullhyderabad
Follow fullhyd.com on
About Hyderabad
The Hyderabad Community
Improve fullhyd.com
More
Our Other Local Guides
Our other sites
© Copyright 1999-2009 LRR Technologies (Hyderabad), Pvt Ltd. All rights reserved. fullhyd, fullhyderabad, Welcome To The Neighbourhood are trademarks of LRR Technologies (Hyderabad) Pvt Ltd. The textual, graphic, audio and audiovisual material in this site is protected by copyright law. You may not copy, distribute, or use this material except as necessary for your personal, non-commercial use. Any trademarks are the properties of their respective owners. More on Hyderabad, India. Jobs in Hyderabad.