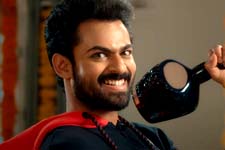 Sai Tulasi Neppali / fullhyd.com
EDITOR RATING
6.5
Performances
Script
Music/Soundtrack
Visuals
6.5
6.5
7.5
7.5
Suggestions
Can watch again
No
Good for kids
No
Good for dates
Yes
Wait for OTT
Yes
Family-oriented movies. Remember those? Ranga Ranga Vaibhavanga is a welcome respite from the slew of formulaic mass-hero duds of the recent months. Although the story isn't particularly inventive, it has likable characters, sensible dialogue and, most importantly, a beating heart. With a runtime of 140 minutes, RRV may be uncomfortably long, but writer-director Gireesaaya brings us a true-blue, whole-family "timepass" flick.

RRV's message is that life can be a fun celebration if we keep our egos in check. Best friends Chanti (Prabhu) and Ramudu (Naresh) are inseparable. They live in identical houses next to each other, with their wives (Tulasi Shivamani and Pragathi respectively) and their posse of children mingling as one big happy family. But then, two of the kids, Radha (Ketaki Sharma) and Rishi (Vaisshnav Tej), who were once BFFs, get into a silly fight during their hormone-laden teenage years and resolve to never speak to the other person unless spoken to first. Their ten-year-old vendetta finally ends when Radha gets in trouble, and her silently pining lover Rishi comes to her rescue. Everything seems hunky-dory, but then a bigger clash, caused by Radha's brother (Naveen Chandra) tears their tight-knit families apart. It's up to these lovers to help their families unite again.

At first blush, the script seems adamant about subverting tropes and giving us fresh scenes. But dig a little deeper, and you find that Gireesaya is simply substituting one cliché for another. For example, in Rishi's introduction, he is seen rescuing Radha from kidnappers, but ...it's all a dream. In another scene, there is a comedian (Satya) doing comic renderings of that old sentimental song "amma chudali" at a drinks party, but it's clearly a stand-in for an item song. Instead of the commonly used sadistic, over-protective, abusive husband character (Raghu Babu), there is a sadistic, over-protective, abusive wife (Jhansi). Ironically, these scenes are unnecessary tangents that do little more than give you butt-aches from sitting in your seat far too long.

Then there are some awful cringe bits that belong in a sleazy mid-90s movie - Rishi being a peeping tom while Radha puts on a saree, or comedians getting slapped for shits and giggles. The story's overall treatment of men as the toxic egotists, and women as the meek sex that needs protection and permission, is also nothing new.

Yet, the movie passes the "sigh test" - no audible moans of pain from the audience. And it does so because the script at least attempts to be different. For instance, in a kidnap scene, the bad guy has a sidekick called Logic who weighs the pros and cons of the boss' moves. He suggests giving the captive "three lifelines" to escape. The dialog writing is clever and witty, not the same old bang-bang fight.

Although the structure of the story is entirely predictable, its approach toward the climax is unexpected. And there are some delightful scenes along the way, such as when the matriarchs of the two families drop their animosity by fangirling over their favorite TV serial actor.

RRV's visuals and music elevate it in all the right ways. Veteran music director Devi Sri Prasad (whose songs are a toss-up between boring and transcendental) pulls a rabbit out of his hat for this one and gives you a few songs (like "Kothaga Ledenti") that will make it into your playlist repeats for the year. A standout song is "Siri Siri Muvvallone" where cinematographer Shamdat Sainudeen uses gorgeous slow-motion shots to capture the chaos of objects falling all around the lovers.

Vaisshnav Tej, who plays the lead Rishi, is a star kid (he is Sai Dharam Tej's brother) and may have received a red carpet welcome into the film industry, but he has big expectations to fulfill. He is not terrible like some other debutants from the Alluri-Konidela family, but neither does he carry the charm and screen presence of his uncle (Chiranjeevi). He runs in the middle of the pack. And he has made smart choices with his roles thus far, including with RRV, where a big cast of characters-actors means that he doesn't have to carry the weight of the movie. As such, Vaisshnav does a decent job here.

Ketaki Sharma, too, is squarely average - although that may be a function of her shallow role as a woman who must be sexy, sulky or scared, and nothing more.

RRV's best performances come from unexpected places. Naveen Chandra is a standout as Rishi's bull-headed, angry brother. His large, buggy eyes and imposing frame make him a perfect casting choice as the prideful politician and possessive brother. Pragathi and Tulasi, who play the two bickering mothers, get the biggest laughs. Comedian Satya has an over-the-top role as a village sarpanch which is funny only in his able hands.

Ranga Ranga Vaibhavanga may not be the most wholesome family movie, but it makes a fervent effort to entertain you with romance and laughter. And as its message goes, maybe the key to having fun is to let its small issues slide.
Share. Save. Connect.
Tweet
RANGA RANGA VAIBHAVANGA SNAPSHOT 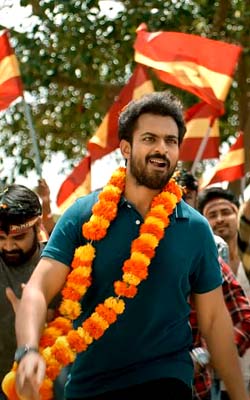 Glad to see you are an avid follower of fullhyd. It is always appreciated.

With me, I got a huge opportunity in my career so had to change jobs and cities. With that, my frequency of reviews has taken a hit. I hope we can work something out in the near future but until then, Sai Tulasi and Punarvasu are holding down the fort very well. Kudos to them, their skills, and their decorum with reviews as I, for one, wouldn't have been as kind to Liger in any way.
LEAVE A COMMENT
fullhyd.com has 700,000+ monthly visits. Tell Hyderabad what you feel about Ranga Ranga Vaibhavanga!
MORE MOVIES
Latest Reviews
The Ghost
Godfather
Don't Worry Darling
Vikram Vedha
Ponniyin Selvan - 1
more
Naane Varuvean
Nene Vasthunna
Krishna Vrinda Vihari
Saakini Daakini
Where the Crawdads Sing
Everything Everywhere All At...
Aa Ammayi Gurinchi Meeku Che...
Brahmastra: Part One - Shiva
Oke Oka Jeevitham
Brahmastra: Part One - Shiva
More Recent Reviews
First Day, First Show
Ranga Ranga Vaibhavanga
Dragon Ball Super: Super Her...
Liger
Liger (Hindi)
more
Thiru
Karthikeya 2 (Hindi)
Karthikeya 2
Macherla Niyojakavargam
Raksha Bandhan
Laal Singh Chaddha
Bimbisara
Sita Ramam (Hindi)
DC League Of Super-Pets
Sita Ramam
Random Reviews
Gladiator
The Scorpion King (Telugu)
Analyze That
XXX
The Interpreter
more
The Myth - Veer Yodha
Fantastic Four - 2
Chal Chala Chal
Mouna Raagam
Something Borrowed
Hugo (3D)
The Hangover 3
Vichakshana
Cinderella (2015)
Days Of Tafree
SEARCH MOVIES
Dissatisfied with the results? Report a problem or error, or add a listing.
ADVERTISEMENT
SHOUTBOX!
{{todo.name}}
{{todo.date}}
[
ip{{todo.ip}}
]
{{ todo.summary }}... expand »
{{ todo.text }} « collapse
First  |  Prev  |   1   2  3  {{current_page-1}}  {{current_page}}  {{current_page+1}}  {{last_page-2}}  {{last_page-1}}  {{last_page}}   |  Next  |  Last
{{todos[0].name}}

ADVERTISEMENT
This page was tagged for
Ranga Ranga Vaibhavanga telugu movie
Ranga Ranga Vaibhavanga reviews
release date
Panja Vaisshnav Tej, Ketaki Sharma
theatres list
Follow @fullhyderabad
Follow fullhyd.com on
About Hyderabad
The Hyderabad Community
Improve fullhyd.com
More
Our Other Local Guides
Our other sites
© Copyright 1999-2009 LRR Technologies (Hyderabad), Pvt Ltd. All rights reserved. fullhyd, fullhyderabad, Welcome To The Neighbourhood are trademarks of LRR Technologies (Hyderabad) Pvt Ltd. The textual, graphic, audio and audiovisual material in this site is protected by copyright law. You may not copy, distribute, or use this material except as necessary for your personal, non-commercial use. Any trademarks are the properties of their respective owners. More on Hyderabad, India. Jobs in Hyderabad.