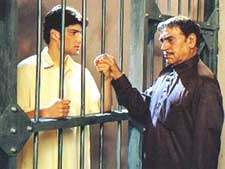 Mithun Verma / fullhyd.com
EDITOR RATING
3.0
Performances
Script
Music/Soundtrack
Visuals
NA
NA
NA
NA
Suggestions
Can watch again
NA
Good for kids
NA
Good for dates
NA
Wait to rent it
NA
A superhero can perform unbelievable feats. That makes all the Indian movies, superhero movies. If the heroes don't to unbelievable things, the makers will. It's a specialty only of superheroes to rescue damsels in distress but wear their undies all wrong. Okay, so not many superhero movies show the hero removing the flimsy undies of the damsel and strap them over his face. But if ever there was such a situation, you bet your last penny that you've seen it in this one. This one has everything else that's equally exhilarating and unhygienic. New hero, new heroine, washed up supporting cast (excluding Amrish), chestnut story and Pakistan.

Ashutosh Rana is an Indian army officer, kidnapped by terrorists and taken to Pakistan. The way he acts, it's a gross disrespect to all the jihadi groups that they didn't gag him and shove a grenade where the sun doesn't shine. Instead, the makers haul a chocolate-faced hero at us. I don't mean to say that he's sweet. I mean to say that he's made out of plastic on the outside.

Ashutosh's younger brother, Sunny (Kapil Jhaveri), crosses the border and lands in Pakistan to rescue him. Once there, he encounters a Pakistani beauty Rukhsar (Saloni Aswani). Subsequently, he decides that a dumb babe is more his league than a rescue mission in enemy territory. So he decides to go ahead with the rescue mission. Aw shucks, poor old flower-face has a thorn for a brain.

Anyway, you cannot stop hunger, love and Uday Kiran. So our lead pair dreamingly float away at this juncture. But getting giddy, Sunny reveals his identity and motive, which shocks Rukhsar. She thought this was a documentary on empowerment of women. Sorry sister, but if it's any consolation, you can be a part of the documentary on struggling actresses.

Since half of India has seen Gadar, Amrish Puri comes as no surprise for the role of a stern Paki-army guy. He plays Rukshar's dad, whose love and affection for his daughter clash with his ideals, and the Brigadier has to make a choice. Whether to stop trying to make sense out of the film, or kill the hero-heroine and get it over with. After a lot of contemplation (and remuneration), he decides to hang on till the end and laugh it all at once.

After a lot of passionate kid blabber, a mundane solution is dished out and we're politely asked to get the hell out of the theater. So, primarily a love junk, what makes Dil Pardesi Ho Gayaa different from films of its ilk is that the story starts in India, progresses in Pakistan and ends at the Line of Control. In other words, it's globally painful.

Amrish Puri, Prem Chopra and a couple of good songs try to put a finger against the leak in the boat, but it drowns completely. Compared with other Pak-India love stories like Gadar and Refugee, this one falls flat, breaking the front teeth clumsily. But to end on a high note, the Paki-bashing is toned down here. Suggestions of a more tolerant attitude towards each other are also promoted. The only tolerance we'll have is to give a half-a-star extra.
Share. Save. Connect.
Tweet
DIL PARDESI HO GAYAA SNAPSHOT

ADVERTISEMENT
This page was tagged for
Kukatpally Pardesi song
Dil Pardesi Ho Gayaa hindi movie
Dil Pardesi Ho Gayaa reviews
release date
Kapil Jhaveri, Saloni Aswani
Follow @fullhyderabad
Follow fullhyd.com on
About Hyderabad
The Hyderabad Community
Improve fullhyd.com
More
Our Other Local Guides
Our other sites
© Copyright 1999-2009 LRR Technologies (Hyderabad), Pvt Ltd. All rights reserved. fullhyd, fullhyderabad, Welcome To The Neighbourhood are trademarks of LRR Technologies (Hyderabad) Pvt Ltd. The textual, graphic, audio and audiovisual material in this site is protected by copyright law. You may not copy, distribute, or use this material except as necessary for your personal, non-commercial use. Any trademarks are the properties of their respective owners. More on Hyderabad, India. Jobs in Hyderabad.