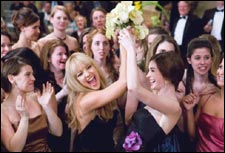 And that is the deal here - this is a movie from that school of filmmaking that is completely not susceptible to a poor guy hunched over his laptop shaking his fist at it. It is not meant to spark a minor furore or even a debate among any people, because it is squarely going to coast under the radar of anyone who is not interested in it. Those who want to watch it don't care, either - they will, one way or another; and short of picketing Prasads, I can't imagine much I can do to stop them.

But I saw it, and now I shall unleash my scathing opinion on it, wag my finger, and stay away from spoilers, for that is the wont of critics. You are more than welcome to stay.

Kate Hudson and Anne Hathaway star in Bride Wars as childhood friends who have always dreamed about getting married in the same month in the same hotel. They even have a planner who messes up the booking by putting them in the same date at the same place. I know, horrendous, right? As any self-respecting women who happen to be friends would do - they are at it like street dogs fighting over leftover wedding cake.

And that is it - the film never moves beyond the high concept pitch and the funny promos. For the next hundred or so minutes you get to watch two pretty women with lots of money and time destroy their valuable friendship with each other over a small mistake and an event that is basically a way for them to show off. The movie inadvertently shows us how ugly this can get, too - of course no one cares that that is what is happening.

With the kind of run she is having, Kate Hudson is trying really hard to make this work. She is not confident, but she is eager to please, and that works for her. Anne Hathaway, the one usually acclaimed as the actress of the two, is the one who is phoning it in. Thinking that her pretty face will carry this through, she isn't even trying.

The script, as expected, is terrible. But it is written by one of the supporting cast members. Who has also acted in bit roles before, and has written exactly three episodes of television shows (not good ones) before. Yep, it's pretty much bottom of the barrel. In films like these no one gives a #$I%, but here they are so far past that point that they don't give a #$I% about giving a #$I%.

The corporate hubris in this film is admittedly funny to look at after the economic crash. White over-privileged women maxing out their credit cards to fight for the opportunity to spend more money is funny even without that, but with the current economic downturn it is like a fantasy comedy film that someone with a devious mind would make. But the director isn't even interested in the satirical value of the plot. It's just a plain stupid, boring film.

Nothing - not the writing, not the music, or even any of the shots - is something that looks like it was done by someone who cared for anything other than counting money. If you are the kind of person who thinks this is an appealing film to watch, let nothing, not even this review, stop you. If you really couldn't care less, but know someone who wants to watch this film, don't even try.
Share. Save. Connect.
Tweet
BRIDE WARS SNAPSHOT

ADVERTISEMENT
This page was tagged for
Bride Wars english movie
Bride Wars reviews
release date
Kate Hudson, Anne Hathaway
theatres list
Follow @fullhyderabad
Follow fullhyd.com on
About Hyderabad
The Hyderabad Community
Improve fullhyd.com
More
Our Other Local Guides
Our other sites
© Copyright 1999-2009 LRR Technologies (Hyderabad), Pvt Ltd. All rights reserved. fullhyd, fullhyderabad, Welcome To The Neighbourhood are trademarks of LRR Technologies (Hyderabad) Pvt Ltd. The textual, graphic, audio and audiovisual material in this site is protected by copyright law. You may not copy, distribute, or use this material except as necessary for your personal, non-commercial use. Any trademarks are the properties of their respective owners. More on Hyderabad, India. Jobs in Hyderabad.