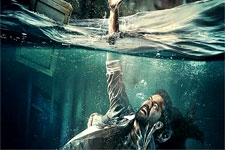 Chaitanya Karthik / fullhyd.com
EDITOR RATING
3.0
Performances
Script
Music/Soundtrack
Visuals
5.0
2.0
4.0
2.0
Suggestions
Can watch again
No
Good for kids
No
Good for dates
No
Wait to rent it
No
One reason the horror genre doesn't really get the respect it deserves is that the makers almost always resort to the same set of clichés and scary tropes to elicit fear out of the audience. Of course, there are horror films that deviate from the usual templates and use novel ways of sending chills down our spines, like A Quiet Place and Hereditary, but Bhoot does not belong to this category.

The movie opens with a shot of a mother singing a lullaby to her three-year-old daughter Meera. If you are into horror movies, you'd know that that wouldn't be the last time you'd hear that lullaby. Except that the lullaby here is Twinkle Twinkle Little Star, and no matter what you do with that rhyme, it can never get eerie because we all have ruined it in various ways in our endeavours to sing.

The family of three celebrate Meera's birthday on an infamous ship called Sea Bird, which is the focal point of the story. The husband, who is the Captain, and wife are dancing together, and being the good parents that they are, don't notice their daughter disappearing into some remote corner of the ship after she hears the sound of someone (read "something") snapping their fingers. Meera has a cliché - sorry, doll - with her, which is cute only the first time you see it. She disappears. The people on the ship disappear. The ship itself disappears.

A few years later, the enormous Sea Bird mysteriously appears on the shore of Mumbai, and it ominously towers over the city in grand fashion. A young couple, clearly with a low IQ, decide to play hide and seek with each other inside the ship, and they aren't good at the game because their bodies are soon found on the beach. Prithvi (Vicky Kaushal) and his friend Riaz (Akash Dhar), who work at the port authority, are entrusted with the job of towing away Sea Bird from the shore.

There are rumours floating around that Sea Bird is haunted, but our attention shifts to Prithvi, who is also haunted by his own past. A rafting experience with his family has gone horribly wrong and he ends up losing his wife (Bhumi) and his daughter. He never really comes to terms with his loss, and keeps having hallucinations about them. However he is not ready to move on from that because that is the only way he gets to be with them.

When he inspects Sea Bird, he comes across the creepy doll that wasn't creepy when you first saw it. He senses that there is something amiss, and eventually he's sure that the ship is haunted.

What would one do at that point of time? They'd say to hell with the ship and back off. Prithvi, though, says "let's go to hell with the ship", and is obsessed about finding out what's going on with it. After a series of scares that make you laugh, the story gets to the point where it is revealed that the ghost on the ship, who looks like a young girl, is not a ghost, and that she is actually alive but has been possessed by another ghost on the ship. Even though nobody has a clue about what they're saying, they all board the ship to exorcise the ghost and save the little girl. The story of the ship and how our ghostbusters get to the bottom of things (literally) and save the girl is the rest of the story.

If you want to know how much anyone is into the horror genre, ask them to watch this movie and name all the films this one reminds them of. The director was clearly taking notes from other horror movies while making this one, and it shows. The snapping is just a tweak of the famous "Wanna play hide and clap?" scene from The Conjuring. Meera getting kidnapped by the ghost is a blatant rip-off of The Poltergeist. The ghost looks like it's the fusion of the one from The Grudge and Samara from The Ring, and it has more variations in looks in this film alone than Arjun Kapoor has had in his entire career. At one point, you don't know if there is just one ghost or if there are multiple ones. Maybe Bhanu Pratap Singh thought that doing that would help him bypass the plagiarism checker. The result is not a horror movie but a horrible movie.

The CGI is so bad that it feels like the producers hired kids who just discovered animation in Powerpoint, to work on the effects. Despite the eerie atmosphere, courtesy of the magnificent and malevolent Sea Bird and its inner intricate designs, the scares only manage to tickle your funny bone and not your spine. This is more comedy than tragedy, but even if it were a comedy, it'd be a bad comedy. It simply fails in every department. It's sad that the potential of the haunted ship to induce scares is conveniently ignored.

The only positive about the film is Vicky Kaushal, who makes it bearable. He is the relationship between the audience and the movie, and the scenes where he is in the company of his own demons are where he is at his best, thus lending some credibility to an otherwise ludicrous script. All the dumb things all else in this movie do can be forgiven because of Kaushal's presence.

All the other characters are just lame, and even if you edited out their portions it would make no difference to the film. Bhumi Pednekar shows up just to die, and nobody knows (or cares about) what happens to Professor Joshi after his campaign against malaria.

There are some really naive scenes in the movie. Like in the scene where our ghostbusters are exorcising the ghost, Professor Joshi (Ashutosh Rana) holds something that looks like a mosquito coil, making you wonder if he's fighting a demon or dengue. Also, he chants something that you can hear on devotional channels, and the ghost screams in pain. Why couldn't they just bring a television set with them and switch on Bhakti TV?

If you want to watch this, just keep in mind that Ram Gopal Verma is thanked in the credits before the movie. What's even more worrisome is that the title says "Part One".
Share. Save. Connect.
Tweet
BHOOT - PART ONE:... SNAPSHOT
BHOOT - PART ONE: THE HAUNTED SHIP SNAPSHOT 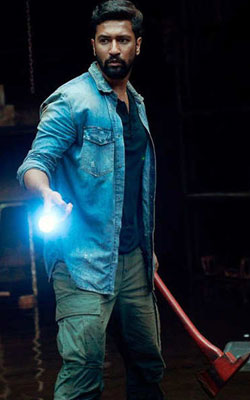 ADVERTISEMENT
This page was tagged for
Bhoot - Part One: The Haunted Ship hindi movie
Bhoot - Part One: The Haunted Ship reviews
release date
Vicky Kaushal, Bhumi Pednekar
theatres list
Follow @fullhyderabad
Follow fullhyd.com on
About Hyderabad
The Hyderabad Community
Improve fullhyd.com
More
Our Other Local Guides
Our other sites
© Copyright 1999-2009 LRR Technologies (Hyderabad), Pvt Ltd. All rights reserved. fullhyd, fullhyderabad, Welcome To The Neighbourhood are trademarks of LRR Technologies (Hyderabad) Pvt Ltd. The textual, graphic, audio and audiovisual material in this site is protected by copyright law. You may not copy, distribute, or use this material except as necessary for your personal, non-commercial use. Any trademarks are the properties of their respective owners. More on Hyderabad, India. Jobs in Hyderabad.