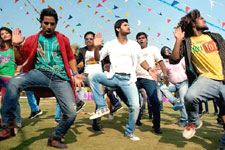 Kritika Deval / fullhyd.com
EDITOR RATING
4.0
Performances
Script
Music/Soundtrack
Visuals
6.0
3.0
4.0
6.0
Suggestions
Can watch again
No
Good for kids
No
Good for dates
No
Wait for OTT
Yes
So... We'd like to begin with a note to the filmmakers regarding an item song about 15 minutes into the film, featuring men dancing for women at a bar in what seems to be a commendable effort at portraying equality.

Note to filmmakers: Men with super-ripped bodies, flexing muscles that cannot possibly be good for the health, are a male fantasy, and not a female one. We get that stereotypes are easy, and we don't mind them all that much. We just wished to point you in the direction of the right stereotypes the next time you want to show exactly how much women totally objectify men too y'all!

Here are five stereotypes off the top of our heads:

1. Show men flexing muscles and lifting things, but make those things useful, like a sofa, so patronesses can fantasize killing the smug little dust bunnies that are surely hiding beneath, just out of reach.
2. Have the song-and-dance built on men cooking. Make them churn butter, or whip up a soufflé, or fold in a tiramisu.
3. Put them in suits and make them listen to patronesses' feelings.
4. Have them walk around with presents.
5. Make a bunch of men fight a bloody fight to death to win their patronesses' favours.

Now that we've exhausted our day's quota of wisdom, we can get on with the review.

Gaalipatam, as you may (probably) have guessed, is basically a well-intentioned story about the shifting dynamics in the relationships between men and women. We start off with a married couple, Karthik (Aadi) and Swetha (Erica Fernandes), who have realized that all is not well with their marriage after a drunken fight that devolves into flashbacks that take up most of the film.

As it turns out, Karthik had an affair with a free-spirited beauty called Parineethi (Kristina Akheeva) who couldn't reconcile with the idea of marriage, while Swetha was relentlessly pursued by a classmate Aarav (Rahul Ravindran) who broke down her defenses over four years to finally make her fall in love with him.

However, both Karthik and Swetha choose to go along with their parents' wishes, and agreed to marry each other, a choice that seemed to have worked out, right up until the moment of reckoning that occurs right at the beginning. The two then, upon mutual agreement, decide to get in touch with their former flames.

The rest of the film hinges upon whether or not they can reconcile, and whether friends and family can help them save their marriage.

The problem with this essentially intriguing story, though, is that there is too much rhyming. Nearly everything that everyone says rhymes. The characters rhyme while hooking up, while breaking up, while drinking, while discussing life and its vagaries, even while trying to "comedy". You will probably find yourself laughing at their ridiculous efforts at reducing all meaningful dialogue to high school creative writing style clichés, far more than at their actual attempts at making you laugh.

The problem, also, is that for all its pretentions of travelling wide and far out of the box, the film concludes itself by basically stuffing itself back into the box and telling us that the box is the best place. Every "new" way of thinking is eventually decreed to not be right for our lead pair. Every bold idea, while applauded in other characters, is considered outlandish by the couple we ought to care most about.

Added to the piles and piles of hypocrisy and inconsistency in idea is a plot that is just as inconsistent - fresh and exciting one moment, dragged out the next, and in the next devolving into a Maruthi-style treatise on how young people basically don't know anything about anything.

The performances on the whole are average, because all the actors are playing very average characters. Aadi looks like every dialogue and expression are being dragged out of him on pain of death. Both Erica and Kristina are pretty enough to let them get away with the non-acting that their cardboard-flat characters require. Rahul Ravindran is basically just there.

The cinematography is quite pretty, complemented by equally creative editing. A few transitions, including one where the hero meets Parineethi for the second time, are very nicely done. The production values, however, swing violently from high to low, just like everything else about the film. The music is extremely average.

In all, Galipatam is a film that could have gone right on a lot of counts. We know that it goes wrong, instead, but what we cannot figure out is exactly how wrong.
Share. Save. Connect.
Tweet
GAALIPATAM SNAPSHOT 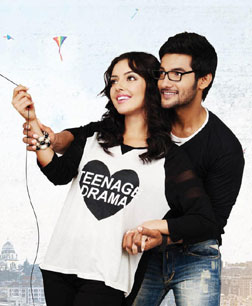 ADVERTISEMENT
This page was tagged for
gaalipatam telugu movies
Gaalipatam telugu movie
Gaalipatam reviews
release date
Aadi, Erica Fernandes
Follow @fullhyderabad
Follow fullhyd.com on
About Hyderabad
The Hyderabad Community
Improve fullhyd.com
More
Our Other Local Guides
Our other sites
© Copyright 1999-2009 LRR Technologies (Hyderabad), Pvt Ltd. All rights reserved. fullhyd, fullhyderabad, Welcome To The Neighbourhood are trademarks of LRR Technologies (Hyderabad) Pvt Ltd. The textual, graphic, audio and audiovisual material in this site is protected by copyright law. You may not copy, distribute, or use this material except as necessary for your personal, non-commercial use. Any trademarks are the properties of their respective owners. More on Hyderabad, India. Jobs in Hyderabad.