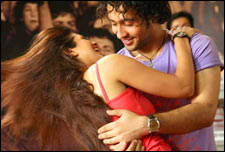 Jaiwantika Dutta-Dhupkar / fullhyd.com
EDITOR RATING
4.0
Performances
Script
Music/Soundtrack
Visuals
4.0
4.0
5.0
3.0
Suggestions
Can watch again
No
Good for kids
Yes
Good for dates
Yes
Wait to rent it
Yes
A film that was made clearly for optimists to fall in love with, Jashnn is an oh-so-feel-good film with a dopamine factor peaking. It's one of those syrupy-sweet tonics that are good for a weary old world.

There is the world, as a hard-boiled cynic might see it. Then, there is the world smothered in honey, maple syrup, chocolate syrup and coffee almond icing - the works. Jashnn is a celebration of just such a world - you could even argue that it is a mockery of a world that is not. And yes, it does do everybody a great deal of good.

In these times of an almost unholy belief in power and money, here is a film that asks of you that all your social conditioning be tossed to the dogs, along with good reason and logic - in the end, it is pristine talent that not only stands a decent chance, but also wins hands down.

Akash Verma (Adhyayan Suman) has talent. He is, as girlfriend Sara (Anjana Sukhani) calls him, a â€˜two-in-one philosopher-musician', and someone who finds novel solutions to the problems life poses him.

Akash is a washout who's purely dependent on his sister (Shahana Goswami), who is the full-time mistress of a mean businessman, Aman Bajaj (Pakistani actor Humayun Saeed). Akash finds love in Sara, Aman Bajaj's sister, a headstrong girl who leaves home for love and the rosy future she sees with Akash. Sara promotes his fledgling music career in complete defiance of her brother, and even sells her solitaires to get some money for his demo tape. All this, when she's not giving him the routine free food, shelter and moral support.

As the shocking news of their affair reaches the families, Aman Bajaj is outraged, and swears to destroy Akash and his dreams, which he very nearly does. Akash's sister, however, has faith in true love. She supports the lovers, even as she starts to bring back her own self-respect.

Then, there is the omnipotent musical talent hunt - sponsored by Aman Bajaj, no less - that changes Akash's future in one night. Of course, what we didn't understand is why it was necessary for the sponsor to be on-camera during the show, influencing judges' decisions, giving away prizes, and even giving a tearful speech in which he concedes to being Loser No. 1.

Akash's rise from a nobody to a somebody might have a lot to do with intelligent planning, true love, or even the fact that his stars were in the right place and at the right time (more than he was himself). However, the directors seem to think that becoming a somebody from a nobody has a lot to do with swabbing toilet floors at hotels and eating cold mess lunches, going by the amount of footage the fact hogs. While no one can deny a character the romanticism of a good "struggle" in his or her quest to become somebody, the directors could have surely thought of something more musical than swabbing toilet floors, even if they do give some unconvincing psychological mumbo jumbo to explain it.

Jashnn is an endearing film, despite its weaknesses. It gives you hope â€" the kind that lets you believe that you can leave home without a guitar, and still rock the audience at a major music event months later. Or the kind that lets you believe you can be a cranky stranger ogling women in coffee shops but get them to not just hand you their numbers the very next day, but also have your babies a few months later and fund your career in between.

Directors Raksha Mistry and Hasnain Hyderabadwala seem to have matured from previous Bhatt blunders like The Killer and The Train. The scripting on this one could have been tauter and more colorful perhaps - it abounds in cliches, though they are not uncomfortable ones. The film, shot with a huge budget in South Africa and India, is visually appealing - though hardly any credit for that can be given to good cinematography. The cinematography, at best, is above average, and while the film has a general slick feel, it does nothing special at all.

Shahana Goswami is the best of the entire lot - it's certainly a pleasure to see her back in action after Rock On!!, and she's absolutely steals the show in Jashnn. Both Adhyayan Suman and Anjana Sukhani are lookers, and the latter, with an interesting role, does justice to her part, though she could do better. Saeed has a subtle role, which doesn't require him to act much, and is alright.

The music, like for most Bhatt films, is a plus, and is a confluence of both Indian and Pakistani bands. It's also the kind of music you'd want to keep listening to for a little longer after the film has left theatres.

It's been a while since a film like Jashnn has hit screens. It is faintly reminiscent of some movies in the â€˜80s and early â€˜90s where strugglers had all the luck in the world when they wanted to make it big - they either married rich, or struck gold by fluke. Jashnn reminds you of all those pro-worker films which hated the bourgeoise - so what if we now have a band instead of a labor union.

All said and done, Jashnn is just one of those films that leave you smiling; it makes you a happy believer in its tale of wild promise for three hours, and it says the most optimistic things - stuff you badly want to hear.
Share. Save. Connect.
Tweet
JASHNN SNAPSHOT

ADVERTISEMENT
This page was tagged for
khatrimaza jashnn
Jashnn hindi movie
Jashnn reviews
release date
Adhyayan Suman, Anjana Sukhani
Follow @fullhyderabad
Follow fullhyd.com on
About Hyderabad
The Hyderabad Community
Improve fullhyd.com
More
Our Other Local Guides
Our other sites
© Copyright 1999-2009 LRR Technologies (Hyderabad), Pvt Ltd. All rights reserved. fullhyd, fullhyderabad, Welcome To The Neighbourhood are trademarks of LRR Technologies (Hyderabad) Pvt Ltd. The textual, graphic, audio and audiovisual material in this site is protected by copyright law. You may not copy, distribute, or use this material except as necessary for your personal, non-commercial use. Any trademarks are the properties of their respective owners. More on Hyderabad, India. Jobs in Hyderabad.