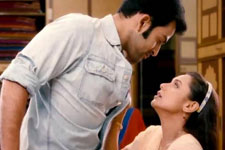 Nupur Barua / fullhyd.com
EDITOR RATING
6.0
Performances
Script
Music/Soundtrack
Visuals
7.0
5.0
7.0
7.0
Suggestions
Can watch again
Yes
Good for kids
No
Good for dates
Yes
Wait to rent it
No
If Vidya Balan can do it, so can Rani Mukherji. And how! With Aiyyaa, quite safely the first of its kind in the Hindi film industry, the dynamic Bengali actor takes the meaning of heroine-centric films to a whole new level. Add to that the unconventional love interest and the wakda (insane, not all there, crazy, twisted) family members and friends, and you have a kitschy, bling-laden, exaggerated version of a romantic comedy.

Meenakshi (Rani Mukherji) is a middle-class Maharashtrian mulgi, who lives somewhere in Pune with her chain-smoking (four at a time) father (Satish Alekar), nagging and paranoid mother (Nirmiti Sawant), college drop-out stray-dog-loving brother Nana (Ameya Wagh), and a wheelchair-bound grandmother (Jyoti Subhash) in goggles, whose golden teeth will eventually be bequeathed to her granddaughter. In short, the house the Deshpandes live in can pass off as a mental asylum, and its presence is enhanced by the gigantic public garbage bin that the civic body has placed outside the gate, for the use of the entire community.

Meenakshi is filmi, and that is an understatement. She emulates her favourite actresses - Sridevi, Madhuri and Juhi - and has frequent dream sequences in which she is the protagonist. Her dreams never have a male lead, however, because she is still looking for some man to come and sweep her off her feet, even as her mother parades her in front of numerous suitors and their families.

Meenakshi has a job in an Arts college, where she befriends the Bollywood version of Lady Gaga - Maina, a.k.a. Gaga-bai (Anita Date) - a bizarre woman who resembles the rabbit from the Lijjat Papad ad, a fact that is driven home at some point towards the end.

And then, suddenly, without warning, Meenakshi falls in love at first sniff, with a brooding, bloodshot-eyed Arts student, Surya (Prithviraj). She learns his language, Tamil, with the help of the college canteen boy (Pakada Pandi), and makes several futile attempts to strike up a conversation with him, but neither does she get anywhere with Surya, nor does he seem to know of her existence.

The first 30 minutes or so of the movie are all about entertainment, entertainment, entertainment. All the characters are established, and all the dilemmas put in place. The heroine defies, lusts, loves, fantasises, and does everything else that a hero in love usually does. The problem (no, it is not a perfect movie) lies not in the concept, but in its execution. You get two hours of a plot that plays in a loop - crazy family antics, slogan-screaming grandmother, fantasy sequences, numerous heaving sighs and sniffing, obsessive stalking, schizophrenic mania, and intense gazing by the hero. The screenplay could have been shortened by at least half an hour, before spiralling into a climax that includes an unpredictable (and unnecessary) twist, and a sudden change in the basic nature of almost all the characters.

Rani Mukherji is in her element here. She may have overdone it a bit by showcasing all her talents - three item numbers (lavani, Bollywood thrusts, Bharatnatyam, south Indian thrusts, and belly-dancing), erratic changes in portrayal of character (from self-indulgent vagueness and vanity to serious responsibility to obsessed lover), multi-lingual skills (Hindi, Tamil, Maharashtrian) - you get the drift. To her credit, she manages not to irritate, despite the (deliberate) inconsistencies.

Prithviraj is eye candy. Period. He has two lines of dialogue throughout the film, till the climax, when he suddenly cannot stop talking. He does converse with a couple of people in Tamil, but since there are no sub-titles (ditto for Rani's Maharashtrian dialogues), it is irrelevant to the plot movement. Aiyyaa is his first Hindi film, and he is here to stay.

The effective interpretation of all the other characters in the film by the various character actors is the result of terrific casting and good direction. Each eccentricity, no matter how OTT, is perfectly and believably depicted. The sincerity is apparent, but a special mention must be made of Subodh Dave, who plays Meenakshi's suitor whose version of a middle-class, about-to-be-married Maharashtrian man from Pune (whose idea of an ideal woman is Deepti Naval) is bang-on.

"Dreamum Wakeupum" has already topped the charts, and watching it on big screen is a trip. As Prithviraj puts it, the music video is "Bollywood's version of everything South Indian, multiplied by a thousand". "Aga Bai" and "Sava Dollar" both grow on you, and Rani has excelled herself in these numbers, as has Amit Trivedi.

Production and costume design are flawless, almost. This, we presume, is a result of the director's perfectionism. Sachin Kundalkar is versatile, and his vision is enhanced by the equally talented cinematographer Amalendu Choudary.

Aiyya is a must-watch for various reasons, and Rani is the biggest attraction. Even non-fans will be blown away by her quirky act. Despite its length, and lack of convincing plot points in the screenplay, the movie does not get too dull, thanks to the talented actors, and the distractingly hot Prithviraj. It is a fun movie, and if you are not the fussy sorts when it comes to realism, you should not miss what is now known as Rani's comeback (a term she resents).
Share. Save. Connect.
Tweet
AIYYAA SNAPSHOT 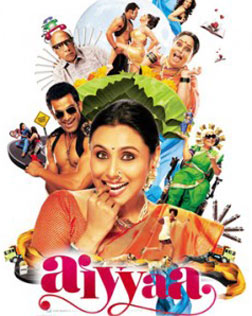 ADVERTISEMENT
This page was tagged for
aiyyaa full movie
Aiyyaa hindi movie
Aiyyaa reviews
release date
Rani Mukherjee, Prithviraj
Follow @fullhyderabad
Follow fullhyd.com on
About Hyderabad
The Hyderabad Community
Improve fullhyd.com
More
Our Other Local Guides
Our other sites
© Copyright 1999-2009 LRR Technologies (Hyderabad), Pvt Ltd. All rights reserved. fullhyd, fullhyderabad, Welcome To The Neighbourhood are trademarks of LRR Technologies (Hyderabad) Pvt Ltd. The textual, graphic, audio and audiovisual material in this site is protected by copyright law. You may not copy, distribute, or use this material except as necessary for your personal, non-commercial use. Any trademarks are the properties of their respective owners. More on Hyderabad, India. Jobs in Hyderabad.