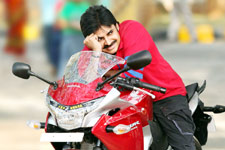 Kritika Deval / fullhyd.com
EDITOR RATING
8.5
Performances
Script
Music/Soundtrack
Visuals
8.0
6.0
7.0
9.0
Suggestions
Can watch again
Yes
Good for kids
Yes
Good for dates
Yes
Wait to rent it
No
The story began before the beginning. It began with the all-consuming war between the average Telugu citizen's all-consuming passions of politics and cinema (the latter passion Machiavelli-ed all over the place when bits of the movie were leaked). Then came furtive (not!) calls to black-ticket dealers. Out came the money saved up for a new outfit the "Pawanism" cult decreed. Queues to the ticket counters took over the streets of Hyderabad. Barricades went up as the Establishment sought to hold back the wave of the religious fervour of fans. And, finally, the fan made his way to the coveted seat.

And thus the show began.

The plot, of warring families and the thin line between intense love and intense hatred in a father-daughter relationship, is one that has been dabbled in before, for instance, here and here, and countless other times. Trivikram, thankfully, doesn't mess (too much) with the formula. He just adds Pawan Kalyan to it. Tollywood buffs will tell you about how that automatically "makes everything to the 'Power' of infinity".

Gowtham's (Pawan Kalyan) grandfather Raghuram Nanda (Boman Irani) is a steel tycoon in Milan, who hasn't had any contact with his daughter Nanda (Nadia) in years. Unable to see his sickly grandfather torn up over this any longer, Gowtham flies down to Hyderabad to try and machinate a reconciliation.

As he "hides" behind the guise of the family's driver, Siddhu, and worms his way into the heart of his lovely maradallu (there are two), he finds out that the family closet hides more than one skeleton.

Now it is upto him to make a chink in his aunt's steely armor, untangle the tangled lives of his cousins, pick one for himself, protect his aunt's family from unscrupulous businessmen, and do it all with his trademark blend of style, charm, and humour (please forgive us if we're getting the star and the character mixed up).

Simple enough a tale, but Trivikram makes it his, mostly with his zany, intelligent, and more-or-less relentless, sense of humour. While the highlight of the movie is probably the hero's entourage, whose job is to do everything for the billionaire-pretedending-to-be-chauffeur while making it seem as if he's the one doing it all; several other filler characters with well-etched backdrops add to the tale in ways that are as surprising as they are hilarious.

As is with most good comedy, your ability for belief is stretched, but at no point abused. Insane plot twists, like elopements within an elopement tale, or butlers-turned-Ugandan-millionaires (Brahmanandam) returning to cause elopements, invite you to laugh with them, rather than laughing raucously as you stare in bewilderment.

While no film on which the star's lines shine down is complete without a couple of cracked skulls, these cracked skulls are obtained with minimal jarring of senses, making Attarintiki? a movie you can safely take children with violent tendencies to without fearing that they will run to nearest pickaxe and scythe store from the theatre.

Feminists can relax too. While the movie still doesn't recognize women in general as real people, all of the leading female characters, including Nadia, Pranitha and Samantha, get well-etched, interesting personalities and plotlines actually necessary to the movement of the story.

Pawan Kalyan, as usual, delivers a performance as casual as it is effortless, shifting from buffoon to rich dude to man-on-a-mission, and never once giving up on the upper hand.

Pranitha is adorable as the innocent and empty-headed Prameela, and Samantha does justice to her role of Sasi, Prameela's snappy and spirited older sister.

Nadia is wonderful as the unyielding daughter who hates as hard as she loves. Boman Irani is the penultimate father, giving Prakash Raj a serious run for his money.

It is, however, the comedians, including Brahmanandam, M S Narayana, Raghu Babu, Ahuti Prasad, and several others, that keep you watching long after you've stopped caring about the father-daughter plotline.

The screenplay teases and rivets, and if it has a tendency to linger and smell the flowers, it makes up for by immediately giving you something new to think about. The cinematography is just as interesting as the screenplay, the camerawork matching Trivikram's vision frame for frame.

While the background score is as fun as the rest of the movie, the songs are more or less routine, with the hero's intro track being the least required.

Verdict: There is something about watching a film on a 70mm screen through a haze of newspaper confetti, barely being able to hear the lines over the din of crazed fans, and having to make a run for the gate (after the movie) to avoid overzealous reporters, that completes the experience of watching a movie in Hyderabad. When the in-between is as much fun as the before and after, what's not to like?
Share. Save. Connect.
Tweet
ATTHARINTIKI DAREDI SNAPSHOT 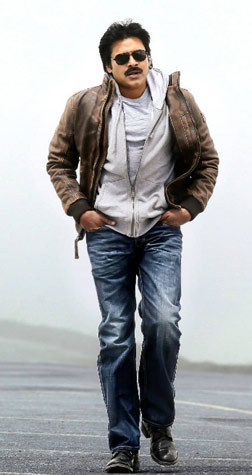 See Attharintiki Daredi full details
TOP COMMENT
Sri on 11th Oct 2013, 10:18pm | Permalink
Bad movie.The comedy track with Brahmi is irritating.The story is not at all good.
THere is one scene in movie which i felt vey bad.
Hero making his men carry his shoes.Man what kind of message you are giving .Is it waht so called Pawanism
13
2
ATTHARINTIKI DAREDI USER REVIEWS
1 - 15 OF 23 COMMENTS  |  NEXT  |  LAST
POSITIVE  |  NEGATIVE |  NEWEST  |  OLDEST  |  MOST HELPFUL  |  LEAST HELPFUL
USER RATING
7.1
11 USERS
Performances
Script
Music/Soundtrack
Visuals
NA
NA
NA
NA
Can watch again - NA
Good for kids - NA
Good for dates - NA
Wait to rent it - NA
ramarao on 19th Jan 2014, 9:40pm | Permalink
When i heard it created record i thought it must be an excellent movie. I watched recently and i am no fan of anybody. The lousiest, filthiest ,most irritating most unrealistic movie i ever watched. Trivikram has put a big cauliflower in the ears of telugu audience whose iq is below 20.
Ramanamurthy Kolli on 4th Dec 2013, 1:04pm | Permalink
You seem to be justifying everything.. You tell me how do you justify ( or even your Trivikram) a scene.. The hero helps the heroine by putting the Back Open Jip(or Zip) where the heroine is in / from a family of Super Rich and the Hero is Driver.. What justification is given and if you can't call it a non-sense?


Pros: Only hype is created by buying all the reviewers it seems
Cons: The Wealthy People will become further pampered if you take this fit for nothing movie seriously
zumba on 22nd Oct 2013, 10:59am | Permalink
what a nice paid review ! I would like to know how much you get paid to write a piece of crap like this.
the fullhyd.com editor on 22nd Oct 2013, 7:30pm | Permalink
@zumba: we have been asked this question earlier, and you'll get some hints here:

http://forums.fullhyderabad.com/viewtopic.php?f=20&t=19475
critic roshan on 27th Oct 2013, 2:27am | Permalink
shows us a lame response in some thread and chickens out
deepak on 17th Oct 2013, 8:17pm | Permalink
a Masterpiese from Trivikram and Pawan..an enjoyable ride ..
ram on 15th Oct 2013, 3:55am | Permalink
boring and worst music has given...
music is backdrop for this movie.
Sri on 11th Oct 2013, 10:18pm | Permalink
Bad movie.The comedy track with Brahmi is irritating.The story is not at all good.
THere is one scene in movie which i felt vey bad.
Hero making his men carry his shoes.Man what kind of message you are giving .Is it waht so called Pawanism
Praveen on 11th Oct 2013, 3:11pm | Permalink
Ridiculous Movie and even more Ridiculous review by FH. Shame on your part.
Think of dignity and conscience before writing such reviews.
Disillusioned on 7th Oct 2013, 2:13pm | Permalink
I truly cannot believe that this movie was given a rating of 8.5 while Lunch Box got an 8.0. Please tell me that Full Hyderabad has not got sold..........I am fairly disillusioned. Expected better. This movie was, at best, ok. PK was energetic that is about all. Storyline, editing everything else was commonplace. Better than Lunch Box? How the mighty Full Hyd have fallen!
2power10 on 7th Oct 2013, 10:46am | Permalink
I watched this movie, and found 3 things offensive:

1. The obscenely rich people with large houses, massive dining tables and gigantic swimming pools
2. The obscenely rich hero declaring how rich he is and hinting that that gives him the right to slap his butlers around. Dude, Pawan Kalyan, what kind of an example are you setting for your already rabid and silly fans?
3. Samantha. This woman is fast beating Genelia in the irritating-heroine department. Thing is, she's stopped bothering with the lip sync. The upper part of her face doesn't move. Her pout looks Botoxed. What a bimbette.

The movie reeks of filthy rich people, and this is pretty sickening. AD is a film you can watch on the first day perhaps, with a lot of fans adding to the excitement.
RATING
5
Hari on 6th Oct 2013, 4:33am | Permalink
Just got to watch this movie. What a disaster!!! FH reviewers are usually quick to take out their most scathing and sarcastic pens (or keyboards) out for scenes like the one at the railway station in this movie but nothing seems to be wrong here. What exactly is Mr. Trivikram's thinking? Forget suspension of disbelief. You need to bury it six feet under to wrap your head around this crap. What was all that slapping around ? If you are rich enough you can slap your employees is the message the makers want to convey. Disgusted that my money is also a part of this movie's revenue. This movie is not even worth pirating. What is with FH and big movies? Orange, Teen Maar, Badshah, Businessman
RATING
1
RamanaMurthy on 4th Dec 2013, 12:52pm | Permalink
Excellent Hari... I fully agree with you...
RamanaMurthy on 4th Dec 2013, 12:52pm | Permalink
Excellent Hari... I fully agree with you...
cherry on 4th Oct 2013, 4:52pm | Permalink
keka
surekha on 2nd Oct 2013, 11:09pm | Permalink
I usually read the review on fullhyd before watching a new movie. But with this review, fullhyd has lost its credibility. 8.5 rating for this crap is ridiculous. Strangely i am more disgusted with the review than with the movie.
GoKo on 2nd Oct 2013, 11:06pm | Permalink
Now that the movie itself is quite an entertainer, there is no second thought about this movie being a hit. Good and just entertaining movie. Nothing to write about Pawan.

But very sad movie for Trivikram. He going the same way as Puri J. Into the drain. Write some punch dialogues, then glue some story around them and insert few random foreign locations as songs. What a pity Mr. TriV.

Secondly, the neo rich portrayal of human behavior by Pawan is a dangerous trend. People will start acting like him and think its cool attitude. It is a sick attitude. But who is going to tell them anyway.
RATING
6
GoKo on 2nd Oct 2013, 11:04pm | Permalink
Now that the movie itself is quite an entertainer, there is no second thought about this movie being a hit. Good and just entertaining movie. Nothing to write about Pawan.

But very sad movie for Trivikram. He going the same way as Puri J. Into the drain. Write some punch dialogues, then glue some story around them and insert few random foreign locations as songs. What a pity Mr. TriV.

ADVERTISEMENT
This page was tagged for
Attharintiki Daredi telugu movie
Attharintiki Daredi reviews
release date
Pawan Kalyan, Samantha
theatres list
Follow @fullhyderabad
Follow fullhyd.com on
About Hyderabad
The Hyderabad Community
Improve fullhyd.com
More
Our Other Local Guides
Our other sites
© Copyright 1999-2009 LRR Technologies (Hyderabad), Pvt Ltd. All rights reserved. fullhyd, fullhyderabad, Welcome To The Neighbourhood are trademarks of LRR Technologies (Hyderabad) Pvt Ltd. The textual, graphic, audio and audiovisual material in this site is protected by copyright law. You may not copy, distribute, or use this material except as necessary for your personal, non-commercial use. Any trademarks are the properties of their respective owners. More on Hyderabad, India. Jobs in Hyderabad.