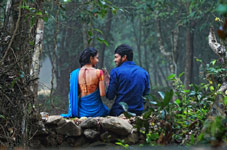 Ravi Kandala / fullhyd.com
EDITOR RATING
3.0
Performances
Script
Music/Soundtrack
Visuals
3.0
3.0
3.0
6.0
Suggestions
Can watch again
No
Good for kids
No
Good for dates
No
Wait for OTT
No
Film reviewers should be sequestered like juries. They should not be allowed to read interviews of the cast and crew days before a release. This is because the interviews make you think that the movie in question is truly different. This is especially true when the director is someone like Teja - someone we know speaks his mind out and hardly minces words.

So when Teja tells you that he's waited ten years and made this script with a new story, you tend to believe him - after all, here's a guy who bluntly accepts his failures. You go with an open mind thinking that the guy has probably given up his maverick ways, gone back to his roots and made something entertaining. Alas, the end result brings you crashing down and makes you go back and take a second look at those interviews - were all these things said about the movie you just watched, is the question that'll be the foremost on your mind.

Hora Hori has Basava (Chaswa), a rowdy-sheeter falling in love with Mythili (Daksha), the sister of a police officer. Basava asks for her hand, and is promptly thrown out. He then proceeds to get two of her prospective suitors murdered right in front of her eyes. Mythili goes into shock and is taken to Agumbe in Karnataka by her family for recovering.

In Agumbe, Mythili meets Skanda (Dilip), who runs a printing press with his grandmother. Skanda sees Mythili typing with one finger, is impressed, and asks her to help him win a typing competition with the adjacent village. The competition is a best-of-three where the person typing the highest number of characters in a minute wins.

Mythili types some 297 characters and loses the first round. Skanda then decides to teach her typing with more fingers than one. He paints the keys on the keyboard with different colours and then, painting each of her fingernails with one of the colours, asks her to match the colours while typing (let us know if you understand how that helps).

Winning round 2 of this competition helps Mythili come out of her shock, and she also falls in love with Skanda. Skanda, too, falls in love with her, but when he professes his love, Mythili rejects him as she's afraid Basava will kill him, too.

A twist in the tale has Basava meeting Skanda and starting to help him in his love story. The remaining portion of the film deals with what happens when Basava and Skanda realise that they are in love with the same girl and decide to fight it out for love.

In one of the aforementioned interviews, Teja says that it is important that the audience identify with the characters in a movie, and that that is why it is important to have a movie with a longer runtime. Hora Hori certainly has its runtime - 160 minutes - and you'll still fail to identify with any of the characters. Teja writes superficial characters and populates them with completely pedestrian actors, making you wonder if he's lost his mojo completely.

The film takes its time getting to the premise, and has some completely unnecessary comic sequences that are barely funny. There is also an item song that does nothing except increase the length of the movie.

The acting barely passes muster - Doordarshan serials have better performances. The only thing going for Hora Hori is the photography. The locations are pristine with the rains enhancing them, and the cinematography captures everything brilliantly.

Stay far away from Hora Hori if you value your sanity. And if you are a Teja fan, you'd do better to see one of his first three movies again on YouTube.
Share. Save. Connect.
Tweet
HORA HORI SNAPSHOT 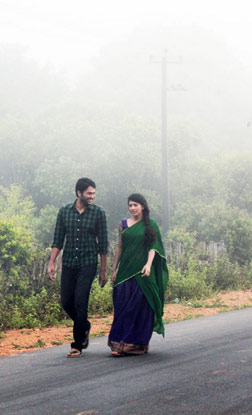 ADVERTISEMENT
This page was tagged for
Hora Hori telugu movie
Hora Hori reviews
release date
Daksha Nagarkar, Dilip
theatres list
Follow @fullhyderabad
Follow fullhyd.com on
About Hyderabad
The Hyderabad Community
Improve fullhyd.com
More
Our Other Local Guides
Our other sites
© Copyright 1999-2009 LRR Technologies (Hyderabad), Pvt Ltd. All rights reserved. fullhyd, fullhyderabad, Welcome To The Neighbourhood are trademarks of LRR Technologies (Hyderabad) Pvt Ltd. The textual, graphic, audio and audiovisual material in this site is protected by copyright law. You may not copy, distribute, or use this material except as necessary for your personal, non-commercial use. Any trademarks are the properties of their respective owners. More on Hyderabad, India. Jobs in Hyderabad.