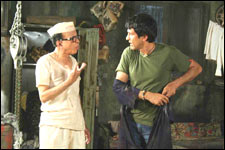 Deepa Garimella / fullhyd.com
EDITOR RATING
6.0
Performances
Script
Music/Soundtrack
Visuals
8.5
7.0
3.5
5.0
Suggestions
Can watch again
No
Good for kids
No
Good for dates
Yes
Wait for OTT
No
Guru (Kay Kay Menon) likes to make money selling cars. Sure, it's easy, but it would have been even easier if he didn't have to keep repainting every car he's about to sell. Not because the owner doesn't like the colour, but because if he didn't repaint a car he's about to sell, the real owner would set the police on him.

So Guru and his senile partner Ganpath (Dilip Prabhavalkar) are in the job of pinching and touching up some neat babies on wheels, when they suddenly run into some money. There is this crore of rupees that is on its way to completing a circle through the hands of a builder Pachisia (Yashpal Sharma), a film director (Manoj Pahwa), and a gangster Faujdaar (Anupam Kher). Guru inadvertently enters this circle when he picks up a Mercedes Benz that belongs to Faujdaar, and which contains the loot that was on its way to him.

Any person in his right mind would quietly stash away the booty in a completely unobtrusive place, and that is what Guru does. But no person would even have a mind left after Faujdaar comes to know of the goof-up. Faujdaar's henchman is sent to recover the loot, but Guru's paranoid partner, the old Ganpath, has changed its hiding place now.

It's bad enough manners to have an obscene amount of someone else's money in your garage, but it's worse manners to forget where you put it. Ganpath turns out to be the most impolite - he has a head injury while running from Faujdaar's henchman, and loses his memory. Guna starts panicking, but is thankfully given 3 more days to put together 1 crore. The only way out for him now is to partner with an erstwhile back-stabber (Rimi Sen), to pull off a heist.

Sankat City has a script that never loses its way, and the endless circle of con jobs keeps you hooked throughout. The idiosyncrasies of each character, coupled with well-written situations, are what make the film devoid of any loopholes. Though not atrociously funny, the humour is understated, and is there throughout the film.

The director has done a great job of casting - not a single character is out of place, and except for Chunky Pandey's overdone ham and his atrocious Hyderabadi accent, not a single performance is sub-par. Anupam Kher, in particular, has lots of fun in his role as the sadistic gangster with pronunciation issues. The rest are all accomplished artistes, and they're the kinds who'd have done just as great if they all switched roles among themselves.

Watch Sankat City in a multiplex, as this is low-budget, and needs all the indoor props (good projectors and sound systems) it can get. The music can put you to sleep, and worse, distance you from the film, which otherwise is well-paced.

Carry your smarts with you when you head for Sankat City - it must have been so long since you did that, that it's probably funny.
Share. Save. Connect.
Tweet
SANKAT CITY - SABKA... SNAPSHOT
SANKAT CITY - SABKA BAND BAJEGA SNAPSHOT

ADVERTISEMENT
This page was tagged for
Sankat City - Sabka Band Bajega hindi movie
Sankat City - Sabka Band Bajega reviews
release date
Kay Kay Menon, Rimmi Sen
theatres list
Follow @fullhyderabad
Follow fullhyd.com on
About Hyderabad
The Hyderabad Community
Improve fullhyd.com
More
Our Other Local Guides
Our other sites
© Copyright 1999-2009 LRR Technologies (Hyderabad), Pvt Ltd. All rights reserved. fullhyd, fullhyderabad, Welcome To The Neighbourhood are trademarks of LRR Technologies (Hyderabad) Pvt Ltd. The textual, graphic, audio and audiovisual material in this site is protected by copyright law. You may not copy, distribute, or use this material except as necessary for your personal, non-commercial use. Any trademarks are the properties of their respective owners. More on Hyderabad, India. Jobs in Hyderabad.