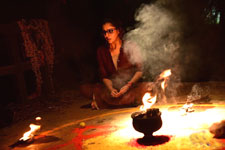 Josh / fullhyd.com
EDITOR RATING
6.0
Performances
Script
Music/Soundtrack
Visuals
7.0
6.0
6.0
6.0
Suggestions
Can watch again
No
Good for kids
No
Good for dates
Yes
Wait to rent it
No
Ten years is the very definition of longevity in an actress' career. After those ten years, you'll often come across films where the actress stars alone, and these films are of a narrow set of genres - women-centric, horror(-comedy) and police stories. And, yes, we forgot prostitutes. And all these films share another characteristic - they smell of desperation.

Dora however doesn't. You'd think it's a horror film, too, because it features a car which is possessed by a spirit. Or maybe a horror-comedy at best because this spooky car lands in the hands of Parijatam (Nayantara) and her father Vaikuntham (an over-the-top but adorable Thambi Ramaiah) who are a loony duo trying to ply this possessed car as a call taxi. But there's the catch. It is neither a horror film nor a comedy.

So, there's a ghost, and the daughter-father pair are loony, and yet it is not a horror comedy? Well, it isn't because Dora has other things to focus on. Because, like all spirits do, the car's spirit too has unfinished business with the world, which Parijatam and pops get embroiled in. And to make matters a little complicated, they have a sturdy police officer (Harish Uthaman) hot on their chase.

The spirit and the jokes just lead up to an actually interesting story, and the makers have spent enough effort to tell it well. The one big twist in the film is a little laughable but the way it's shot is what makes the difference. And Dora is full of that earnest work on the part of practically everyone in the crew. The guitar riffs, the bright colourful frames, the VFX (creative if not realistic) and the performances all do their bit to keep you involved.

And it's a pleasure to see Nayantara own a frame. True to her recent makeover, she looks gorgeous without having to even hint at anything sexual. The lovely hues on her kurtis, the casual coolness of her tops and leggings, and the geeky glasses make sure we're drawn to her presence on the screen but we don't really find a moment where the makers are asking us to ogle.

However, the makers are definitely asking us to buy her as a star. And the gratifying part is you don't find any difficulty in doing so. Nayantara is more confident than most of our noob heroes who look like they'd rather be somewhere else. When she's goofy, you see no problem with it. When she's kicking butt, you aren't questioning the logic. And when she succeeds and walks with that cool swag, you know it's time to hoot. That's when you grasp the reason this film doesn't smell of desperation. Our long-living actress is doing this film not because she can't find any heroes who'll act with her but because she simply doesn't need a hero.

Some films try to be intelligent. Some others are happy being clever. Dora is of the second sort. If you indulge it, you'll come out entertained. The gratuitous use of rape as a plot point is disturbing and a tad disgusting. So we recommend you take no children with you. However, you're unlikely to regret your own trip to the cinema for this one.
Share. Save. Connect.
Tweet
DORA SNAPSHOT 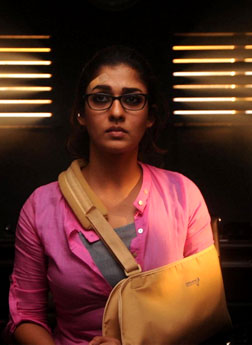 ADVERTISEMENT
This page was tagged for
Dora telugu movie
Dora reviews
release date
Nayanthara, Thambi Ramaiah
theatres list
Follow @fullhyderabad
Follow fullhyd.com on
About Hyderabad
The Hyderabad Community
Improve fullhyd.com
More
Our Other Local Guides
Our other sites
© Copyright 1999-2009 LRR Technologies (Hyderabad), Pvt Ltd. All rights reserved. fullhyd, fullhyderabad, Welcome To The Neighbourhood are trademarks of LRR Technologies (Hyderabad) Pvt Ltd. The textual, graphic, audio and audiovisual material in this site is protected by copyright law. You may not copy, distribute, or use this material except as necessary for your personal, non-commercial use. Any trademarks are the properties of their respective owners. More on Hyderabad, India. Jobs in Hyderabad.