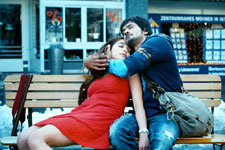 Kritika Deval / fullhyd.com
EDITOR RATING
4.0
Performances
Script
Music/Soundtrack
Visuals
4.5
3.5
6.0
6.5
Suggestions
Can watch again
No
Good for kids
No
Good for dates
No
Wait to rent it
Yes
You might assume that a Telugu film titled Romeo is named so solely because the hero is a "romeo"-type lover boy. Shockingly enough, you would be only partially correct in your assumption. You see, in a major departure from Tollywood tradition, the title Romeo actually has something to do with the plot, in that it is set in Rome (which you, as our wise readers, will recognize as part of the title) and in Verona, which is where Shakespeare's famous play Romeo And Juliet is famously set (probably a more likely reason).

However, departures from tradition halt exactly there as our free-spirited NRI heroine Samantha (Adonica) and Vizag boy Kittu (Sairam Shankar) meet by accident in Rome, and then proceed to do exactly as Tollywood-ians do.

Penned by Puri Jagannadh - who has in recent times given us such deeply sympathetic and relatable romantic characters in films such as this one, this one, and this one, Romeo tells the tale of Indian-origin American Samantha and her journey of self-discovery to Rome, until a character called Kittu starts showing up at all kinds of places. The two become friends and more over the span of several gorgeous locations and a couple of songs.

Pretty soon, though, this idyllia is shattered when Samantha makes the big reveal that - *spoiler alert* - she has a boyfriend back home in the US, and her passport is stolen, and the scene shifts to Verona as Kittu tries to sneak her out of Rome while trying to deal with this new information.

Sure, none of this is exactly new. However, Romeo is probably the most innovative we can expect Tolly-royalty to get where family is involved, in that the locations are less tired, and Adonica actually looks like a real girl.

As far as the plot is concerned, it is exactly as "fresh" as any "youthful entertainer" to walk out from underneath a Big Banner, with a stalker hero and a heroine chalked out with all the compassion for the female gender Jagannadh seems to be left with. The problem with the story, haphazard enough as it is, is compounded by an even more haphazard screenplay, which is further burdened by thoroughly incompetent editing. All of this is rather sad as the visuals of the sun-kissed Italy are rather magnificent.

The silver lining for those who find themselves stuck in a theatre playing this bastion of mediocrity are the catchy songs, which, although placed extremely awkwardly, feature the aforementioned visuals and are actually enjoyable.

Sairam Shankar is consistently tired-looking and creepily omnipresent. Adonica is exactly as chirpy and annoyingly accented as you can imagine. Neither of the leads plays characters whole enough for you to make further judgement. The rest of the cast make appearances too rare and short-lived to make much of a mark, and most of them only appear when what remains of the plot has already fallen apart.

Also, there is a TWIST. (Hello again!)

While there is the rare dialogue that is penned with flair, most of the lines seem like random sentences forced out through a severe writer's block. It does not help that the farther along we get into the movie, the farther away the ending to this relatively short film seems, with the "climax" easily making for the longest you are ever likely to experience. And not in a nice way, either. (Sorry, the joke was right there).

When all that a film has to its credit are elements that are already being played on TV day-in and day-out, chances are that your 100-or-so bucks can safely be put to better use. However, considering its only competition this weekend, we will not blame you for giving it a shot.
Share. Save. Connect.
Tweet
ROMEO SNAPSHOT 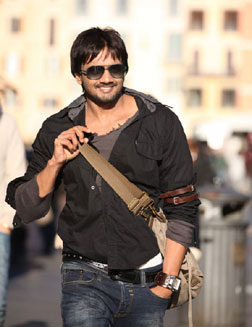 ADVERTISEMENT
This page was tagged for
Romeo telugu movie
Romeo reviews
release date
Sairam Shankar, Adonica
theatres list
Follow @fullhyderabad
Follow fullhyd.com on
About Hyderabad
The Hyderabad Community
Improve fullhyd.com
More
Our Other Local Guides
Our other sites
© Copyright 1999-2009 LRR Technologies (Hyderabad), Pvt Ltd. All rights reserved. fullhyd, fullhyderabad, Welcome To The Neighbourhood are trademarks of LRR Technologies (Hyderabad) Pvt Ltd. The textual, graphic, audio and audiovisual material in this site is protected by copyright law. You may not copy, distribute, or use this material except as necessary for your personal, non-commercial use. Any trademarks are the properties of their respective owners. More on Hyderabad, India. Jobs in Hyderabad.