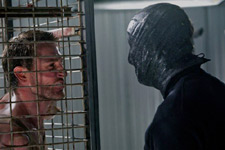 Nupur Barua / fullhyd.com
EDITOR RATING
4.0
Performances
Script
Music/Soundtrack
Visuals
4.0
5.0
6.0
5.0
Suggestions
Can watch again
No
Good for kids
No
Good for dates
No
Wait for OTT
No
Every genre of film has its audience, and this century has already seen more than its fair share of splatter movies, but that does not stop Hollywood from churning out more and more sub-standard versions of Saw and the likes. With the release of The Collection, a sequel to the gory The Collector, the makers have proved, yet again, that art is not for the faint-hearted alone, and that as long as there are obsessed fans of the genre, torture porn and similar movies are not going to be outdated any time soon.

The Collection begins by introducing to us a young girl named Elena (Emma Fitzpatrick), who lives alone in a mansion with her father (Christopher McDonald). Two events - the death of her mother and a childhood accident - have brought them closer, but she does have her own friends outside this little world. It is with one of these friends that Elena sneaks out to a secret underground party one night, only to discover that her boyfriend (who had begged out of a date) is already there, making out with some other girl.

A disgusted Elena punches the boyfriend and looks around for a place to be alone. She finds an unoccupied room, and as she calms down, she notices a red trunk there. She opens it to find a bloodied Arkin (Josh Stewart) inside. In the meantime, the Collector has joined the party.

Arkin manages to escape from the venue, but the Collector kidnaps Elena. Given his criminal record, Arkin is arrested as he recuperates in hospital. This is where Lucello (Lee Tergesen) visits him, and recruits him to his group of mercenaries who are hired by Elena's father to find her. Arkin is the only one who can lead them to the Collector's hide-out (refer to The Collector).

The rest of the movie concentrates on Elena trying to find her way out from the Collector's lair, Arkin trying to escape the mercenaries and the villain, and the Collector trying to kill all of them. Many gory deaths and endless corridors later, the movie arrives at a conclusion, paving the way for the next sequel.

The film is a little under one-and-a-half hours, but it seems to go on forever. The story does not move forward for the longest time, and the characters constantly walk around through strange halls, lift chutes, corridors, basements, vent passages and so on. The movie is more like a visual manual for those interested in new ways to torture people and then kill them, preferably making a bloody mess while they are at it.

Certain flashbacks that seem interesting have no relevance to the story. In fact, they look like an attempt to add intrigue into the narration, and then forgotten about. The movie is not about human relationships, but about twisted minds nonchalantly trying to outsmart the master deviant. Surprisingly, the cops are pretty incompetent and dull, which is unusual for a country that worships (at least in the movies) its police force.

The actors are straight out of a B-grade movie. Josh Stewart, clearly trying to impersonate Sean Penn, mumbles through pursed lips and gritted teeth (except when he abuses), and one is not sure why he is the hero. Emma Fitzpatrick is pretty, but very misguided. The rest of them look like they are a part of a spoof, and the Collector himself is anything but menacing.

The production and costume designs are nothing to write home about - not that you can see anything with all that blood. Most of the sets seem inspired by other movies of the genre, and lack originality. The only innovative props that catch your eye (if you can overlook the hooks, saws, blades, and other things that draw blood) are the human skeletons rearranged to look like insect skeletons.

Completely avoidable and unintentionally funny, The Collection is just another example of bad art, no matter where your tastes lie. It can only appeal to a crazed horror enthusiast who does not mind bad lighting, bad acting and bad visuals. If you are in the mood for torture, watch Saw (the first part), and cringe.
Share. Save. Connect.
Tweet
THE COLLECTION SNAPSHOT 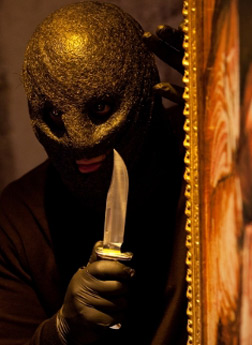 ADVERTISEMENT
This page was tagged for
The Collection english movie
The Collection reviews
release date
Josh Stewart, Randall Archer
theatres list
Follow @fullhyderabad
Follow fullhyd.com on
About Hyderabad
The Hyderabad Community
Improve fullhyd.com
More
Our Other Local Guides
Our other sites
© Copyright 1999-2009 LRR Technologies (Hyderabad), Pvt Ltd. All rights reserved. fullhyd, fullhyderabad, Welcome To The Neighbourhood are trademarks of LRR Technologies (Hyderabad) Pvt Ltd. The textual, graphic, audio and audiovisual material in this site is protected by copyright law. You may not copy, distribute, or use this material except as necessary for your personal, non-commercial use. Any trademarks are the properties of their respective owners. More on Hyderabad, India. Jobs in Hyderabad.