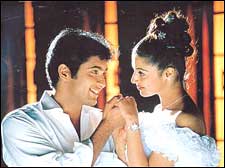 Mithun Verma / fullhyd.com
EDITOR RATING
5.0
Performances
Script
Music/Soundtrack
Visuals
NA
NA
NA
NA
Suggestions
Can watch again
NA
Good for kids
NA
Good for dates
NA
Wait to rent it
NA
Sad endings are usually not well received by cinema aficionados. It kills you to see that the movie you spilt your blood and sweat in the line for, turns out to be really sad. The correct ending for your efforts should be an entertaining flick - an aging man with one leg in the grave and one leg around a heroine's ripe naval, annihilating an army of towering thugs by hitting the air in front of their faces. Now, that's what we call a great ending.

Love Today doesn't fit into either of these endings. It scathes the underside of 'desperately trying to be classy', and ends up facedown in a heap of despair. Just like Uday Kiran when he recollects all the squabbles with his "lover", and the one irreparable spat with her...

Actually, they collide in mid-traffic, and she lectures him on etiquette in the middle of the road. Uday thought she looked cute when she was angry. Though absolutely no one in the audience knew what her expression was, Uday knew that it was "anger". Experience does matter in such things, you know.

The heroine knew a bit of English cinema, it seems. Because when Uday proposes, she asks him to write his name on a hundred-rupee note, which she casually trades off for an ice cream. If Uday's love is true, that note will return to her. That's what happened with John Cusaak in Serendipity.

The note does return. It had to. What the hell would the music director do with all the songs, if it did not? But things are not all peachy as in the beginning. Soon, the couple has its first fight. The hero is stood-up. This greatly rubs him in all the wrong places. He's mad at the heroine for not remembering their rendezvous. He's madder at her for not remembering an invention called the telephone.

From that day forth, things only seem to tumble downhill. The general angst of the couple increases to the point of no return. Their falling-out worsens and they finally break up.

However, they meet again after a couple of years, and things are set back into their own place. Remember this line.

Divya Koshal was with Salman Khan in a music video. What can anyone who's done a video with Salman Khan learn, except baring all? But that's what smarts the most - she did not learn that either!

The story aimed at dealing with nipping the petty differences in love at an initial stage, and how not doing so can be fatal. As said, the story only aimed, it never took the shot. The music is passable, and so are Sunil and the others.

When the crux of the movie is about dealing with misunderstandings, they should've at least tried to show some remotely sensible reason for all the squabbles. With such an effort from the makers' side, the outcome is only ordinary.

ADVERTISEMENT
This page was tagged for
download uday kiran love today full movie
Love Today Telugu movie download
love today Full movie in Telugu download
love today (2004 telugu full movie)
telugu movie love today
Follow @fullhyderabad
Follow fullhyd.com on
About Hyderabad
The Hyderabad Community
Improve fullhyd.com
More
Our Other Local Guides
Our other sites
© Copyright 1999-2009 LRR Technologies (Hyderabad), Pvt Ltd. All rights reserved. fullhyd, fullhyderabad, Welcome To The Neighbourhood are trademarks of LRR Technologies (Hyderabad) Pvt Ltd. The textual, graphic, audio and audiovisual material in this site is protected by copyright law. You may not copy, distribute, or use this material except as necessary for your personal, non-commercial use. Any trademarks are the properties of their respective owners. More on Hyderabad, India. Jobs in Hyderabad.