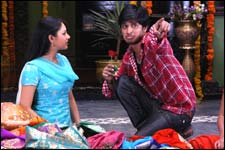 Deepa Garimella / fullhyd.com
EDITOR RATING
5.0
Performances
Script
Music/Soundtrack
Visuals
6.5
4.0
5.0
6.0
Suggestions
Can watch again
No
Good for kids
Yes
Good for dates
Yes
Wait to rent it
Yes
Veedu Theda is a standard-issue low-budget formula film, watchable only because of its attempts at comedy. The village smart-ass finding a girl and overcoming goons to win her is a theme done to death, and the makers of Veedu Theda have no compunction in churning out the same tale again.

Katthi Seenu (Nikhil Siddharth) is at a wedding, thanks to Luv Kumar (Ali), and he falls in love with Meghna (Pooja) there. The wedding is abuzz with activity, and he succeeds in befriending Meghna amidst the festivities. However, Meghna is averse to love, and has dreams of becoming an IAS officer. Hence, she asks Seenu to go fly a kite.

Then comes the twist - Meghna is kidnapped right in front of Seenu, and she cries out to him for help. Convinced that he needs to save her, Seenu sets off on a journey of finding out what Meghna's past is and why she was kidnapped.

Veedu Theda won't entertain you if you're looking for something different. It follows a jaded storyline, and has an unspectacular cast. However, the humour is the no-fuss kind. The movie has jokes that you wouldn't care to remember and narrate to a friend, but that make you chuckle all the same. They humour is clean, by the way.

One of the sadder parts of the movie is that there's hardly any romance. The lead couple is fairly good-looking, and deserves to have more of a love story than they seem to have.

There seems to be an opportunity here for Nikhil Siddharth to go the Allari Naresh way of sticking to simple, low-cost comedies set in villages. He has the potential to create a similar niche for himself if he keeps at it for a couple of years. He's energetic and bright, and the only thing going against him might be the fact that he still looks puny (one of the reasons that the fights in Veedu Theda are most unconvincing).

The heroine Pooja suffers from bad lip sync and has hardly anything to do. She makes the least impact amongst the entire cast in the movie.

Ali as Luv Kumar, Venu Madhav as local goon Udutha Bhaskar, Master Bharat as the bride's brother, and M S Narayana as the "stage artiste" Pachchi Pulusu are fun. The person playing Seenu's bearded sidekick deserves credit for a few hilarious moments. Sayaji Shinde and Suman are good. However, Brahmanandam's role as a fake swami fails to elicit so much as a grin.

The music is quite boring, with the songs having been composed for the masses, and the visuals are above average.

In all, this is average fare, and can be watched only if options do not exist.
Share. Save. Connect.
Tweet
VEEDU THEDA SNAPSHOT

ADVERTISEMENT
This page was tagged for
Veedu Theda telugu movie
Veedu Theda reviews
release date
Nikhil Siddharth, Pooja
theatres list
Follow @fullhyderabad
Follow fullhyd.com on
About Hyderabad
The Hyderabad Community
Improve fullhyd.com
More
Our Other Local Guides
Our other sites
© Copyright 1999-2009 LRR Technologies (Hyderabad), Pvt Ltd. All rights reserved. fullhyd, fullhyderabad, Welcome To The Neighbourhood are trademarks of LRR Technologies (Hyderabad) Pvt Ltd. The textual, graphic, audio and audiovisual material in this site is protected by copyright law. You may not copy, distribute, or use this material except as necessary for your personal, non-commercial use. Any trademarks are the properties of their respective owners. More on Hyderabad, India. Jobs in Hyderabad.