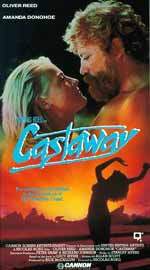 Ajay Bhashyam / fullhyd.com
EDITOR RATING
1.0
Performances
Script
Music/Soundtrack
Visuals
NA
NA
NA
NA
Suggestions
Can watch again
NA
Good for kids
NA
Good for dates
NA
Wait to rent it
NA
I suppose clarifications are in order - no, this is not the Tom Hanks starrer; yes, the main idea is the same except that this time there are two people, a man and a woman, and they are cast away by choice.

The next part of the story is really confusing because there are two ladies who look alike; Joe marries one of them for immigration reasons, sleeps with one of them (might even be the same one for all I know), and goes with both of them to the island. Lucy is staying with Joe on the island but Janet is the one calling him 'honey' and 'darling' and other such terms of endearment. And a little later, Joe and Lucy are supposed to be husband and wife. The large number of cuts doesn't help at all, let me tell you.

Anyway, that's about all there is to the story, really. They keep bickering all the time, figure out how to fish and feed themselves and all the other usual castaway things. Only, they are not looking for a way out!

Once, when Lucy is pregnant and they are almost dying of disease, missionaries from some nearby island come and save their lives and Joe even lands a job as a handyman on that island. Anyway, they do get back after their year is up, but we aren't told what happens next. A few disjointed scenes later, we are told it's time to go. And we do so gladly.

For the voyeurs, the heroine is either buck naked or at least topless throughout the movie. I mean, it is after all a tropical island and it must be hot. But even that the audience aren't destined to enjoy because you-know-who played baddy again. And there are no 'scenes' as such, to boot. This is a nothing movie - QED.
Share. Save. Connect.
Tweet
CASTAWAY SNAPSHOT

ADVERTISEMENT
This page was tagged for
Castaway english movie
Castaway reviews
release date
Oliver Reed, Amanda Donohoe
theatres list
Follow @fullhyderabad
Follow fullhyd.com on
About Hyderabad
The Hyderabad Community
Improve fullhyd.com
More
Our Other Local Guides
Our other sites
© Copyright 1999-2009 LRR Technologies (Hyderabad), Pvt Ltd. All rights reserved. fullhyd, fullhyderabad, Welcome To The Neighbourhood are trademarks of LRR Technologies (Hyderabad) Pvt Ltd. The textual, graphic, audio and audiovisual material in this site is protected by copyright law. You may not copy, distribute, or use this material except as necessary for your personal, non-commercial use. Any trademarks are the properties of their respective owners. More on Hyderabad, India. Jobs in Hyderabad.