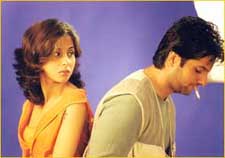 Bhargav Shastry / fullhyd.com
EDITOR RATING
7.5
Performances
Script
Music/Soundtrack
Visuals
NA
NA
NA
NA
Suggestions
Can watch again
NA
Good for kids
NA
Good for dates
NA
Wait to rent it
NA
Slickness. That's where the admen-turned-directors score over others. They have been taught to tell a whole story, impress the viewers and sell a product before you can say "10 seconds". And here's an adman, Rajat Mukherjee, doing a splendid job of his first directorial assignment, given to him by Ram Gopal Verma, the man who has given birth to a genre of hard-hitting, low budget films with themes that are inspired in the right manner. This film has been inspired from the Michael Douglas-Glenn Close starrer, Fatal Attraction. Mukherjee ensures a stylish execution of the script with some very powerful performances from the cast backing him.

Ria (Urmila) is the deliriously adamant daughter of a millionaire. Jai (Fardeen Khan) is a talented and a flirtatious fashion photographer. Their first meeting is not so pleasant - Jai, always on the lookout for some fresh faces, takes some snaps of her exercising in a beach, and later uses these snaps in the launch of a fashion magazine. The initially snooty Ria is eventually persuaded by Jai to start modeling, which she accepts. She becomes a successful model under Jai's tutelage. She also falls for Jai's attitude and charm, and mistakes his flirtatious nature to be a reciprocation of her love.

But she is shattered to discover that he is already married to Geeta (Sonali Kulkarni). Her love, aided by her adamancy, transforms into obsession, and she makes life miserable for Jai and Geeta with her suicidal threats and attempts to create a rift between the couple. When all fails, she turns diabolical and even attempts to kill Geeta, with the denouement being a very touching climax.

There is not one scene in the film that appears dragging or out of place, courtesy some very slick editing. Fardeen oozes style with his handsome features and, surprisingly, acts well too. His seeming vulnerability makes him tailor-made for this role. A guy who looks good, acts well and is a part of some good scripts is always welcomed by the audience. Sonali Kulkarni, the numero uno of Marathi films, looks gorgeous and plays her role, that of a wife who fears her husband being snatched away, to the hilt.

But the thunder-stealer is Urmila as the scorned Ria. Her transformation on screen as a glamorous model in the first half to a battered, diabolical character in the second is amazing. She gives a stellar performance, doing full justice to the negativity of the role. An example of that in the film is the scene when she desperately waits for Jai's phone call. There is always a chance to go overboard and start hamming in such roles, but Urmila underplays it to perfection.

The music is in sync with the script and adds to the simplicity of the script. The song 'Kambakht Ishq' is very well choreographed, and Sandeep Chowta's background music is almost a character in the film. Ram Gopal Verma lives up to the expectations his banner creates. Few would wag their tongues if he manages to bring out the best in Urmila. This one is a winner all the way.
Share. Save. Connect.
Tweet
PYAAR TUNE KYA KIYA SNAPSHOT

ADVERTISEMENT
This page was tagged for
Pyaar Tune Kya Kiya hindi movie
Pyaar Tune Kya Kiya reviews
release date
Fardeen Khan, Urmila Matondkar
theatres list
Follow @fullhyderabad
Follow fullhyd.com on
About Hyderabad
The Hyderabad Community
Improve fullhyd.com
More
Our Other Local Guides
Our other sites
© Copyright 1999-2009 LRR Technologies (Hyderabad), Pvt Ltd. All rights reserved. fullhyd, fullhyderabad, Welcome To The Neighbourhood are trademarks of LRR Technologies (Hyderabad) Pvt Ltd. The textual, graphic, audio and audiovisual material in this site is protected by copyright law. You may not copy, distribute, or use this material except as necessary for your personal, non-commercial use. Any trademarks are the properties of their respective owners. More on Hyderabad, India. Jobs in Hyderabad.