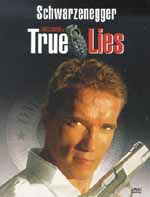 Chinmayi Sirsi / fullhyd.com
EDITOR RATING
7.0
Performances
Script
Music/Soundtrack
Visuals
NA
NA
NA
NA
Suggestions
Can watch again
NA
Good for kids
NA
Good for dates
NA
Wait for OTT
NA
True Lies is one of those movies that you don't really have to believe in to enjoy. And a good thing that is, since if belief were the criterion, True Lies would fall flat on its smirking face. But since the movie is so much fun and quite honest about being not-so-credible, we can, for once, overlook the fact that we are being taken for a ride. It's a pretty good ride.

Though familiar, the story does have its moments, and we've learnt over the years that it's the handling that counts, haven't we? Well, Cameroon handles it well, if at times a little too flippantly. Harry Tasker (Schwarzenegger) is a spy who leads a double life as a sales representative for the benefit of his family. So when he is busy tracking down a terrorist organization that threatens national security, his wife Helen (Jaime Lee Curtis) is left complaining to her friend about his long work-hours ("it's not like he's saving the world or something").

After chasing the terrorist Salim Abu Aziz (Art Malik) all over town on horseback (which, by the way, is one of the really good action scenes), Harry walks home, late again. The next day he overhears a telephone conversation that makes him suspect that Helen's having an affair. A large part of the movie deals with Harry and Helen's relationship, though not very seriously. And it does get funny.

The second part, of course, deals with how Harry saves the world from nuclear disaster, and in the process manages to save both his wife and his daughter Dana from horrible deaths. The terrorist organization Crimson Jihad headed by Salim Abu Aziz threatens to blow up a city an hour if their demands are not met, and prepares to blow up an uninhabited island to demonstrate its power. But it makes one big mistake - it brings Harry to the island. They should have better!

Arnold Schwarzenegger does what's expected of him with élan (as long as you don't expect him to really act!), and is at times rather endearing. Jaime Lee Curtis as the bored wife of a sales rep who just want some pep in her life is as unconvincing, but, as we decided earlier, that isn't really the issue here, is it? She does the job.

True Lies is the kind of movie that deliberately shies away from seriousness. A current of humor runs through it, and even the most tense scenes are peppered generously with funny one-liners. And it is all very, very American, flippant and light - even the violent scenes aren't really gory or saddening, and in the end the bad guys lose and none of the good guys die or even lose a limb! What you do not quite like is that Cameroon does not even make an attempt to add some genuine credibility to the movie.

This, like I said, is comedy as much as it is action. If you've missed it, and are in a mood for some slick, fast-paced sequences sprinkled with good-natured humor, watch True Lies.
Share. Save. Connect.
Tweet
TRUE LIES SNAPSHOT

ADVERTISEMENT
This page was tagged for
true lies full movie
True Lies full English movies
True Lies english movie
True Lies reviews
release date
Follow @fullhyderabad
Follow fullhyd.com on
About Hyderabad
The Hyderabad Community
Improve fullhyd.com
More
Our Other Local Guides
Our other sites
© Copyright 1999-2009 LRR Technologies (Hyderabad), Pvt Ltd. All rights reserved. fullhyd, fullhyderabad, Welcome To The Neighbourhood are trademarks of LRR Technologies (Hyderabad) Pvt Ltd. The textual, graphic, audio and audiovisual material in this site is protected by copyright law. You may not copy, distribute, or use this material except as necessary for your personal, non-commercial use. Any trademarks are the properties of their respective owners. More on Hyderabad, India. Jobs in Hyderabad.