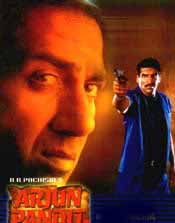 Chinmayi Sirsi / fullhyd.com
EDITOR RATING
5.0
Performances
Script
Music/Soundtrack
Visuals
NA
NA
NA
NA
Suggestions
Can watch again
NA
Good for kids
NA
Good for dates
NA
Wait to rent it
NA
Yes, Ghayal was a masterpiece, and Sunny Deol as a wounded, wronged victim of the "system" proved his point brilliantly. But to keep giving him similar roles and to expect the same magic is quite absurd, and typical Bollywoodish behavior. Sunny Deol probably keeps playing these roles as he is no stranger to the situation - he is a good actor caught up in a bad system.

Arjun Pandit has one of those highly improbable stories that only Bollywood can dream of, but powerful performances and steady direction make it tolerable and even watchable at times. Mumbai is abuzz with news about a gangster called Pandit, whose chamchas seem to be abnormally worried about the well-being of Nisha Chopra (Juhi Chawla), a starlet/dancer. When they finally take Nisha to meet Pandit, he turns out to be Arjun Dikshit (Sunny Deol).

You anticipate a long flashback, but none makes its appearance. Instead, Pandit scares Nisha, celebrates her birthday, eats enough chocolate cake to make anyone sick, and leaves you wondering where the script is going.

You soon find out. Nisha decides to marry her childhood friend, Siddharth, and this leaves us with a very angry Pandit. He abducts her (in the process killing a few policemen and burning a few cars) and threatens to marry her soon. The police, meanwhile, get their hands on Shiva, Pandit's friend and fellow-gang member, who finally offer you your flashback.

Cut to Haridwar. Arjun Dikshit is a devout and bhola-bhala professor of yoga, living with his uncle's family. The point to be noted here is that the uncle has a young daughter of marriageable age. Remember that and the story will be easy to follow.

You learn that Arjun Dikshit is the kind that mind their own business, and turns the other way when he sees "bad things" happen. Nisha comes to Haridwar as a researcher on the scriptures, and is assigned to Dikshit for reference. The two fall in love (during sessions of reading through the Kamasutra), though at this point you wonder what the vibrant and bubbly Nisha sees in the dull and lifeless Arjun.

When Sanjay, a local gangster, threatens to abduct Nisha, she provokes Arjun into killing him. With Arjun in jail, the true story shines through. It turns out that Nisha is the sister of Sangeeta, a student of Arjun, who, after being raped by Sanjay, commits suicide because Arjun who witnesses the crime refuses to testify against Sanjay. Why? Well, Sanjay threatens to do the same to Arjun's uncle's daughter (told you to keep her in mind, didn't I?), and so Arjun shuts his trap.

With her sister's rapist dead, and the man who could have saved her life in jail, Nisha decides her mission is accomplished and returns to Mumbai to resume life. But Arjun gets a pardon, and goes after her. What the director fails to convey here is the reason for Arjun's obsessive love for Nisha. Shouldn't he be angry with her for cheating him, or at least realize that the game is over?

But he plays on, getting caught up in gang wars and violence, which is just not his style (I mean Arjun's, not Sunny Deol's). The rest of the movie deals with his obsession for Nisha, her refusal to accept him, a lot of violence and a few forgettable songs in between. Surprisingly, the movie ends rather happily enough, which is usually not the case with most films of this genre.

The performances, as I said, are powerful, with Juhi Chawla being her bubbliest self in the first half and Deol doing what he does best. But the fact remains that Arjun Pandit lacks novelty and style, and gets nowhere near Ghayal in content, thereby becoming one of those movies you wouldn't benefit much by watching.
Share. Save. Connect.
Tweet
ARJUN PANDIT SNAPSHOT

ADVERTISEMENT
This page was tagged for
??????? ?????? ?????
www. arjun pandit movie samiksha hindi me kahani
full hindi movie arjun pandit
Arjun pandit movie storyline in hindi
arjun pandit movie singer name#spf=1577118200113
Follow @fullhyderabad
Follow fullhyd.com on
About Hyderabad
The Hyderabad Community
Improve fullhyd.com
More
Our Other Local Guides
Our other sites
© Copyright 1999-2009 LRR Technologies (Hyderabad), Pvt Ltd. All rights reserved. fullhyd, fullhyderabad, Welcome To The Neighbourhood are trademarks of LRR Technologies (Hyderabad) Pvt Ltd. The textual, graphic, audio and audiovisual material in this site is protected by copyright law. You may not copy, distribute, or use this material except as necessary for your personal, non-commercial use. Any trademarks are the properties of their respective owners. More on Hyderabad, India. Jobs in Hyderabad.