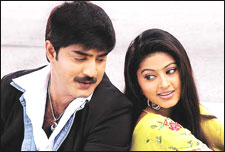 EDITOR RATING
5.0
Performances
Script
Music/Soundtrack
Visuals
NA
NA
NA
NA
Suggestions
Can watch again
NA
Good for kids
NA
Good for dates
NA
Wait to rent it
NA
Anyone who’s ever kept a pet will know that Srikanth is a good actor. He’s just as cute and cuddly, and just as spontaneous. And, unfortunately, just as successful at the box-office.

It’s actually a pity that one of Tollywood’s better actors finds his sails receiving no support from anything other than family flicks. And movies with no relevance to their titles. Indeed, the correlation between the name of this film and its content is a direct indicator of the amount of thought that went into it. Evandoi Srivaru… Oka Chinna Mata is so formula-based and low on originality, it makes a bounced mail notification look creative.

Srinu (Srikanth), a high-ranking manager, lands up newly at a flat in an apartment complex. He immediately flips for Sandhya (Nikhita), a neighbour, who doesn’t reciprocate since she doesn’t believe in long-distance relationships, and she wants to keep a long distance from him. However, Srinu isn’t one to get disheartened by such trifling setbacks, and so he starts looking for bigger setbacks. And approaches her dad Chandrasekhar (Sarath Babu), an ex-teacher.

Chandrasekhar has a flashback that results in his refusing any money sent to him. You start thinking that he’s a good person to borrow money from, but Srinu is still interested only in the daughter, and poses as an old student of Chandrasekhar. All his efforts to butter up the father, however, do not result in Sandhya feeling any warmth for him, until finally he tells her that he is not interested in her at all. Then immediately she falls in love with him. In case you are planning to try this approach in real life, please note that the results may vary from person to person, but are mostly uniform. Please post your experiences on this popular thread on our forums, titled Heartbreaks.

Anyway, now Srinu tells Sandhya that he cannot marry her since he is already married. Sandhya is understandably heartbroken – it’s like someone snatching a piece of meat away from a hungry tribal warrior. If you don’t like our metaphors, remember that we don’t like watching these movies either.

Anyway, Sandhya finds out that Srinu was married to her own sister Divya (Sneha) who left home when her father rejected her love, and that Divya is now dead. She is heart-broken again, and to find out what happens next, you’d have to watch the movie. We’ll tell you this – the movie has a unique ending. Anything to make you watch this.

The main problem with Evandoi Srivaru is the lack of attention to minor detail. The first half clearly shows Srinu trying to woo Sandhya, when in the second half he claims he was never interested in her at all. The fights involving Srikanth are unnecessary and incongruous in a family movie. Then, the comedy is just not funny enough for a low-budget movie like this that has to rely on a strong comic track.

Srikanth and Sneha turn in good performances, and so does everyone else. The music is purely average, as is everything else. The family audiences may like this one for all the emotional fluff, but it is not for the youth or the “class audience”. It’s best to wait for this one to hit the TV channels.

ADVERTISEMENT
This page was tagged for
evandoi srivaru full story
evandoi srivarutelugu movie songs
evandoi srivaru movie review
Yevandosrivaru
evandoi srivaru full movie download
Follow @fullhyderabad
Follow fullhyd.com on
About Hyderabad
The Hyderabad Community
Improve fullhyd.com
More
Our Other Local Guides
Our other sites
© Copyright 1999-2009 LRR Technologies (Hyderabad), Pvt Ltd. All rights reserved. fullhyd, fullhyderabad, Welcome To The Neighbourhood are trademarks of LRR Technologies (Hyderabad) Pvt Ltd. The textual, graphic, audio and audiovisual material in this site is protected by copyright law. You may not copy, distribute, or use this material except as necessary for your personal, non-commercial use. Any trademarks are the properties of their respective owners. More on Hyderabad, India. Jobs in Hyderabad.